'Life's Too Short' The Friend Zone #3 by Abby Jimenez 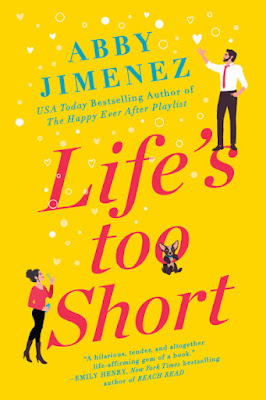 When Vanessa Price quit her job to pursue her dream of traveling the globe, she wasn't expecting to gain millions of YouTube followers who shared her joy of seizing every moment. For her, living each day to its fullest isn't just a motto. Her mother and sister never saw the age of 30, and Vanessa doesn't want to take anything for granted.

But after her half sister suddenly leaves Vanessa in custody of her baby daughter, life goes from "daily adventure" to "next-level bad" (now with bonus baby vomit in hair). The last person Vanessa expects to show up offering help is the hot lawyer next door, Adrian Copeland. After all, she barely knows him. No one warned her that he was the Secret Baby Tamer or that she'd be spending a whole lot of time with him and his geriatric Chihuahua.

Now she's feeling things she's vowed not to feel. Because the only thing worse than falling for Adrian is finding a little hope for a future she may never see.

'Life's Too Short' is the third book in Abby Jimenez's 'The Friend Zone' series - which I think is now over, completing as a trilogy.This book centres around Vanessa Price - a renowned travel-vlog YouTuber who has just been handed the responsibility of taking care of her baby niece, because her 19-year-old sister - baby Grace's mother - is a drug-dependent addict and currently spiralling. So Vanessa is grounded, for the foreseeable future. This is how she meets her building's owner and her neighbour, Adrian Copeland who is also a successful criminal lawyer. They meet when Adrian knocks on her door one night to see if he can help her calm down a wailing baby Grace and the two strike up a friendship.And that's all it can be - a friendship, because Vanessa makes it very clear that she can't get involved with anyone. That's because Vanessa has a history of ALS in her family - once known as Lou Gehrig's disease ALS is amyotrophic lateral sclerosis and it took Vanessa's aunt, mother and older sister all before they hit 30, which 29-year-old Vanessa is rapidly approaching and has early signs of same symptoms. She doesn't want to get romantically involved with anyone, and she is wholly focused on taking care of her train-wreck family, and Grace especially, before her time runs out. Adrian is a temptation she wasn't counting on, and as the two grow ever closer she begins to wonder how much marrow she can suck out of life with the time she has left ...So - look - I know that above description is going to give lots of romance-readers pause, but let me assure you; this is still a technical romance and all the HEA that entails. Because this is Jimenez's modus operandi; to set up female characters who are dealing with impossible odds (often physical and medical) that presents a swerve away from traditional romance tropes (namely; the marriage plot and 'barefoot and pregnant'), only to have it all work out in the end and for tradition to be restored. She did this in first book 'The Friend Zone' and a protagonist with endometriosis who cannot have kids, falling for a guy who comes from a big family and all he wants is children.And this is my frustration, ultimately. Yes I still want a HEA - I don't particularly want to read romance novels with depressing, no-hope endings (that's not romance) but what frustrates me is that Jimenez does such a good job for 80% of a novel, of setting up alternate-romances full of compromises and tenderness, where the male protagonists in particular have to adapt their idea of partner and family because the women they love are not the "perfect" archetype. Like ... I could totally get behind a HEA that includes a woman dealing with the very real hardships that come with infertility because of endometriosis, and her and a partner having to adapt their ideas of family. But no. Jimenez is more likely to just fix everything with a miracle, against-the-odds pregnancy that totally negates all the hard work she put into getting these characters together and working to form a relationship.She does the same here, in 'Life's Too Short'. I learnt so much about ALS and the realities of living with a genetic roulette like Vanessa is. This is the perfect set-up for a big concept of 'Happy For Now' between Vanessa and Adrian, but no ... not to give anything away, but there is a large degree to which everything is magicked away by the end. Or not - it's probably a lot more open-ended than 'The Friend Zone' and I guess it depends on if you're an optimist or pessimist determines how much of a HEA time-limit they get.But, this is a frustration for me. Jimenez's books could be so progressive and adaptive in the romance genre, presenting a different way for female protagonists to be happy, and inverting traditional nuclear-family tropes largely by having male protagonists compromise and adapt for the women they love and the life they want to build with them. But she doesn't. Not really. It's always a cop-out at the end. Even more so in 'Life's Too Short' because Adrian and Vanessa's time coupled on the page is so short and fleeting, it really feels like the last half of the book fumbled their coupling and didn't quite pay-off for the slow-burn build up.Overall, this series has been ~fine~. But it could have been great, and therein lies the rub for me. Jimenez always seems to pull her punches.I think if you want a romance author who commits to subverting romance tropes and presenting different ways for characters in romance novels to ~be~, then maybe try Talia Hibbert?