'The Woman They Could Not Silence: Elizabeth Packard’s incredible fight for freedom, and the men who tried to make her disappear,’ by Kate Moore 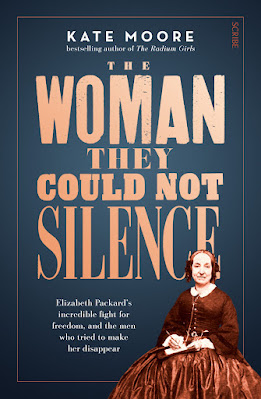 From the internationally bestselling author of The Radium Girls comes a dark but ultimately uplifting tale of a woman whose incredible journey still resonates today.

Elizabeth Packard was an ordinary Victorian housewife and mother of six. That was, until the first Woman’s Rights Convention was held in 1848, inspiring Elizabeth and many other women to dream of greater freedoms. She began voicing her opinions on politics and religion — opinions that her husband did not share. Incensed and deeply threatened by her growing independence, he had her declared 'slightly insane' and committed to an asylum.

Inside the Illinois State Hospital, Elizabeth found many other perfectly lucid women who, like her, had been betrayed by their husbands and incarcerated for daring to have a voice. But just because you are sane, doesn’t mean that you can escape a madhouse …

Fighting the stigma of her gender and her supposed madness, Elizabeth embarked on a ceaseless quest for justice. It not only challenged the medical science of the day and saved untold others from suffering her fate, it ultimately led to a giant leap forward in human rights the world over.

'The Woman They Could Not Silence: Elizabeth Packard’s incredible fight for freedom, and the men who tried to make her disappear,’ is the latest book from London-based author Kate Moore, and her second non-fiction book after the bestselling and award-winning ‘The Radium Girls.’

Is it strange to read a book about 19th-century gender-based injustices and think of Britney Spears crossed with anti-lockdown rhetoric? Well. I can’t help it. From the author’s note the line is clear from the first; ‘This is not a book about mental health, but about how it can be used as a weapon.’ And indeed when the plight of Britney Spears’ has thrown a harsh light on the problem of conservatorships and sparked wider examination of them as a Disability Rights issue too. One of the most eloquently-put arguments against them that I read, came from the Ronan Farrow and Jia Tolentino New Yorker article; ‘“Our mistakes make us who we are, and teach us who we can be,” Martinis said. “Without bad choices, we can’t be wholly human. And with the best of intentions, we say to people with disabilities: we’ll keep you from ever making a mistake.”’

An overlapping venn-diagram has been the anti-lockdown rhetoric aimed at the most locked-down city in the world, mine – Melbourne. ‘Shadow Pandemic Vic’ put forth the ‘damaging to mental health and rise in suicide rates,’ argument for ending lockdowns sprinkled, with a “but what about the children?!” Helen Lovejoy proclamation. Never mind that many on the Internet were able to make very clear and compelling links between the ‘Shadow Pandemic’ “founders” the Liberal Party, suggesting political astro-turfing. While also showing that annual suicide data did not support the claims either. While many more pointed out that the risk of catching and spreading Covid-19 provided a much harder reality of hurt for young children especially; ‘Hidden Pandemic’: 1 Million Children Worldwide Lost A Parent To Covid, Study Finds.

It’s fascinating then, to come to Kate Moore’s latest book that begins in 1860 Illinois and find so many tendrils and talking-points to the here and now. But this initial comparison of weaponizing mental health, wasn’t the only one I made while reading … indeed; the book is an eerie shout into the post with echoes in the here and now, an important and spine-tingling book for the parallels that still exist.

It’s the story of Elizabeth Packard, married to a preacher and content in a life and marriage that centred around home and church … until the woman's rights movement and crusade for the right to vote sweeps through America and takes hold of Elizabeth’s passions. Suddenly she and her husband Theophilius are having theological and philosophical arguments until eventually he decides to have his wife committed to an asylum, on grounds of insanity.

What comes next is the harrowing detailing of her three-year incarceration, and a wider journey into the history of women being dismissed and abused on grounds of their own insanity. This is especially fascinating because I thought I knew so much of this via the story of pioneering journalist Nellie Bly, who checked herself into an asylum in 1887 and went on to detail the brutalising treatment and unethical practices that led to reforms of such institutions, via her journalism. But, as Moore explores, Elizabeth Packard upon release would go on to write her own books chronicling her experiences and beginning to shine a light on the practices and abuses that the likes of Bly would eventually turn their own investigations to.

This is by no means an easy book to read. But I enjoyed it so thoroughly, because I simply adore Kate Moore’s writing. I think it’s a known-fact at this point that ‘The Radium Girls’ remains one of my all-time favourite books and reading experiences I’ve ever had. I also now own it in paperback, hardback and young reader’s edition … and while ‘'The Woman They Could Not Silence’ doesn’t quite eclipse my adoration for ‘Radium Girls,’ it comes damn close in giving me a similar fire-in-my-belly reading experience and a real urge to get up on a pulpit and hand Kate Moore’s books out to all who’ll hear me preach her brilliance.