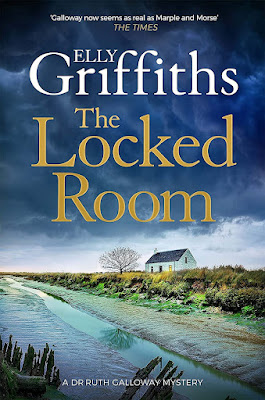 Ruth Galloway and DCI Nelson are on the hunt for a murderer when Covid rears its ugly head. But can they find the killer despite lockdown?

Ruth is in London clearing out her mother's belongings when she makes a surprising discovery: a photograph of her Norfolk cottage taken before Ruth lived there. Her mother always hated the cottage, so why does she have a picture of the place? The only clue is written on the back of the photo: Dawn, 1963.

Ruth returns to Norfolk determined to solve the mystery, but then Covid rears its ugly head. Ruth and her daughter are locked down in their cottage, attempting to continue with work and home-schooling. Happily, the house next door is rented by a nice woman called Zoe, who they become friendly with while standing on their doorsteps clapping for carers.

Nelson, meanwhile, is investigating a series of deaths of women that may or may not be suicide. When he links the deaths to an archaeological discovery, he breaks curfew to visit the cottage where he finds Ruth chatting to her neighbour whom he remembers as a carer who was once tried for murdering her employer.

Oh my gosh, I was so looking forward to this book and it did not disappoint!First of all - and because I finished Book #13 in April 2021, after bingeing the whole series - I've got to say that I think Elly Griffiths made a BANG ON right decision, setting this in 2020 and during the UK pandemic (first) lockdown. I guess she knew she would - because the 'Ruth Galloway' series is generally very sequential with books coming within a few weeks or months of each other (every so often a book will leap ahead by a couple years, but that's generally been to get child-characters out of diapers and more active in the story, is my reading of it!). And in 'The Night Hawks' Griffiths did very cleverly end that book with Ruth's university mentioning a newfangled teaching tool called Zoom ... but I do credit Griffiths with leaning into the pandemic of it all and staying true to how these characters have been evolving in real-time (there's previously been mention of Brexit, so it is very much within the bounds of reason that we'd see how the pandemic affected higher-education, policing, crime, etc.) For me, personally, I wasn't put off or unable to read this book because of the pandemic. Honestly, it was interesting to read the slow unravel of how things happened in the UK ...'The Locked Room' is still a frustrating book in other ways, for fans of the Ruth and DCI Harry Nelson pairing. Of course it is. That's a theme of this series in which the characters live in a literal liminal space between water and land in Norfolk - and have been making decisions that see them similarly trapped between rocks and hard places. For Ruth it's falling for a married man and having a baby with him, knowing he'll never entirely choose or be there for them. For Harry it's finding himself with two families he loves (in different ways) and knowing that any decision he makes will hurt one of them.Well it's more of that ... even as this 14th book sees Harry's wife Michelle locked-down in Blackpool for the duration of the novel, so Ruth and Harry are coming back together in their affair - even, for the first time since holiday-set 10th book 'The Dark Angel' where they get to be together day-on-day and glimpse another world in which they live together as a whole family, with Kate.The illusion however, is quickly shattered by Harry's daughter Laura coming home for lockdown and a perplexing run of suicides that might have more sinister underpinnings. Not to mention talk of uncovered 'plague pits' in Norfolk, and a 'Grey Lady' haunting the town square.I found this to be a very satisfying murder-mystery, even if the personal aspects of the character and their evolution dragged feet again. ALTHOUGH - I will say - I think this book will end up being a little reprieve for big waves coming (I say this every book, and then nothing much overly changes between Ruth and Harry but I am forever hopeful).My prediction is that Michelle will have come home with an ultimatum for Harry - either she's started seeing someone (unlikely, since Griffiths did and wrapped that with the Tim storyline) more likely I think Michelle will be insisting that Harry retire and/or they move away from Norfolk. A couple times Harry alluded to Superintendent Jo wanting him to retire, and that Judy - his second in charge - really should be a DCI, but to do that Harry would need to step aside and retire or leave. Ruth previously moved away to Cambridge with her American lover Frank, so now it feels like Harry's turn ... also that Ruth's worst nightmare should come to pass (Harry not choosing her and Kate) and maybe Harry should get a taste of what actually making a decision feels like (the kicker being; he'll miss Ruth more than he wants to keep calm-waters with Michelle). If that's all the case then I'll be really emotionally wrought and excited.Overall; another fab instalment and I once again can't believe I've got to wait until Feb 2023 for more! GAAAAH!The pandemic worked especially well - allusions to the struggles of international uni students, lack of PPE gear, Ruth disbelieving that she's going through a once-in-a-lifetime event with a leader called Boris, domestic violence prevalence in lockdown, murmurings of Oxford university searching for a vaccine ... it's all still so close to the surface and used to great effect here by the masterful Griffiths, to keep readers and these characters grounded in the here and now - even as we still grasp at the more liminal love story that's forever just out of reach.