'This Side Of Murder' Verity Kent #1 by Anna Lee Huber 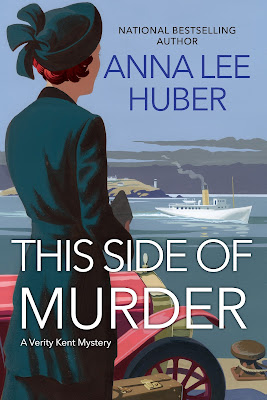 The Great War is over, but in this captivating new series from award-winning author Anna Lee Huber, one young widow discovers the real intrigue has only just begun . . .

England, 1919. Verity Kent’s grief over the loss of her husband pierces anew when she receives a cryptic letter, suggesting her beloved Sidney may have committed treason before his untimely death. Determined to dull her pain with revelry, Verity’s first impulse is to dismiss the derogatory claim. But the mystery sender knows too much—including the fact that during the war, Verity worked for the Secret Service, something not even Sidney knew.

Lured to Umbersea Island to attend the engagement party of one of Sidney’s fellow officers, Verity mingles among the men her husband once fought beside, and discovers dark secrets—along with a murder clearly meant to conceal them. Relying on little more than a coded letter, the help of a dashing stranger, and her own sharp instincts, Verity is forced down a path she never imagined—and comes face to face with the shattering possibility that her husband may not have been the man she thought he was. It’s a truth that could set her free—or draw her ever deeper into his deception . . .

'This Side of Murder' is the first book in American author Anna Lee Huber's 'Verity Kent' series, which currently stands at five books, with a sixth due out this year.

The series kicks off in England 1919 - the end of the Great War and following war-widow Verity, whose rich husband has left her an enormous fortune she cares not two wits about, since losing him in the Battle of the Somme some 15-months ago. Verity has been drowning her sorrows in hard-drinking, occasional flirtations, and brushes with opium and cocaine (though she doesn't like the way those made her feel). 'This Side of Murder' has us meeting Verity on her way to a house-party on the remote Umbersea Island where an assortment of her late husband - Sidney's - surviving regiment are congregating for a weekend away. Some of them have spouses and partners, and they've seemingly invited Verity along out of respect for Sidney's memory and to let her know she still has friends amongst his old Battalion. The renovated manor house on Umbersea is owned by one of these old servicemen and friend's of Sidney, and Verity is intrigued enough by this random assortment of people congregating in one place post-war to go along.

Ah, but Verity has ulterior motives for attending - she's also received cryptic messages from a stranger, alluding to Sidney's part in espionage that may have been the reason he was killed in battle at the Somme. Not the over-the-trenches tragedy and enemy-fire she always assumed.

This turns the island party into a fantastic potential murder-mystery, that gets even better when wild weather traps the party on the Island ... it becomes a real Agatha Chrisite-esque mystery, tied to its location and the various players involved. Verity has to go gently picking amongst the guests to both establish their connections to each other during the war and post, what they felt about Sidney, and what could also have lured them to this party.

This was exactly the kind of book I'd been craving; a quaint murder-mystery just the right side of cozy, but not too twee. Indeed; nothing gets too grotesque or morbid, but there are hard-hitting discussions had about shell-chock, PTSD, grief, suicidal ideation and so much more. It's a thoroughly fascinating time-period for such a mystery series to unfold; post-war, and with Verity having tentative tendrils to the upper-echelons of a struggling British aristocracy.

I will say; the twist halfway through took me by (delighted) surprise. And it ensured I'd be coming back for more in this fantastic series ...