'So Far, So Good: On connection, loss, laughter and the Torres Strait' by Aaron Fa'Aoso, with Michelle Scott Tucker 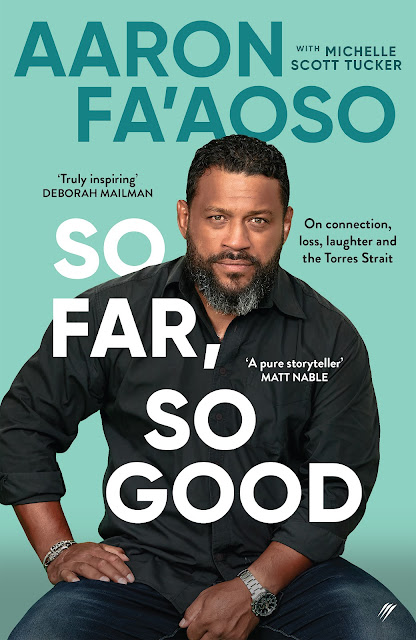 ‘I am a descendant of the Samu and Koedal clans of Sabai Island. My people are warriors, but we are storytellers too.’

On his long path to success – from aspiring professional footballer to actor, director and producer – for every opportunity Aaron Fa’Aoso had, there were setbacks and heartache.

He was six when his father and grandfather both died. His fiercely proud mother and even fiercer grandmother dug deep to raise Aaron and his brothers. Belief in himself as a warrior – literally and metaphorically – made him into a fighter, for better and for worse.

A month into Aaron’s second marriage, and just as his acting career was flourishing, his new wife took her own life. In the dark years that followed, Aaron eventually found strength and meaning in his family and in his beloved Torres Strait community.

In So Far, So Good, he talks frankly about love, pain, making mistakes and finding happiness again, as well as the impacts of racism and the challenges of remote communities. A rich and vivid reflection on life told with generosity, humour, emotion and optimism.

Let me tell you; I am so proud of this book. In a career of highlights (which tends to happen when you get to work with books!) — seeing this memoir out in the world is a stand-out for me.
So Far, So Good: On connection, loss, laughter and the Torres Strait by Aaron Fa'Aoso, with Michelle Scott Tucker.
Jacinta (di Mase) and I met Aaron many moons ago, we sat before him and basically said - we want your story. It took a while, but eventually he came around and once glorious Michelle Scott Tucker signed up to do the telling, the project ignited. 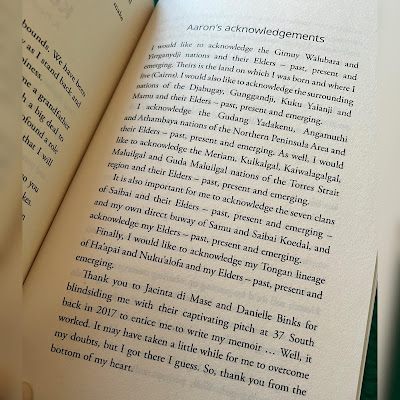 It’s the first memoir by a Torres Strait Islander to be released by a commercial publisher, in Pantera Press. They have also generously donated to Seed Indigenous Youth Climate Network and the Indigenous Literacy Foundation via their Pantera Press Foundation, in the book’s honour.
So Far, So Good absolutely undid me. It’s such a generous story - and in fact, Michelle Scott Tucker on her blog recently wrote about Aaron’s internal fight to reach inside himself for this story and his truth. I love this memory Michelle shares, when speaking with Aaron as he really decided and committed to unearthing his life for the page; “One thing I’ve learnt,” Aaron continued, “is that if you tell the truth, it remains in your past. Tell a lie, and it’s always going to haunt your future. And I have enough ghosts in my life already.”
That’s all here. His grief at a young age, losing his father and grandfather and being raised by the women in his life. The ways early pathways and cultures tried to shape him - like the football career he took initially, and then the media once he decided to become an actor - only to be cast as a villain, a bikie, a thug and criminal, constantly … until he decided to change things himself, write his own screenplays. The way grief followed him. His commitments now to telling the history of his family and the Strait, and that they are on the frontline of climate catastrophe.
For teachers & librarians, I'd also say this is a very good text for older teens. For a history of the Torres Strait. A look at the frontlines of climate catastrophe. And for someone of Aaron’s stature to have a really honest talk with young men in particular, about the paths they choose.
That's all in the book. And, I cannot even begin to tell you how much more is here, and what reading it will do to you - open in you. You have to read it for yourself. It’s a beautiful and bruising story, a groundbreaking one too.
It's out now. And the audiobook (which Aaron narrates) will be out on October 1.
Audible: https://adbl.co/3pvU9Vg
Apple Books: https://apple.co/3ps1NQH
Google Play: https://bit.ly/3SYXREp
Kobo: https://bit.ly/3T1GDGI
My heart is exceptionally full of this book, and I hope it will fill you up too.
Posted by Danielle at 7:41 PM