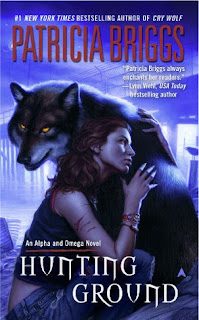 ‘Hunting Ground’ is the second book in Patricia Briggs’s spin-off Mercy ‘Alpa & Omega’ series. The series is centred on Charles Cornick, and his wife/mate Anna Latham. Charles is the son of the Marrok, Bran, who rules all of the American wolves. Charles was born a werewolf to a Native American witch who died during his childbirth – as a result Charles is a somewhat mystical werewolf, able to transform from wolf to human and retain articles of clothing, be somewhat immune to magic and occasionally see fae people.

Anna was originally apart of the Chicago pack after one of its members savagely attacked and turned her. She is an Omega wolf, a very rare ‘zen’ wolf that insights calm and happiness to the wolves in its pack. For three years Anna was abused, sexually, physically and mentally by the Alpha’s in her Chicago pack, until Charles rode in and rescued her.

Anna is trying to overcome her poor self-confidence – first, in the fact that she thinks Charles, an educated and wealthy Alpha male has married her, an undereducated fledgling ‘puppy’. Anna is also trying to overcome past torments she experienced at the hands of her brutal Chicago pack – sometimes those old wounds have her hesitating over intimacy with Charles.

If I have any complaints, it's probably the lack of Bran. He appears, briefly, on two occasions in the novel. I understand that this book is all about Anna and Charles and their evolving mateship, but I love Bran and I missed him (I'm also really looking forward to Briggs detailing Bran & Leah's tumultuous relationship, fingers crossed that is explored in book 3!).