'Some Girls Bite' by Chloe NEILL 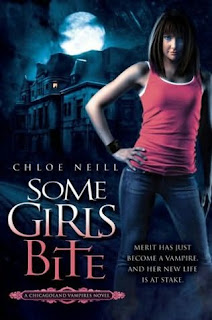 “this is the first supernatural outing in modern history, and it happened in the post-Harry Potter era. In the post-Lord of the Rings era. Humans are a little more comfortable thinking about supernatural beings, supernatural happenings, than they were in the days when witches and vampires burned.”

In some novels the explaining of why supernatural’s are so easily accepted by humans after years of demonizing is long-winded and never really satisfying. Chloe Neill has summed it up beautifully in one paragraph that had me totally willing to believe all of the ‘vampires in modern day’ plot that followed.

Added to Mallory’s intrigue is her instant attraction to the Sorcerer, Catcher. When we first meet him Mallory comments on his stand-offish persona and hidden agenda – yet Mallory seems to pretty quickly break down his walls and the two of them are firmly in love by books end. For me, that relationship alone would have merited a book in itself.

“…Just being in the same room, you two melt the drapes.”

I, personally, did not read any such drape-melting.

Neill did what so many paranormal romance and urban fantasy writers tend to do – the protagonist and his/her lead having an intangible ‘something’ connection that can’t really be explained but is there regardless so even if the spark isn’t really coming across for the reader, the writer can just fall back on the pretext that these two are ‘fated’. And Neill does just that… Merit and Ethan stare across a crowded room and Merit unsuccessfully explains feeling a little ‘something’ click inside of her. I didn’t buy it, and it didn’t help that Ethan, like Merit, was just a big blob of bland for me. He seemed like a watered-down version of Charlaine Harris’s Eric Northman. Merit comments quite a bit on Ethan’s politicizing and the fact that he will happily sacrifice her for the greater good, regardless of his feelings. There was nothing that stood out about him for me, and the lack of chemistry between him and Merit made for a lackluster pairing.

It all came just a bit too easy for Merit for me to like her. Add the fact that secondary characters were upstaging her personality, meant I wasn’t in the least bit invested in her story.