'An Echo in the Bone' by Diana GABALDON 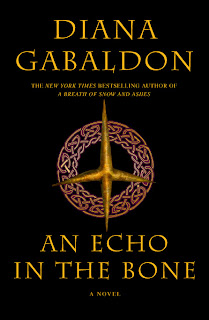 Book #7 in Diana Gabaldon’s ‘Outlander’ series starts where ‘A breath of snow and ashes’ left off. The big house on Fraser’s Ridge having burnt down, Jamie and Claire are preparing to set sail for Scotland to retrieve Jamie’s printing press from Edinburgh and present young Ian to his mother at Lallybroch. Jamie and Ian are also keeping a weary eye open for Arch Bug, who is still lurking around the Ridge with his wife, Murdina, in search of the Cameron gold…

New narration is lent by young Ian – whose story until ‘Echo’ has been shrouded in mystery, only briefly revealed in an exchange with Brianna from ‘A death of snow and ashes’ when he lamented his time with the Indian tribe and his ex-wife, Emily.

Also new to the stories narration is William, Lord Ellesmere. William is Jamie’s illegitimate son, whose mother was Geneva Dunsany. Jamie was a stable hand on William’s estate when William was just a boy, and the two encountered one another on Fraser’s Ridge when William was a lad years later. But otherwise, William has no recollection of Jamie and thinks John Grey is his only father.

Gabaldon’s masterful writing lends credence to this sense that something is just around the corner. The war, for certain, but this sense of foreshadowing and preparation for something big comes in the separate narrations as well.