'Cracked up to be' by Courtney SUMMERS 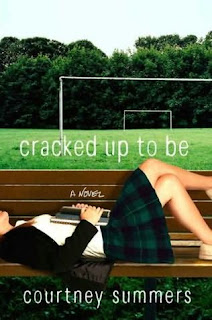 Perfect Parker Fadley isn't so perfect anymore. She's quit the cheerleading squad, she's dumped her perfect boyfriend, and she's failing school. Her parents are on a constant suicide watch and her counselors think she's playing games.but what they don't know, the real reason for this whole mess, isn't something she can say out loud. It isn't even something she can say to herself. A horrible thing has happened and it just might be her fault. If she can just remove herself from everybody--be totally alone--then everything will be okay...The problem is, nobody will let her.


Granted, Parker doesn’t do anything too hellish, and her self-destructive behaviour occurred before the events of the book take place. As readers we are left in the wake of Parker’s failed suicide attempt, when she is determined to at least graduate from high school and leave it all behind.


This is Courtney Summers debut novel and the reason it’s such a good YA book is that it doesn’t talk down to its audience. Parker plays the school guidance counsellor like a violin, and Summers wisely refrains from writing any scenes that have such bandaids work miracles on Parker’s damaged psyche. And she is damaged; readers will deduce this much from Parker’s subtle narrative slip-up’s and character mannerisms. While it may be easy enough for readers to discern Parker’s problems, the brilliance is that Parker herself is forcefully unaware. This makes for fascinating reading as we watch scenes of Parker’s manifesting neurosis and witness characters around her start to pick up on her problems.

Email ThisBlogThis!Share to TwitterShare to FacebookShare to Pinterest
Labels: Courtney Summers, YA