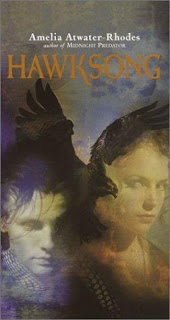 Danica Shardae is heir to the avian throne. A hawk shape shifter, ‘Dani’ has dealt with much tragedy in her 16 years. A war has been raging between the hawks and serpiente – snake shape shifters – for hundreds of years, so long that nobody can even remember the reasons behind the fighting. Dani has lost her father, grandparents, fiancee and recently her younger brother to this horrendous war.

Then one day the serpiente royal family, the Cobriana’s, suggest a temporary peace for negotiations. The ruby-eyed family put a proposition to Danica and her Queen mother – that Danica marry and form an alliance with serpiente heir, Zane Cobriana. Zane is the most fearsome serpiente warrior, it’s rumoured he can capture a soldier with his gaze and penetrate his mind, forcing him to slit his own throat on the battlefield before Zane gets within striking distance. Danica is terrified of the snake prince, but for her people and in the name of peace, she is willing to make the ultimate sacrifice.

This is the first book in Young Adult series ‘Kiesha'ra’ by Amelia Atwater-Rhodes (published in 2003). I really loved the plot of ‘Hawksong’ – it’s a little bit of Romeo & Juliet, Beauty & the Beast and King Arthur. Rhodes has created a fanciful world and mixed in elements of well-known supernatural fables, but made them distinctly her own.

Email ThisBlogThis!Share to TwitterShare to FacebookShare to Pinterest
Labels: Amelia Atwater-Rhodes, Kiesha'ra, YA