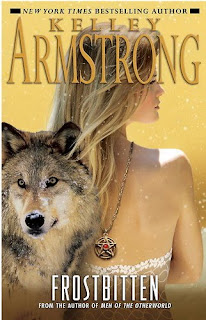 The Alaskan wilderness is a harsh landscape in the best of conditions, but with a pack of rogue werewolves on the loose, it's downright deadly.

Elena Michaels, the Pack's chief enforcer, knows all too well the havoc 'mutts' can wreak. When they hear of a series of gruesome maulings and murders outside Anchorage, she and her husband, Clay, journey to Alaska in the dead of winter in order to hunt down the dangerous werewolves. Trapped in this savage, untamed winter realm, she and Clay learn more about their own werewolf heritage than they bargained for, tapping a little more into the wild nature of the beast within.

I love Kelley Armstrong. She is one of my all-time favourite Urban Fantasy authors and her ‘Women of the Otherworld’ series is one of the very best in the genre. ‘Frostbitten’ is the 10th novel in the series and is narrated by fan-favourite, Elena Michaels. I admit, as much as I love the other series characters and their respective narratives, Elena’s story remains my personal favourite – and I think ‘Frostbitten’ has become my favourite book in the series.

Armstrong has seamlessly intertwined past, present and future in ‘Frostbitten’.

Fans will appreciate Armstrong’s reflection on past events in Elena’s life, especially fans that read the free PDF short-story ‘Beginnings’. There was a more in-depth explanation of Elena’s childhood than what was explained in the first series novel ‘Bitten’. In ‘Beginnings’ it was explained that Elena was abandoned at the age of 5 and put through foster care – and for as many hopeful mothers who saw Elena’s blonde hair and big blue eyes and had hopes of the perfect child, there were just as many ‘fathers’ who had a more predatory reason for wanting to welcome a little girl into their home. In ‘Frostbitten’ Elena receives a letter from one of those foster men from her past, a man who is in rehabilitation and begging forgiveness from his victims. This puts Elena in a strange frame of mind as she sets out to track down rapist mutts. As much as the letter unearths ghosts from Elena’s past, it’s also an opportunity for Elena to expunge those demons… and in ‘Frostbitten’ Armstrong articulates an incredibly powerful message to survivors of sexual abuse that is entirely heart wrenching and awe-inspiring.

Fans will also appreciate Elena and Clay’s reflections on a subject matter that has been a pink elephant between them in previous books – the fact that Clay bit Elena, infecting her with lycanthropy. There isn’t a long drawn-out discussion (neither character is the type to naval-gaze and talk out such feelings) but there is a sense of foreclosure on a subject fans have been curious to read about for quite some time.

Fans may be dismayed to find that ‘Frostbitten’ is set in Alaska, with Clay & Elena away from Stonehaven and their twins Logan & Kate. Fans who were hoping to read snatches of werewolf domesticity have no need to panic, Armstrong has artfully bypassed this disappointment by including a few phone-calls home that provide a wonderful glimpse into Elena & Clay’s family life. Armstrong, clever writer she is, has managed to imbue Logan & Kate with vivacious and distinct personalities, and fans will no doubt be looking forward to their appearance in future books. Through these glimpses of life back home, Armstrong has also managed to reveal what changes parenthood has had on our favourite werewolf pairing;

And finally, Kelley Armstrong has done an incredible job of whetting our appetites for Elena’s next narrated book, by offering teasing future plots. In ‘Frostbitten’ Jeremy has recently revealed to Elena & Clay that he intends for Elena to take over his role as Alpha. Clay is perfectly happy with the promotion, admitting that he’s better as muscle than as a leader. It’s Elena who is hesitating over accepting the position – concerned by how her Alpha status will affect her and Clay’s relationship, and what problems it will cause trying to convince mutts that ‘female’ isn’t synonymous with ‘weak’. This is a truly fascinating element to Frostbitten’s plot, and a wonderful starting point for the next Elena book.

Armstrong also introduces three new intriguing characters in ‘Frostbitten’, all of whom I hope to see in future books, possibly in lead roles? With these three new characters the possibilities are endless, as they are each intriguing in their own way, with mysterious back-stories. Armstrong has definitely pricked my interest with these plot changes and character additions – and I cannot wait to see how they impact the entire ‘Women of the Otherworld’ series.

And finally, series fans will appreciate the many Clay & Elena interactions ‘Frostbitten’ has to offer. They are one of my favourite urban fantasy couples, and ‘Frostbitten’ reminds me why. Clay & Elena are the ultimate team – they trust one another implicitly, and have come a long way in their relationship since we first met them in ‘Bitten’. This book offers of a wonderful glimpse into the evolution of their mating, and excites the possibilities of where their relationship is heading.

I loved this book. I love this series, and I love Kelley Armstrong. All her series are amazing, ‘Women of the Otherworld’, its spin-off YA ‘Darkest Powers’ and the less popular but equally amazing ‘Nadia Stafford’ are all favourite's of mine. If you haven’t yet read anything by Armstrong, then you are seriously depriving yourself!

*** For those of you who didn’t get a chance to download Kelley Armstrong’s free short stories, she has unfortunately taken them down from her website… but for good reason. She is releasing another Women of the Otherworld anthology, in the same vain as her ‘Men of the Otherworld’ book, called ‘Tales of the Otherworld’ – to be released in April 13, 2010. Proceeds from book sales will be going toward charity!

Email ThisBlogThis!Share to TwitterShare to FacebookShare to Pinterest
Labels: Kelley Armstrong, Women of the Otherworld