'Tempt me at Twilight' by Lisa KLEYPAS 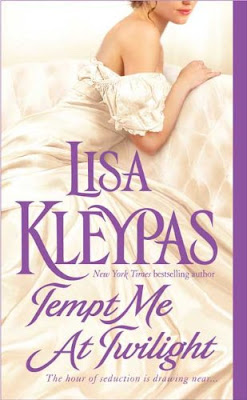 I was a little sorry that Harry wasn’t more of a rake though. In the beginning his character is utterly sinister, but upon marrying Poppy he mellows a little too quickly for my liking. Considering his back-story I think Harry’s actions could have been plausibly more wicked and conniving. Granted, going into a Kleypas book you know what to expect, there’s not a whole lot of edge-of-your-seat suspense when you know from page one that you’re reading toward a happy ending. That being said, in quite a few Kleypas books I’ve had moments of ‘will-they-or-won’t-they?’ tension (‘Sugar Daddy’, for one). ‘Tempt me at Twilight’ has more of a challenge than most romances, because the couple is married fairly quickly and the story centers around whether or not they’ll find love in holy matrimony or total regret? I just think the happy-ending pay-off could have been heightened if Harry hadn’t succumbed to Poppy’s kindness quite so quickly, if he’d kept up his deplorable behavior for a little longer.