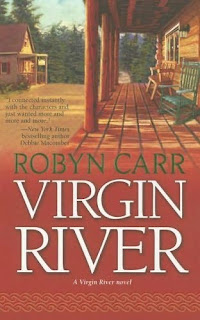 Melinda Monroe is recovering from the death of her husband, Mark. In a fit of grief, and in a bid to escape the pity of friends and family, Mel accepts a job offer to live rent-free in the small mountainside town of Virgin River. A certified nurse and midwife, Mel thinks that country doctoring and a laid-back atmosphere is just what her sore heart needs… but what she finds is a run-down cabin, no reception, treacherous roads, a cantankerous doctor and no Starbucks for miles and miles.

Virgin River, population 600, is not what Mel’s grieving heart needs, and she intends to beat a hasty retreat. But on her way out of town she stops in at the local (and only) pub, owned by ex-marine Jack – who wishes Mel would give his town a second chance, if only to improve the scenery (and give him a chance to get to know the sexy nurse). But it’s not the sexy bar-owner that has Mel backtracking and extending her stay in Virgin River… it’s the abandoned baby left on the doctor’s doorstep.

This book is a little hard to review. It was so-so for me, but I liked the world Robyn Carr established, and having read the blurbs of the other books I actually do look forward to further reading.

I liked the fact that ‘Virgin River’ wasn’t an idyllic little town. True, it was beautiful and Mel gets deer in her front lawn and enjoys the mountain-sights while fly-fishing. But Carr also wrote its gritty side, giving the place a firm base in reality. There’s a town drunk called Cheryl whose only in her 20’s but has been on a steady decline since she was a teenager. There’s also a town leech called Nick who has been ‘slapped down’ by just about every woman in the town, much to the humiliation of his sweet-tempered wife, Jo. On the outskirts of town is a caravan-community of marijuana-growers, for whom the local Doctor and Mel are occasionally called upon to doctor after bawdy fighting.

Mel and Jack didn’t have a whole lot of sizzle; it was more of a slow burn. Granted, Mel was coming into the romance with a lot of baggage, her husband being dead not even a year. But I also liked the fact that Jack wasn’t a choirboy; he has a ‘friend with benefits’ in a town over, and we do get scenes with him and his sometimes-lover, so it’s not as though he does a complete 180 just because Mel walks into his bar. I liked their romance because it was a lot of give-and-take, nothing came simple and even though the slow burn was frustrating, it was completely in character for both of them.

I really liked the way that Robyn Carr dealt with Jack’s being an ex marine, and the fact that he saw a lot of combat (five wars). Jack’s military trauma is briefly touched on, but Carr deals with it in a very realistic and thoughtful way. She uses the same explanation for Jack’s coping methods as she does for Mel’s grieving – it won’t go away, it’s a part of both of them and it’s unrealistic to think that a blooming romance will suddenly act as band-aid for such problems.

One problem I had was the extra narrative by a 16-year-old boy called Ricky, who works in Jack’s bar and who Jack took under his wing years ago. It was just a little bit random, to swing between Jack and Mel’s perspective, and then suddenly read the insights of a 16-year-old boy. Ricky also has a slightly disturbing relationship going with Liz, an overly mature 14-year-old girl who wears shorts skirts and tight tops and is driving her aunt up the wall. I think Ricky might be a recurring narrative in future books, and his story might become a book in itself, but it was still strange to suddenly have his POV.

This was a good read. It’s a contemporary romance – so there is a level of predictability and expectation from the plot and ending, but I was pleasantly surprised overall. It’s not the best contemporary romance I’ve ever read, but I predict the series will get better as it goes on.

I read the blurbs of the other books in the series, and was a little cautious; because the rest of the books also have a marine Alpha-male in the lead. I was heading into ‘Virgin River’ prepared to be totally skeptical and scoffing at a 600-person town that just so happened to have plenty of hot marines on tap. Actually, Robyn Carr sets up the future romances pretty well. Jack is an ex marine from the 192nd battalion, and once a year his old squad come and visit him and indulge in a bit of fly-fishing and deer hunting. They are clearly brothers-in-arms and it’s not too outlandish to think that such a close-knit group would extend their camaraderie to civilian life.

The other books in the series spike my interest more so than this first book. So, because I enjoyed Carr’s writing enough, and the rest of the series sounds promising, I intend to revisit ‘Virgin River’.