'Can't stand the Heat' Recipe for Love #1 by Louisa EDWARDS 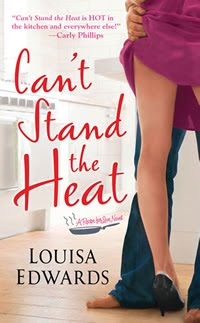 From the BLURB:
For sharp-tongued food critic Miranda Wake, the chance to spend a month in Adam Temple’s kitchen to write an exposé is a journalistic dream come true. Surely Miranda can find a way to cut the hotshot chef down to size once she learns what really goes on at his trendy Manhattan restaurant. But she never expected Adam to find out her most embarrassing secret: she has no idea how to cook.
Adam’s not about to have his reputation burned by a critic who doesn’t even know the difference between poaching and paring. He’ll just have to give the tempting redhead a few private lessons of his own—teaching her what it means to cook with passion…and doing more with his hands than simply preparing sumptuous food.
This is Louisa Edward’s first book, and the debut in her ‘A Recipe for Love’ series.
I really liked this book. I was a bit hesitant at first, because the premise sounded a little too ‘romantic comedy’ sickly-sweet… but I was pleasantly surprised.
Miranda Wake is not a totally-together woman. She may appear to be a suave New York food critic, but underneath her biting reviews and killer red stilettos is a woman trying to kick-start her lukewarm writing career and deal with her baby brother’s emotional withdrawal. I really liked the two sides to her character – the ‘front’ she shows the outside world, and the slow reveal to her deeper emotions and shortcomings that readers, and Adam, begin to uncover.
To be honest, ‘Can’t Stand the Heat’ could have been too cloyingly sweet and a bad rom-com schtick if not for the second storyline. As well as Miranda & Adam’s romance, Edwards writes about Miranda’s 22-year-old brother, Jess, who is coming to terms with his homosexuality and burgeoning feelings for sous chef, Frankie. Jess has thrown in his scholarship and returned to NYC to live with Miranda after a disastrous ‘outing’ to his University friends. He is coming to terms with his sexuality while navigating a flirtation with serial-dater, Frankie, all while trying to keep everything secret from Miranda.
I really loved the Jess/Frankie storyline, probably more than I liked Miranda/Adam. I probably preferred Jess’s story because he made such personal progress and took so many chances in his romance. Plus he and Frankie were super cute and hot.
That being said, Miranda and Adam are just as steamy and delicious. Edwards knows how to write her way around a smutty scene;
Hot damn, the girl had a mouth made for sin. That cupid’s bow shape all puffy and kiss-swollen, rubbed redder than usual from his own mouth. The taste of her was like nothing he’d ever encountered. If he could separate out the flavors and figure a way to re-create it, he’d have the hottest dessert the world had ever seen.
My one complaint is to do with the book’s ending. I was thinking that I’d dodged a bullet and completely avoided reading a cheesy rom-com – but the ending is a little too unbelievable and tacky – very over the top. But that is my one complaint.
I don’t know how many books Louisa Edwards has in store for her ‘A Recipe For Love’ series, but there is lots of potential in a series about the goings on of NYC restaurants. I have never worked in the food industry myself – but plenty of my friends and family have worked as waiters/waitresses, bartenders and bouncers – and I was surprised and delighted at how well Edwards knows the in’s and out’s of the behind-the-scenes of restaurants. Plenty of hook-up’s, break-up’s and cattiness to tide the series over.
I will definitely be reading the second installment ‘On the Steamy Side’, released March 1st this year – and hope that Edwards is contracted for more books.
3.5/5 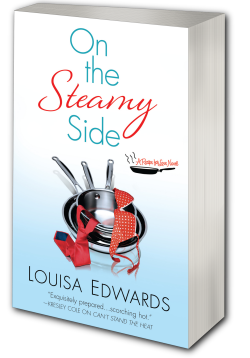