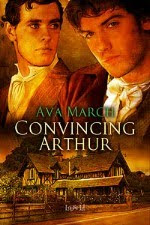 From the BLURB:
Mr. Leopold Thornton missed his chance ten years ago. He isn't about to let this one pass him by.
Given Leopold's reputation for vice and debauchery, Mr. Arthur Barrington has a fair idea why the wickedly handsome man invites him to his country estate. A hunting excursion? Unlikely. Especially considering Arthur is the only guest invited to the estate. He shouldn't even consider the invitation, but a few days of meaningless sex could be just the thing to take his mind off the recent disappointing end of a ten year relationship. Then he can return to London, to his thriving law practice, and quietly search for an amiable man who understands the meaning of the word discreet and who recognizes the value of commitment.
There was a time when Leopold wasn't such a rakehell. When every night didn't end with an empty bottle of whisky. When he believed in the rewards of patience. When he didn't give himself over to just anyone who would have him. Old habits die hard, especially when tempted by six feet of solid muscle, but Leopold will only have a few days to convince Arthur he can be that man again - that his affection is genuine and he's worthy of Arthur's heart.
‘Convincing Arthur’ marked two ‘firsts’ for me – my first e-book read and my first proper foray into M/M erotica.
This was no tame introduction to the wonderful world of M/M. Oh no. The sex scenes are sizzling and gratuitous (just the way I like them). A very tame tender moment between Arthur and Leopold went something like this:
“Ah…damnation.” Arthur gasped, his eyes closing against the most intense pleasure. By God, the man knew what he was about. Bobbing along the length, sucking hard enough to almost pull the orgasm out of him.
And it only gets better from there.
‘Convincing Arthur’ is a very short read, but March has done such a fantastic job at characterisation and setting that no detail is lost. The story is set in 1820, and while neither character dwells on the current conception of homosexuality as being an ‘abomination’, Arthur makes enough nervous gestures and mentions avoiding the hangman’s noose that you get the idea without lengthy paragraphs. It’s a good bit of concise scene setting.
There also isn’t a whole lot of recounting of Arthur and Leopold’s history with one another – despite the fact that Leopold has been pining for Arthur for 10 years. March communicates Leopold’s yearning through inner dialogue and in his desperate interactions with Arthur. And you do definitely get the feeling that Leopold is helplessly, hopelessly in love with the studious bookworm, Arthur. It’s quite sweet and relatable really. Leopold turned himself into a rake for the 10 years he was pining after Arthur, and then threw himself into the opportunity to show his crush just how much he wants him the minute he becomes single again.
While the sex scenes smoulder, the romance is quite sweet. And there’s a lovely speech from Leopold toward the end, announcing his feelings that had me going “awwww”.
I do think that the story could have been longer. It was all over too quickly for my liking. But ‘Convincing Arthur’ was definitely the right way to be introduced to the wonderfully erotic world of M/M. Now I’m going to buy myself some Josh Lanyon e-books and jump onto J.R. Ward’s online forum to scout out more Blay/Qhuinn goss. I am a total M/M convert!
Thanks to Mandi (smexybooks) for recommending.
5/5
Posted by Danielle at 8:22 AM