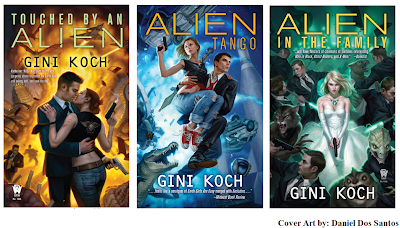 I am a HUGE fan of Gini Koch's 'Katherine "Kitty" Katt' series. I fell in love with 'Touched by an Alien' this year and I am now panting after the next two books in the series. I am counting down the days until 'Alien Tangio' is released on December 7th (64 days, 15 hours and 22 minutes... ) In the meantime I have been tiding myself over by admiring (drooling) over the cover art that Ms. Koch was kind enough to reveal. Designed by the incomparable Daniel Dos Santos these covers are *STUNNING*, like crack for my eyes.

If you haven't already read 'Touched by an Alien' then... WHAT THE *HECK* IS WRONG WITH YOU!? But seriously, if you haven't gotten addicted to this series yet, it's never too late to get obsessed. And if you are familiar with Kitty then join me in lusting after book #2 and #3 (64 days, 15 hours and 15 minutes)... 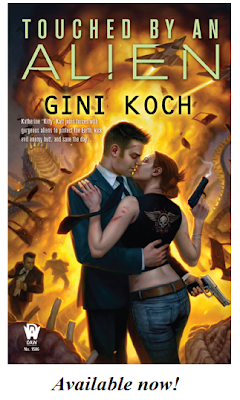 Marketing manager Katherine "Kitty" Katt steps into the middle of what appears to be a domestic dispute turned ugly. And it only gets uglier when the man turns into a winged monster, straight out of a grade-Z horror movie, and goes on a killing spree. Though Kitty should probably run away, she springs into action to take the monster down.

In the middle of the chaos a handsome hunk named Jeff Martini appears, sent by the "agency" to perform crowd control. He's Kitty's kind of guy, no matter what planet he's from. And from now on, for Kitty, things are going to be sexy, dangerous, wild, and out of this world. 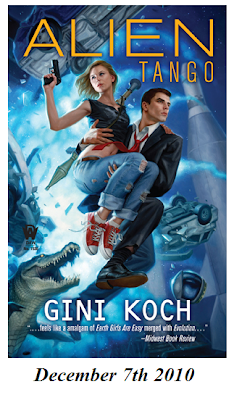 It's been five months since marketing manager Katherine "Kitty" Katt started working with the aliens from Alpha Centauri, and she and Jeff Martini are getting closer. But when an experimental spacecraft is mysteriously returned to the Kennedy Space Center, Kitty and the rest of her team are called in to investigate. Now the team must survive murderous attacks, remove a space entity from a group of astronauts, and avoid an unhinged woman with a serious crush on Kitty's high school boyfriend. And that's all before evil masterminds decide Kitty's extermination is vital. 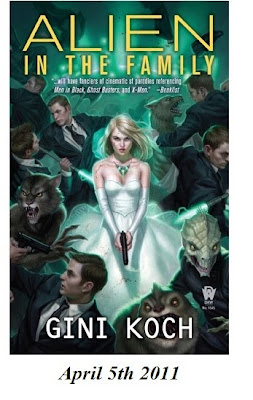