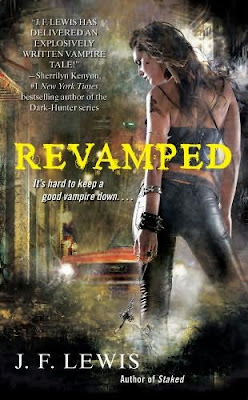 REVIVED. REFRESHED.
AND READY FOR REVENGE.
Eric has lost his strip club, his Mustang, and even Marilyn, the elderly love of his (mortal) life. Even his body was obliterated. In short, they almost got him. But when you're a vampire, "almost" is a very important word. With a little magical help from his friends, Eric is restored to corporeal form, but his treasured Mustang gets caught up in the sorcery and winds up with an unlife of its own. Now, along with "Fang the 'Stang," he's out to save Marilyn from one of Void City's most powerful soul-stealing demons. But salvation comes at a high price, forcing Eric to venture into his own worst nightmare, Vampire High Society, to uncover the truth about the origin of his powers.

At the same time, Eric's ex-girlfriend, Tabitha, has begun to wonder exactly what it was that she admired about those High Society Vampires in the first place. Her quest to find her own place in this deceptively vicious circle may lead her right back to Eric's side -- if her little sister, Rachel, doesn't kill her first. And Eric will need all the help he can get, because it looks like someone is after his soul, too. Blood will flow, fangs will be bared, and the claws will come out, because revenge is never pretty...and Eric has plenty to pass around.

** The following review contains a few minor spoilers for 'Staked' **

The book picks up exactly where ‘Staked’ left off with uber-vampire, Eric, having just exploded along with his strip club, Demon Heart. In the explosion Eric lost his corporeal body, his aging ex girlfriend and realized the depths of his best friend’s hatred (since Roger was the one doing the blowing-up).

Meanwhile across town, Tabitha, Eric’s other ex-girlfriend (recently turned Vlad vampire) has high-tailed it across town to the plush Highland Towers penthouse suite where she intends to throw herself on the mercy of Void City’s politicizing vampire, Phillip.

The action starts right from the word ‘BANG!’ and doesn’t let up for 432 pages.

There’s quite a lot of mechanics for J.F. Lewis (and Eric) to work out in this second novel. A lot of the bigger plot points were established in ‘Staked’ and carried over for greater significance in ‘ReVamped’. Like Tabitha’s little sister, Rachel. In a move that won him ‘grand-daddy poombah jerk of the year’ (awarded by me), Eric shacked up with Tabitha’s 18-year-old kid sister in ‘Staked’. . . not knowing that Rachel died last year of cancer and her coming back has repercussions of demonic proportions. ‘ReVamped’ is all about Eric and his band of supernatural friends figuring out exactly what those repercussions entail. . .

No One is Innocent
I felt a little bit assaulted by first book, ‘Staked’. I was initially thrown by the seemingly traditional Urban Fantasy cover of a gun-wielding hot chick and my expectations for a paranormal romance complete with Alpha-hottie vampire heroes. Not the case with ‘Void City’. Eric is an awful guy (see: having sex with his ex-girlfriend’s little sister) who revels in his monster-side and has no moral qualms whatsoever. In ‘ReVamped’ Eric quite casually states that since becoming a vampire in 1965 he has killed approximately 10,000 people (give or take) and he’s not the least bit sorry.

Going into ‘ReVamped’ I felt a lot more prepared for the onslaught of character atrociousness that peppers the ‘Void City’ series. I know Eric is an anti-hero protagonist who, love him or hate him, is unflinchingly honest and darkly humorous. I understand that Tabitha is a vain and vacuous love interest who will let Eric treat her like a doormat. . . I know not to expect too much, morally, from these characters, and with that in mind I can sit back and enjoy the raucous ride.

(I’m Not Your) Stepping Stone
As much as I know Eric and Tabitha will never be upstanding protagonists with high moral fibre, I couldn’t help but root for their decency a teensy-weensy little bit. For me, the most likely scenario in which Eric and Tabitha might reveal their softer-sides is with regards to their on/off relationship.

In ‘ReVamped’ Tabitha has sworn off of Eric and left him for good (with hopes that he’ll come chasing after her). Meanwhile Eric is realizing that Tabitha is the first turned girlfriend he’s actually maybe, sorta missed since breaking up.

The one big road-block to semi-happiness for these two is Rachel. . . the demonic little sister who stole big sis’s boyfriend and is trying to harness his powers for nefarious purposes.
As a woman I really wanted Tabitha to make a lot more of the Eric/Rachel hook-up because it is just so darn wrong and icky. But two things are working against my hope for Tabitha’s Aretha Franklin moment. . . The first is that she is a vampire now, and her thinking and emotions have become hardened and somewhat dulled. So her indignation just isn’t there like it would be if she was still human. Second is that fact that Tabitha is a human doormat. . . she loves Eric so much and is so fixated on getting him any way she can that she’s willing to forgive a lot. As an empowered female it’s hard to read, but J.F. Lewis somewhat makes up for the emotional shortcomings with a head-ripping scene of epically fantastic proportions. Now that’s girl-power!

Eric is a little better and self-aware in ‘ReVamped’ than he was in ‘Staked’. At least in this second book he acknowledges his possible feelings for Tabitha and admits the foolishness of falling for Rachel. But he’ll never be a romance hero. Not ever! The closest Eric gets to ‘romance’ is ‘territorial’;

“What’s your problem, man?” he said, popping his neck into place. “She’s just a human. What do you care?”
I grabbed him by the throat and cut him off before he got himself dead for real. Why I cared, I can’t tell you. I just did. “The reason you will understand is this: She is mine and I don’t share well. I never have. It’s a childhood malady. Maybe I had too many brothers and sisters and I have a deep need to indisputably demonstrate my ownership of things.”

You Need Hands
One of the best things about ‘ReVamped’ is the introduction of many glorious secondary characters. Sweetheart Row blood prostitutes, an eternal vampire virgin, a vampiric Mustang called Fang and best of all is creepy head-honcho vampire, Phillip.

Phillip lives in the Highland Towers and runs Void City – everything from the politicians to the firemen and police - he has a hand in every pocket. He’s short, balding, fat and a sadomasochist of disturbing proportions. Case and point, Phillip keeps a staked vampire in his lobby – a vampire who is aware, seeing and living, but imprisoned in a glass case with a stake in his heart that keeps him immobile. Engraved on this entombed vampire’s glass case is a psychotic warning from Phillip:

My dear Percy, who serves as a remembrance to all that I do not bluff, I do not make empty threats, and there are indeed worse fates than death.

As creepy as he was, I liked Phillip and look forward to how he plays out in future books.

Lonely Boy
As in ‘Staked’ my favourite thing about ‘ReVamped’ was Eric himself. Yes, he’s an awful person with no goodness about him. But he’s funny. Dark and twisted, his humour knows no bounds and goes where others fear to tread. And then occasionally he’s just plain ‘laugh out loud’ hilariously random;

“. . . I will make you a eunuch, chain you to the wall, and pay the oni to eat you like a tortured animal cracker. Do you understand me?”
He took a deep sniff, smelling me, then nodded. I let him go.
“Okay, now don’t get mad, but can I ask you something?” Talbot panted.
“Sure.”
“A tortured animal cracker?”
I flipped him off. “Feet first, asshole. If you want to torture an animal cracker you eat it feet first. Everybody knows that.”

This series couldn’t work if Eric wasn’t so darn enigmatic and likable in spite of his awfulness. J.F. Lewis has really finessed his character to make him ridiculously likable and hateable all at the same time.

Did You No Wrong
‘Void City’ is one of my favourite new-find series of 2010. Hands-down incredible. J.F. Lewis has mastered this dark Urban Fantasy and left me wanting more, more, more! Now I have to wait until January 2011 for third book ‘Crossed’, but I know it’ll be worth it. 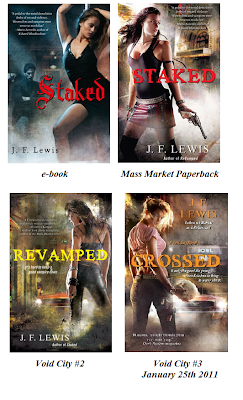