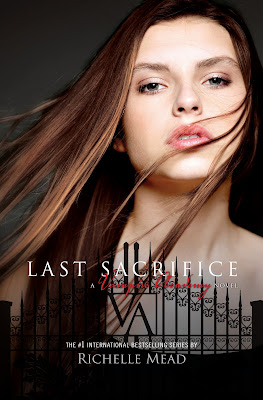 The astonishing final novel in Richelle Mead's epic series!
Murder. Love. Jealousy. And the ultimate sacrifice. Now, with Rose on trial for her life and Lissa first in line for the Royal Throne, nothing will ever be the same between them.

The beginning of the end
It’s here! It’s here! The sixth and final instalment of Richelle Mead’s epic ‘Vampire Academy’ paranormal YA series. . .

I have been waiting, nail-biting and anticipating this final instalment for MONTHS! And now that it’s finally here and I have consumed the book in one sitting my overall response is. . . okay. It was pretty good. I wasn’t overwhelmingly in love with the book, I didn’t hate it, but it won’t make my 2010 favourite’s list.

‘Last Sacrifice’ picks up where ‘Spirit Bound’ left off. Queen Tatiana is dead, staked in her sleep – and all evidence points to Rose Hathaway. Now Rose awaits trial in the court prison, and it is very likely that she will be found guilty and sentenced to death. . . But not if Rose’s friends have anything to say about it.

Dimitri, still recovering from his Strigoi-turn, is determined to break Roza out. Adrian, Christian and Lissa want to wade through political intrigue and find out who really killed Tatiana. . .

And Rose wants to get to the bottom of Tatiana’s cryptic final message. A hand-written note warning Rose that danger lies ahead, and Lissa is not the last of the Dragomir line. . . she has a sibling, an illegitimate child who could change the course of Moroi royal history forever.

Big surprises
This is a MAMMOTH final instalment. Following in the footsteps of Stephanie Meyer’s ‘Breaking Dawn’ and JK Rowling’s ‘Harry Potter and the Deathly Hallows’, ‘Last Sacrifice’ is a whopping 594-page ending extravaganza. That being said, because it’s 594 pages there’s a fair bit of legwork on Richelle Mead’s part; lots of scene setting and plot strategizing to set up all the players and orchestrate this grand finale. The first 200 pages seem quite slow, revolving around Rose’s imprisonment, the political implications of Queen Tatiana’s death and Lissa’s standing in Moroi society. I would warn that the plot doesn’t start to satisfyingly thicken until about chapter fifteen (page 236).

‘Last Sacrifice’ follows a similar structure to book #5 ‘Spirit Bound’, in that the book is often split between Rose’s ‘real-time’ perspective, and her shadow-kissed bond with Lissa. The bond with Lissa allows Rose to pull a ‘Being John Malkovich’ perspective-swap, and let her see through Lissa’s eyes. I’m not a big fan of this tactic; Mead used it quite heavily in ‘Spirit Bound’, when Rose was in Siberia and Lissa remained in St. Vladimir’s. I think the reason this point of view structure doesn’t sit well with me is because it means Rose and Lissa aren’t actually in scenes together. I know the storyline calls for them to be apart, but I've always struggled with Rose and Lissa’s bond (mostly because I can never get past the idea that Rose is slave to Lissa’s princess) so not actually having them in scenes together means I am missing out on evidence of their devotion to one another. I know that’s quite an outlandish response to have, and few VA fans share it, but it’s just the way I feel. I've never much liked Lissa, purely because I think she puts Rose in a position of servitude (even if Rose wants to be there).
Stake, Treason and Plot
The good news however, is that both plots are equally fascinating.

The political storyline is wildly absorbing – not least of all because Rose is the accused murderer at the centre of it all. This plot sees Lissa, Christian and Adrian unearthing court secrets and political intrigues – sex, violence and royal assassinations are at the heart of their investigations. And the court politics runs nicely alongside Rose’s hunt for the elusive lost Dragomir, with help from Dimitri and her Alchemist friend, Sydney. Rose’s adventure in this book isn’t as grand as past instalments – she travels to West Virginia instead of Russia, for example. But the stakes are higher than ever when the hunt for the missing Dragomir could potentially change the course of Moroi history. Even if I have never responded to Rose and Lissa’s powerful ‘friendship’, I appreciated the fact that they are both working for the other in this book – Lissa is trying to clear Rose’s name, while Rose is hunting for Lissa’s lost sibling. It’s a nice compliment and balancing act that Mead juggles throughout. . .

I think I love you. . .
But let’s not beat around the bush or walk on eggshells – what fans really want, what made the 12 month wait so excruciating and the prospect of this finale so delicious was the romance. Will Rose choose Adrian, or Dimitri?

Once upon a time, Rose’s choice would have been simple. Dimitri was her teacher, mentor, lover and firmly set upon a god-like pedestal. Adrian was once nothing more than a drunken flirtation – a boozed royal amusing himself with Rose’s affections. Then Dmitri became Strogoi and everything changed. . . Adrian became a true friend and shoulder to cry on, and then so much more. Rose’s romantic entanglements got flipped around and turned inside out, and fans are desperate to know who Rose ends up with. Well, I will say that Rose makes a choice; Mead doesn’t take the option away from her.

In ‘Last Sacrifice’, Dimitri is still reeling from his Strigoi turning – and still standing by his ‘Spirit Bound’ decision to stay away from Rose. Adrian, mean while, is as devoted to his little dhampir as ever. It’s a tough choice for Rose, and a romantic triangle that Mead didn’t write lightly. I loved that she built Adrian’s character up from his first appearance in ‘Frostbite’, making him a real contender for Rose’s affections. Adrian was once a drunken flirt, but over the course of five books he has made some real changes and become an admirable character and fan-favourite.

Dimitri and Rose still have all the spark that’s been there since book one, but Mead piles on the romantic obstacles for these two. . .

The rage on Dimitri’s face completely gave way to desperation. . . and then that gave way to despair.
I tugged gently on his arm. “It’s over. You’ve done enough.”
“It’s never enough, Roza,” he whispered. The grief in his voice killed me. “It’ll never be enough.”
“It is for now,” I said. I pulled him to me. Unresisting, he let go of his stake and buried his face against my shoulder. I dropped my stake as well and embraced him, drawing him closer. He wrapped his arms around me in return, seeking the contact of another living being, the contact I’d long known he needed.

The romance has been a big selling point of the Vampire Academy series. Rose and Dimitri’s clandestine student/teacher affair was a risky and somewhat revolutionary coupling in the young adult genre (and hardly mainstream). But more than that, Mead’s doses of romantic tragedy kept fans reeling and devastated. Richelle Mead clearly does not shy away from heartbreak or moral conundrums (as evidence when she sent Rose off to kill the man she loved). ‘Vampire Academy’ marks the first of Mead’s series’ finales (with ‘Georgina Kincaid’ and ‘Dark Swan’ still continuing). Fans will be going into ‘Last Sacrifice’ not knowing what to expect from Mead’s wrap-up style – does she like happy-endings, or will she leave the series on a sombre note???. . .

Last Goodbye
And on that note, I will say that the ending was so-so for me. The foreword from Richelle Mead (which may only appear in international copies of ‘LS’, to clear-up a name-change error) deflated what could have been a dramatic ending. . . I can’t go into too much detail, but if you read the foreword from Ms Mead you will see that she makes mention of the much-anticipated VA spin-off series. Because of this small mention, the ending of ‘Last Sacrifice’ is more of a whimper than a bang, purely because that foreword gave away what could have been a curveball ending for some (like those who haven’t been reading spoilers about the spin-off).

I was also a little disappointed by the romantic wrap-up. I expected. . . more. The romance’s conclusion ended up being a little more ‘teen melodrama’ than anything else, and instead of a dramatic scene we get a lot of inner monologues and heart-to-heart’s. Which is fine, but for the finale a bit ho-hum when not coupled with memorable action. Unlike past VA books, there really wasn't a single memorable romantic moment that stuck with me.

So long, but not farewell. . .
The good news is the spin-off series cast of characters become apparent by the end of ‘Last Sacrifice’. . . and I dare say a few fan favourite’s will be coming back for more! And it looks as though the ‘Vampire Academy’ title will be relevant once again, as the spin-off will most likely take place back at Vladimir’s Academy – YAY!

The ‘Vampire Academy’ series has been a hallmark of the young adult paranormal genre. It has been an epic series of love, hate, violence and kick-ass girl heroics. This series is a work of unparalleled teen brilliance and Richelle Mead has cemented her place amongst not only the teen heavyweights, but paranormal-writers. If you haven’t read this series yet, then you’re doing yourself a disservice. Even if I wasn’t thrilled with the finale, I can appreciate the series as a whole and will forever count it amongst my all-time favourites. 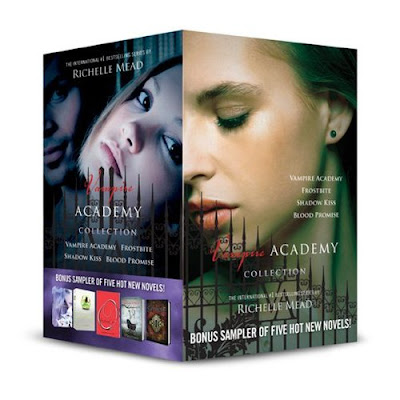