'Just One Taste' Recipe for Love #3 by Louisa EDWARDS 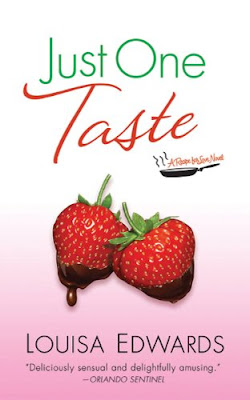 From the BLURB:
Bad-boy chef Wes Murphy is dreading his final-semester cooking class—Food Chemistry 101—until he meets the new substitute teacher. Dr. Rosemary Wilkins is a feast for the eyes, though her approach to food is strictly academic. So Wes decides to rattle her Bunsen burner by asking for her hands-on advice—on aphrodisiacs…
Rosemary is a little wary about working with Wes, whose casual flirtations make her hot under the collar. But once they begin testing the love-enhancing power of chocolate, oysters, and strawberries, it becomes scientifically evident that the brainy science nerd and the boyish chef have some major chemistry together—and it’s delicious…
Wes Murphy spent his formative childhood years grifting and conning with his Pops. They were a bunko team – swindling to get by and make a buck. But that all changed when one con too many landed Wes in a halfway home, where he discovered and nurtured his love of cooking.
Years later and Wes is making good on his talents, studying at the acclaimed Academy of Culinary Arts. He’s in his second-to-last rotation, with high hopes of gaining an internship at Adam Temple’s infamous Market restaurant in NYC. The only thing standing in Wes’s way is a little chemistry class, and a much sought after passing grade. If Wes doesn’t pass chemistry 101, he doesn’t get his dream placement. But when the geekishly adorable Dr. Rosemary Wilkins takes over the class halfway through the semester, Wes thinks he has found a way to gain extraordinary new insights into the art of chemistry . . .
Rosemary Wilkins was a child prodigy. The daughter of an infamous novelist and respected lecturer, Rosemary was bound for greatness. But being a Mensa member isn’t as fulfilling as some may believe. Rosemary has felt used and flaunted her entire life. It seems everybody wants her genius, not her. And she’s not entirely sure that her new student, Wes Murphy, is any different. All this talk about an aphrodisiac science experiment is all well and good, but does he want the grade or the woman handing them out?
‘Just One Taste’ is the third book in Louisa Edward’s ridiculously delicious ‘Recipe for Love’ contemporary romance series.
We first met Wes Murphy back in second book ‘On the Steamy Side’. Wes was introduced as the new Market intern (after the last one went bonkers!) and he came with a shady back-story about an illicit student-teacher romance and a broken heart pining for him back at culinary academy. In ‘Just one Taste’, Edwards backtracks and gives fans the full explanation to Wes’s back-story . . . and boy, is it good!
Wes falls for his chemistry teacher, Dr. Rosemary Wilkins. Rosemary is actually at the academy conducting research for a scientific journal she’s writing, and her presence is a real coup for ACA since she is so infamous in the science world. Rosemary was my favourite thing about this book. She is adorkable – and I feel the best way to describe her is to say she’s just like Dr. Amy Farrah Fowler from ‘Big Bang Theory’ (but blonder, and with a pert ass). Seriously, she wears Wookie and Browncoats t-shirts (I loved her the moment she revealed herself to be a ‘Firefly’ fan!). Rosemary doesn’t say “For God’s sake!” she says “For Buffy’s sake!”. I found my girl-crush cemented after Rosemary awakens from a particular sex dream about Wes and role-play. . .

With a sigh, Rosemary opened her eyes and blinked sleepily into the darkness, glad there was no one there to witness her skin glowing bright red with embarrassment. Her blush felt hot enough to set off radioactivity alerts.
“Hi,” she said to the featureless black of her room. “My name is Dr. Rosemary Wilkins, and I have Star Trek sex dreams.”

Wes, by contrast, is a saucy delight. He’s all tan and sinewy, with a smirk to die for. I definitely got the reformed bad-boy vibe from him . . . but even though Wes and Rosemary are polar opposites, it was never hard to believe that Wes would fall for her and vice-versa. Their research into aphrodisiacs aside, these two just fit. Rosemary needs to lighten up, and Wes needs someone to believe in him. These two were precious, and I loved them!
If I had any problems with this book it has to be the rather convoluted story about Wes being an ex con-man. Edwards sets this story up to be the big obstacle for Wes and Rosemary and for a little while you hold your breath expecting Wes to fall into his old, scheming ways. But this story never felt fully fleshed-out, and it just seemed a little too tangled and frayed to pose as a real, pivotal hurdle for the romance . . . which, incidentally, meant there wasn’t all that much tension in the relationship, no ‘will-they-or-won’t-they’ juiciness.
One of the things I L-O-V-E about the ‘Recipe for Love’ series is the ongoing story of Jess and Frankie. Frankie is Market’s sous-chef, and Jess is a part-time waiter at the restaurant. Frankie is Jess’s first boyfriend since coming out to his sister and being honest with himself. They got together in ‘Can’t Stand the Heat’, but hit a few major bumps in ‘On the Steamy Side’. I love Frankie and Jess together, so I had my heart in my throat regarding their broken relationship in ‘Taste’ (seriously, they are the Qhuay of the ‘Recipe for Love’ series!). I love (and appreciate) that Edwards offers Jess and Frankie’s romance as the one continuous side-story of the series. It means that fans can get really invested in their story, and caught up in the melodrama. I don’t want to give anything away about the status of their romance in this third book, but I will say I look forward to where they go from here . . .
Edwards’s writing is a sumptuous delight. I love just how committed she is to her series theme – everything begins and ends with the food, the restaurant atmosphere and the hectic cooking that goes on in the kitchen. Edwards remains true to her theme in every aspect of the novel. It’s very subtle, and never over-cooked, but if you look for it you can read just how much Edwards has imbued her series with flavour . . . whether she’s using a food simile to describe someone’s emotion, or infusing a romantic declaration with food parallels;

Drawn to her like butter melting toward the hottest spot in the pan, Wes knelt up and shuffled around the blankets until he was right there, next to her, above her, sharing the same air with their quickening breaths. “I checked to make sure not a single ingredient has ever been classified by myth, legend, old wives, or science, as an aphrodisiac.”
“And why did you care about that?” A slick pink tongue darted out to wet her plump bottom lip, leaving it shiny and tempting as hell.
Wes nearly groaned. “Because,” he panted, sliding one hand around her back and lowering her gently down to the blanket, “when I kiss you, I don’t want there to be any confusion about why you kiss me back.”

I have said it once and I’ll say it again; the setting of an infamous NYC restaurant is genius for a contemporary romance series! Edward’s has given herself boundless opportunities to write about juicy relationships and smouldering hook-ups. Forget hot-under-the-collar, it’s what’s heating up in the kitchen that counts!
4/5 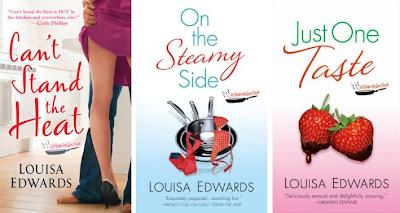 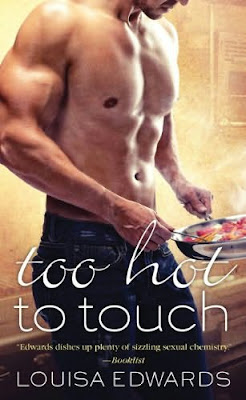