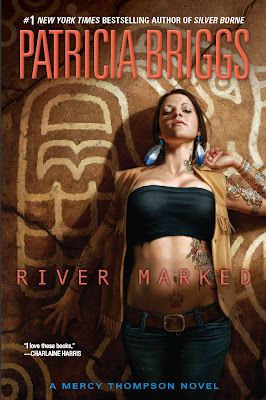 ** This review contains spoilers of ‘River Marked’.
Read at your own peril **

From the BLURB:
Car mechanic Mercy Thompson has always known there was something different about her, and not just the way she can make a VW engine sit up and beg. Mercy is a shapeshifter, a talent she inherited from her long-gone father. She’s never known any others of her kind. Until now.
An evil is stirring in the depths of the Columbia River—one that her father’s people may know something about. And to have any hope of surviving, Mercy and her mate, the Alpha werewolf Adam, will need their help…
Moon River
Mercy has finally found her place in the world, and it’s right beside Alpha werewolf Adam Hauptman. When ‘River Marked’ opens, Mercy and Adam are about to formally embark on their mateship and life together. And what better way to celebrate than with a honeymoon in the Pacific Northwest, camping along the Columbia River in an impressively luxurious trailer on-loan from a scary fae.
Mercy and Adam finally have time to themselves. There are no vampires, demons or werewolf politics to interrupt their blissful honeymoon . . . until a night-time stroll lands Mercy and Adam into the thick of a Native American myth, complete with terrifying water creature.
‘River Marked’ is the sixth book in Patricia Brigg’s incredible ‘Mercedes Thompson’ urban fantasy series.
Fans have been anticipating this book from the first moment that Mercy and Adam snarked with undercurrents of spark in ‘Moon Called’. We’ve read them through a tumultuous love triangle and numerous near-death encounters. Not to mention the ten years of pent-up romantic frustration as Mercy and Adam silently pined for one another across the expanse of a rusted old rabbit with cinder-block wheels. Briggs assured fans that ‘River Marked’ was the book. The one where Adam and Mercy would have plenty of loved-up page-time and enough romance to placate fans . . . thankfully, Briggs kept her promise. Ten-fold.
Forget Prince William and Kate Middleton – Mercy and Adam have the wedding of all weddings in ‘River Marked’. I knew this would be a very special ‘Mercy’ installment when I started blubbering my way through the ceremony and reception chapters. My pathetic weeping reached fever-pitch when Bran walked Mercy down the aisle. . .

The organ music faltered under the weight of it and sputtered to a halt.
“Pup,” he said into the sudden silence, “today I'm giving you one of my treasures. You see that you take proper care of her.”
Adam, not visibly cowed, nodded once. “I’ll do that.”

‘River Marked’ is definitely the Adam-and-Mercy show. Right after they get hitched, the newlyweds go on a camping honeymoon reminiscent of Lucy and Desi in ‘The Long, Long Trailer’.
River of Time
Briggs often writes Mercy with a cachet of secondary characters to bounce off of – whether they be Fae, werewolves or vampires - Mercy is very rarely an isolated character. But ‘River Marked’ almost feels like a stripping-down of the character Briggs has built up, like this instalment is a chance for readers to re-examine Mercy before she and Adam start a new chapter to their lives as a mated pair. Mercy has come a long way since ‘Moon Called’, and it’s especially evident when Briggs sheds her character of all the usual crutches and supports. It was nice not to have the Tri-Cities werewolf pack interrupting Mercy and Adam’s time together. For once, Mercy isn’t concerning herself wholly with Stefan and Zee’s well-being. There are a lot of nice moments with Mercy and Adam together, just being. And it’s exactly what fans have been clamouring for, ever since these two crazy kids got together. Without every other secondary character around to constantly propel them, it’s refreshing to read how good Mercy and Adam are for each other. It doesn’t get more romantic than that.
‘River Marked’ was definitely touted as being the book that Mercy & Adam fans have been waiting for . . . but ever since Daniel Dos Santos’s cover-art was revealed, fans have also been anticipating another aspect to this book. Mainly, the hinted promise of Briggs examining Mercy’s Native American roots.
Dog River Blues
It’s all there on the gorgeous cover. Mercy dressed in a fringed vest, with feather earrings dangling. Standing before a wall decorated with ancient markings. She has never been drawn with so much emphasis on her Native American roots, which she inherited from her deceased father, Joe Coyote. This is the other big draw-card of ‘River Marked’, as Briggs finally writes (at length) about Mercy’s paternity. And it’s all drawn out when Mercy ventures to the Columbia River and meets some of her Native American ‘walker’ ancestors, some of whom may well have known her father . . .
The book did drag in the middle, as many reviewers warned. But I think a lot of that came from Briggs needing to write back-story concerning Mercy’s upbringing and her father. Mercy has always been reluctant and ill-informed about her conception and parentage. As a result, Briggs has to fill holes and supply a lot of explanations. This means a lot of summary writing and Mercy recounting events from her childhood and pieced-together stories about her father.
I must admit, I wasn’t terribly satisfied with Briggs’s back-story concerning Joe Coyote. She doesn’t really offer up wholly-satisfying answers concerning Mercy’s father. In some ways, she has made things even more complicated and elusive. It’s not helped by Native American storytelling explanations, concerning berry-sisters and avatars. I'm treating the storyline about Mercy’s father the same way I did Samuel’s love interest in ‘Silver Borne’. It was a storyline that fans were excited for, but it was ultimately a (teeny-tiny) let-down. That being said, the same way there is room for development between Samuel and Ariana, it’s also true that there is room for Briggs to move and improve the story of Mercy’s father. . .
But honestly, that’s a small complain in one very satisfying book.
Cry me a River
Patricia Briggs recently announced to fans that the third (and rabidly anticipated) ‘Alpha & Omega’ book wouldn’t be coming out until January 2012. This delay is because Ms Briggs has altered her contract to one book per year . . . so; the next ‘Mercy’ instalment will be coming in 2013. After that, Briggs is contracted for at least three more ‘Mercy’ books, ending the series at ten books.
Yes, it will be hard (I may very well get ‘the shakes’) to get through each second year without Mercy, a character whom fans have relied upon for yearly release without fail. The up-shot is that Charles and Anna’s story is equally compelling and romantic . . . also; ‘River Marked’ was an utterly satisfying book to have before a long hiatus. Briggs has treated fans very well with this sixth instalment. We asked for loved-up Mercy/Adam gooiness, we got it! We asked for back-story about Mercy’s father, we got it! We asked for more information about ‘walkers’, and by golly we got that too! And on top of all that, Briggs introduced fans to the mystifying and beautiful world of Native American legend. She set her book by the colossal Columbia River, imbuing the novel with a sense of majestic scenery that serves as a fitting setting before Mercy's long interval.
The next year will be tough without Mercy (literally, merciless), but ‘River Marked’ was one hell of a send-off for our coyote girl.
4.5/5