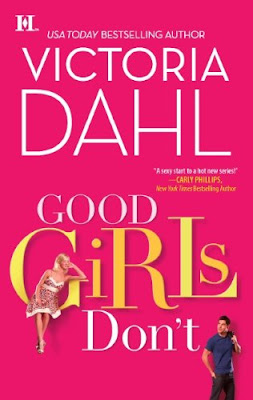 With her long ponytail and sparkling green eyes, Tessa Donovan looks more like the girl next door than a businesswoman – or a heartbreaker. Which may explain why Detective Luke Asher barely notices her when he arrives to investigate a break-in at her family’s brewery. He’s got his own problems – starting with the fact that his partner Simone is pregnant and everyone thinks he's the father. The last thing he needs is a nice girl like Tessa getting under his skin.

Tessa has her hands full, too. Her brother’s playboy ways may be threatening the business, and the tensions could tear her tight-knit family apart. In fact, the only thing that could unite the Donovan boys is seeing a man come after their “baby” sister. Especially a man like Luke Asher. But Tessa sees past the rumours to the man beneath.

Tessa Donovan’s week is going from bad to worse. First her younger brother ruins a business deal for her family’s brewery by sleeping with a client’s daughter. On the same day there’s a break-in at the brewery; computers are stolen and the police suspect a state-wide crime ring is behind the theft.

The only silver lining in the whole debacle is police officer Luke Asher – a handsome and captivating man who was college friends with Tessa’s younger brother, Jamie. But rumours abound about Luke – whisperings about his pregnant police partner and his messy divorce.

Victoria Dahl bleeped onto my radar last year with her sexy/sweet ‘Tumble Creek’ contemporary romance series. So I was really excited to receive an advanced copy of her new September-released book from NetGalley. Sadly, ‘Good Girls Don’t’ didn’t live up to my expectations.

The Donovan Brothers Brewery is the sticking-point of this new romance series. The brewery is run by siblings Tessa, Eric and Jamie. These three share a close bond, since their parents died when they were young, leaving Eric the family patriarch at the age of twenty-four. But now the siblings are in their adulthood and their relationship is somewhat strained. Eric continues to act more like a father than a brother, especially where Jamie is concerned. Jamie is nothing but a fun-loving Lothario in Eric’s eyes, and he can’t shake viewing his younger brother with vague disapproval and thinly-veiled disappointment. Jamie is given few responsibilities in the brewery, and when Tessa gets wind of his dalliance with an important client’s daughter, she nearly has an apoplexy. While Eric and Jamie have a strained relationship, Tessa takes it upon herself to be peace-keeper between them. Taking the burden of their bickering and concocting outlandish ways to smooth their temperaments and keep them out of each other’s hair.

I really liked the family-dynamic of this book. The Donovan family is akin to the town of Tumble Creek, in being a touchstone for the series and a nice basis for the characters. The sibling dynamic will prove to be a well-spring of drama, tension, fun and love in coming books, if ‘Good Girls’ is any indication. The siblings had a tragic childhood, which has bought them together to form an unbending (and sometimes unyielding) bond. But I found the two brothers more interesting than the sister in this first book. Eric is clearly a man who had to grow up too quickly – he had responsibility to his siblings and the family business, and as such has never had much time for fun and frivolity. Jamie, on the other hand, has always been disregarded by his two older siblings – and so deliberately lives up to their poor expectation of him, courting women and having fun, while deep down desperate to prove himself. These two brothers have such an interesting relationship, I can’t wait to read their stories and meet the women who ensnare their hearts.

I really liked the general brewery-basis of this series and will be reading the next two books. But as a series debut, ‘Good Girls Don’t’ didn’t impress me. I think it was a case of too many uninteresting and intersecting stories detracting from the main romance.

Dahl has so many back-stories and sub-plots going on, and none of them terribly interesting. There’s the story about the brewery break-in. A side-story about Luke’s police partner, Simone, and her pregnancy that has everyone whispering the baby is his. A story about Tessa negotiating deals with a slimy executive. Then there’s the rumour about Luke’s divorce that ended less than amicably. All of these plots are swirling around, but none of them hold much fascination. We get lots and lots of page-time dedicated to Luke and Simone’s police work on the brewery break-in; but these scenes merely reveal that police-procedural is not Dahl’s forte. Luke and Simone’s investigation drags into paperwork, running lab tests, reading computer files, making phone calls and occasionally chasing down small-time criminals for the hell of it. The really juicy stories about Luke’s questionable morals are the really interesting points – but there’s not much mystery about them since we get Luke’s interiority and his side of things.

I initially liked Luke and Tessa’s romance. He’s clearly in a very broken, dark place and she brings out the fun in him with her natural charisma and infectious personality. I chuckled at quite a few of their exchanges;

“So tell me why you look so beat up today. Big murder case?”
“You’re determined to turn me into a TV show, aren’t you?”
“Well, for a minute there, you were headed into Jerry Springer territory. I’m trying to steer you back toward CSI.”

But towards the end of the book I wasn’t finding Luke and Tessa’s romance terribly romantic. It’s partly because it spans a mere two weeks – not much time to be anything but a healthy flirtation and heated coupling. But also because there wasn’t much tension. Dahl started out by writing large obstacles for them in the form of Luke’s shady romantic past and possible love child. But like I said, because we get Luke’s (truthful) admissions about these accusations it detracts from their romantic tension and takes out all the ‘will they or won’t they?’ fun.

Victoria Dahl excels in writing community-driven, family-orientated contemporary romances. The touchstone of her new ‘Donovan Brothers Brewery’ is a family-run business where the sibling’s personalities clash and tensions are rife. I love the three character of Eric, Jamie and Tessa – their dynamic and strong bond is sure to offer up some very interesting stories in the two upcoming books. Dahl is also a master of romance – writing steamy couplings and mouth-watering sex scenes. Still, ‘Good Girls Don’t’ was a flat book for me. Too many uninteresting (and lengthy) subplots, coupled with a romance that was little more than a two-week fling left me unimpressed. Regardless, I will be looking out for ‘Bad Boys Do’ in October this year. 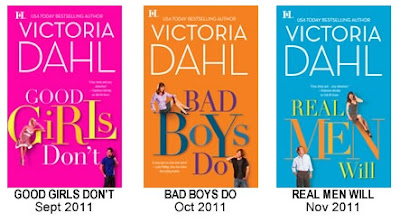