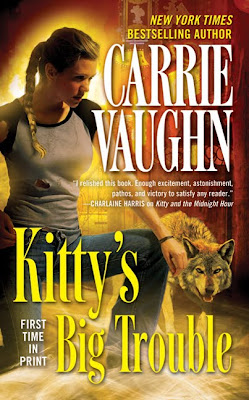 Kitty Norville is back and in more trouble than ever. Her recent run-in with werewolves traumatized by the horrors of war has made her start wondering how long the US government might have been covertly using werewolves in combat. Have any famous names in our own history might have actually been supernatural? She's got suspicions about William Tecumseh Sherman. Then an interview with the right vampire puts her on the trail of Wyatt Earp, vampire hunter.

But her investigations lead her to a clue about enigmatic vampire Roman and the mysterious Long Game played by vampires through the millennia. That, plus a call for help from a powerful vampire ally in San Francisco, suddenly puts Kitty and her friends on the supernatural chessboard, pieces in dangerously active play. And Kitty Norville is never content to be a pawn. . . .

Kitty Norville is one curious werewolf. When she gets wind of a rumour about Civil War icon, William T. Sherman’s possible wolfy side, she turns into a dog with a bone. Kitty becomes desperate to pick the brain of every vampire and find out which other historic legends had a supernatural helping hand.

But Kitty gets side-tracked in her mission when the vampire Anastasia calls asking for help. She’s in San Francisco and on the hunt for an artefact of extreme power – and she needs to find it before Roman does.

So Kitty, with her alpha mate Ben and their unofficial human pack member, Cormac, trot off to San Francisco to get caught up in the usual vampiric Long Game and put an end to Roman once and for all.

I have been a big fan of Vaughn’s ‘Kitty Norville’ series for a long time now. Her books are the quintessential urban fantasy – based around a werewolf radio host who uses her own struggles with lycanthropy and the supernatural community to reach out to like-minded and curious listeners. I like Kitty best of all because her books have been a real journey. She started out as a down-trodden werewolf, low on her pack’s pecking order – but over time and with growing courage, Kitty has risen to become alpha of her own pack and has forged strong bonds with two very important men – her husband Ben and his hunter cousin, Cormac. I am a fan of this series – but recent books have blunted my enthusiasm somewhat, and ‘Kitty’s Big Trouble’ is more of the same.

This ninth book starts off with an interesting premise. Kitty is doing some digging and discovers Civil War transcripts that discuss William T. Sherman’s werewolf background. This, of course, kicks our curious Kitty off on a gossip quest – she speaks to her closest vampy friends and tries to pick their brain about famous supernatural icons. Of course, the famous supernatural’s storyline has been discussed in other book series – most notably with the adorable character of Bubba in Charlaine Harris’s ‘Sookie Stackhouse: Southern Vampire’. But Vaughn takes such discussions to the slightly higher-brow, theoretical. This is an interesting bent, and I hope Kitty pursues this interest in the future. . .

But then the vampires step in and side-track Kitty’s hunt. The infamous bad-ass vampire, Roman, is on the hunt for a Chinese artefact, so Kitty and Co. have been called in to help keep it out of his hands. Once again, I really liked the Romance storyline – especially as it’s tied in with some fascinating Chinese mythology. Roman is also a notorious villain in the series, and I was happy to see his storyline revisited with such damning results.

Carrie Vaughn excels in writing high-octane action scenes. Her fights and brawls read like live-action movies on the page and the tension levels are always on a heart-palpitating high. The actual drama storyline is sinister and superb, and I cannot fault the detailed inner-workings of Chinese tradition and vampiric games.

What I have a problem with (and have been disgruntled by for the last few ‘Kitty’ books) is Carrie Vaughn’s determined avoidance of emotional development for her characters. The ‘Kitty’ series started off with such vibrant and complicated emotional relationships. Kitty first met Cormac when he was sent to kill her – a monster hunter with his sights set on the famous werewolf Kitty Norville. But what started as animosity turned into bewildering chemistry – and many fans were waiting with bated breath for Cormac and Kitty’s relationship to progress to the next level . . . and then Cormac’s lawyer cousin, Ben, entered the scene. At first he was nothing but an acquaintance, sometimes lawyer and then a sort-of friend to Kitty. But with a werewolf bite and sudden transformation Ben quickly came to mean a lot more to Kitty and the two soon embarked on a romantic relationship . . . while Cormac still seemed to be battling his feelings. When Cormac was sent to prison, Kitty and Ben’s relationship heated up – they become alpha mates and then husband and wife. And Cormac all but admitted his regret over not staking his claim on Kitty when he had the chance.

“You don’t have to worry about me,” he said, matter-of-fact, instantly – like a defence mechanism.
“Yes, I do,” I said.
“Get used to it,” Ben said, amused. “You’re part of the pack.”
“The pack?”
I hesitated, then said, “Pack of three. That’s what I've been calling us. I figure we have to look out for each other.”
“Huh,” he said, settling himself against the wall, adjusting his grip on the crossbow. I kept waiting for him to say something else, but this was Cormac. The strong, silent type.

Where we are in the series now is Kitty and Ben firmly established as a loyal and loving union . . . while Cormac has recently been released from prison. And that’s about it.

Vaughn hasn’t revisited Cormac and Kitty’s old attraction for a long time now. Kitty and Ben are bordering on dull – and even a quick mention of adoption in ‘Trouble’ is skirted over and relegated to a one-line utterance. For a lot of people the Cormac/Kitty ‘will they or won’t they?’ was a big selling point of the books – some even had hopes that it would turn into a heated love triangle between Cormac/Kitty/Ben. But the old romance hasn’t been mentioned for books now – Kitty and Cormac don’t share a scene with just the two of them in ‘Trouble’ and Cormac is so steely tight-lipped that you almost forget his presence in many scenes.

I don’t know why Vaughn seems doggedly determined to avoid discussing any sort of emotional/character development in her series anymore. Considering that the first few books were all about Kitty’s growth from subservient to alpha – and she went through a rather harrowing character arc – I can’t believe that recent books have stunted her so much. Kitty and Ben don’t even share many intimate scenes in ‘Trouble’, nothing to remind fans that they’re not this boring, steady couple who are becoming exceedingly dull in their matrimony.

And the lack of Cormac/Kitty is atrocious. He is such a beloved fan-favourite character – I think readers could forgive his lengthy stint in prison if only Vaughn would have made his freedom interesting by revisiting his feelings for Kitty with a vengeance. No such luck, and mores the pity.

I do still love these books – Vaughn’s action scenes are unparalleled brilliance. But I am quickly losing steam with the series because Vaughn’s characters seem to have stunted emotional growth.