The Re-Read Reminisce is all about recalling an old series or book that has pride of place on our keeper shelf, but that we haven’t thought about in a while. In Re-Reading the books we’ll be remembering why we fell in love with them in the first place, what they’ve come to mean to us and why we think any of you who are unfamiliar with the titles should give them a read.

Our first Re-Read Reminisce will be: Jeri Smith Ready's 'Aspect of Crow' trilogy!

What characters in the series most stood out for you the first time you read it? And what about this time around?

Danielle: Oh, Rhia and Marek stole the spotlight for me, absolutely. They had such a unique love story that just drew me in, completely. That’s why in the second book I really felt the pain of their separation - and in the third book I had my heart in my throat the whole time, hoping they’d both make it out alive.

But in this second reading, it was all about Sura and Dravek! Hot damn! In my first reading of the series I was still grappling with Rhia and Marek’s diminished roles - I don’t think I paid enough attention to Smith-Ready’s new additions to the series. In this re-read I was totally suckered into Sura and Dravek’s forbidden romance - it was so steamy and conflicted, and even knowing how it all ended I still read with my heart-rate pumping!

Larissa: That is so funny, because on my first read I was also thoroughly involved with Marek and Rhia’s plea and when the third book came along and they became sort of background, I had a hard time dealing with it for a little while. But when I realized that the main characters were simply the kids we had been seeing around and survivors from the previous books, I freaked out! I thought that was so freaking brilliant LOL. The first time I read the series I was totally drawn to Nilik for some reason, I even named my iPod after him =P, I also loved reading about Alanka and Philip. However, this time around I was completely obsessed with Davrek and Sura. Don’t get me wrong, I liked them back then, but this time, book 3 was all about them =D

Did the ending still impact you, even though this was a re-read and you knew all the pitfalls and outcomes?

Danielle: Yes, yes, and YES - and in many ways, more so! I remember when I read final book ‘The Reawakened’ the first time round I was somewhat disappointed that Rhia and Marek’s children (especially Nilik) didn’t get more page-time. I thought this book would be all about them - the next generation of our main protagonist. But in this re-reading I was so much more invested in Sura and Dravek’s romance that I found myself on a whole new roller-coaster ride with them. Even knowing how it all ends (I don’t want to spoil it for anyone!) I still had my heart in my throat and my butt on the edge of my seat. It’s a testament to Smith-Ready’s talent that even a re-read can keep me rapt.

Larissa: Absolutely! I was also so involved with Davrek and Sura that their story was just as riveting this time around. I even found myself crying, AGAIN! How incredible is that! Honestly, I am not the kind of person that re-reads everything I love, it has to be something that impacts me thoroughly to get me to do that and this series is definitely up there and Jeri has the power to make me feel so much, even when I know the end.

You’d recommend the ‘Aspect of Crow’ series to people who also enjoyed …?

Danielle: Suzanne Collins’s ‘Hunger Games’. In this second reading it really leaped out at me how ‘Aspect of Crow’ is like a grown-up, more fantastical ‘Hunger Games’, in many ways. The Descendants are like the Capitol residents - and the ways that the different societies are separated is somewhat similar to the Districts. There’s a big concentration on politics in both series (especially regarding war and the uprising of lower classes against rich oppressors). Definitely, if you liked ‘The Hunger Games’ but wanted a bit more sexiness, then ‘Aspect of Crow’ is a must-read!

Larissa: Totally agree Danielle! I had never thought it like that. Yeah, The Aspect of Crow Trilogy is definitely a more adult and sexier Hunger Games with a Fantastical touch.

I would also recommend it to anyone that has always wanted to try Fantasy out but doesn’t know where to start! =D You won’t regret it!

These books obviously have pride of place on your ‘keeper shelf’ and are special for being worth a revisit. If you could - what would you say to Jeri Smith-Ready about her epic ‘Aspect of Crow’ series?

Danielle: THANK YOU! Seriously, honestly and from the bottom of my heart - thank you! I don’t know if I would have kept reading the paranormal/fantasy genre if not for this series. When I first read these books I was sort of on-the-fence about the genre in general, and I needed something epic and brilliant to sink my teeth into and get me hooked - and that’s what your ‘Aspect of Crow’ did for me. It was my gateway-book, so to speak. One hit and I was hooked, for good and for life. So, thank you - if not for Rhia and her adventures I may never have delved so deep into the fantastical - and I would have missed out on so much! Me (and my imagination) thank you!

Larissa: I’ll copy Danielle and say: THANK YOU SO FREAKING MUCH! I am not an avid Fantasy reader but I do enjoy the genre and your trilogy was such a perfect mix of incredible world building and unforgettable characters that it’s impossible to not fall in love with it. 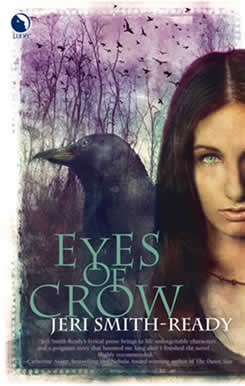 Larissa and I each have x1 copy of Smith-Ready’s (Wonderful! Amazing! See above!) first book in the ‘Aspect of Crow’ series to give away. To be in the running for this book, all you have to do is;


♥ Become a follower of my blog (NOT mandatory, but appreciated)

♥ Include a way to contact you (e-mail addy is fine)

♥ This is an INTERNATIONAL giveaway! (anywhere Book Depot ships)

♥ Contest closes September 30th
The two lucky winners will be announced on ALPHA reader and Larissa's Bookish Life on October 2nd.
Posted by Danielle at 3:14 PM