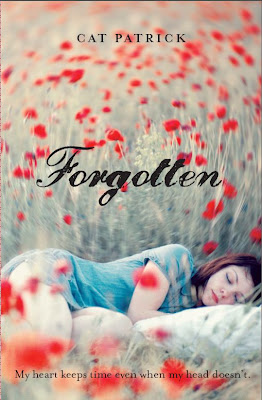 I remember forwards. I remember forwards, and forget backwards. My memories, bad, boring, or good, haven't happened yet. So I will remember standing in the fresh-cut grass with the black-clad figures surrounded by stone until I do it for real. I will remember the funeral until it happens - until someone dies. And after that, it will be forgotten. Here's the thing about me: I can see my future, but my past is blank. I see the future in flashes, like memories. I remember what I'll wear tomorrow, and a car crash that won't happen till this afternoon. But yesterday has evaporated from my mind - just like the boy I love. I can't see him in my future. I can't remember him from my past. But today, I love him. And I never want to forget how much.

London Lane can’t remember yesterday, but she knows what will happen tomorrow.

She can’t remember the beautiful new boy at school, but she knows she has fallen for him.

Her best friend is angry at her, but London doesn’t know why.

London’s mother is keeping secrets, but she has to rediscover them every day.

Because London forgets everything – but remembers what’s to come. Ever since she was six years old, London’s mind has reset itself at 4:33AM every day. She writes everything down, living her life note-by-note to remember.

But when a vision of a funeral intrudes on London’s mind she has to work hard to figure out who of the people she loves now, won’t be alive in her future.

‘Forgotten’ is the debut young adult novel from Cat Patrick.

Every once in a while a book comes along . . . you can be five pages or fifty into reading it, but you already know you have to pass it on. You must implore friends and family to read it – you get a visceral urge to press it into a beloved’s hands and just say, “Read it. Trust me.”
Cat Patrick’s ‘Forgotten’ is just such a book.

London Lane is somewhat psychic. Where there are holes in her past, she has sight stretching into the future – she sees herself well-travelled, pregnant, in love, out of love and living a full life. But the here and now is a different story. Her mind resets and her yesterday’s are wiped clean. So she writes notes to herself – detailing what she wore, who she talked to, if she has a Spanish quiz and what new romantic disaster her friend, Jamie, has gotten into. London Lane is a veritable Leonard Shelby – scribbling her life onto notes to fill herself in on what she will inevitably forget.

London’s memory loss is a burden, her visions an oddity. But ‘Forgotten’ is firmly grounded in reality – strange as London’s foretelling may be, Patrick does not make much of it beyond being an interesting character quirk. Initially this is a little jarring, as a reader you are inclined to curiosity about London’s Cassandra-esque visions, you want her to investigate and find answers. But when London’s vision shows her a funeral to come, there are far more pressing plot matters than the origins of her blessing/curse. And since ‘Forgotten’ is grounded in reality (with only a small flight of visionary fancy) London tackles her foretelling realistically – in the real world you’d accept the perceived craziness of your predicament and work around it, as London does. You wouldn’t make a big show and dance about being able to see the future – you’d want to b as normal as possible.

In the end I was glad Patrick didn’t turn ‘Forgotten’ into a full-blown paranormal story. Instead, the novel is an interesting exploration of grief, remembrance, guilt and fated love. The story is richer for having a character with a slight supernatural skill who tries hard not to be wholly defined by it.

At its heart, ‘Forgotten’ is a love story. The girl who can’t remember finds a boy who she falls in love with again and again every day, as though it’s the first time. Luke Henry is the charming new boy at London’s school who takes an instant shine to her loner/loyal personality. But London doesn’t see Luke in her future – so she lies to herself and breaks her own heart, trying to wipe away yesterday’s feelings for him. But, the heart wants what the heart wants – and their love grows despite London’s determined forgetting.

I wonder whether my heart keeps time even when my head doesn’t. Maybe that’s why I feel so much for Luke right now, even though I technically just me him this morning in study hall.

Luke and London’s romance is superb – it’s ‘The Time Traveller’s Wife’ meets ‘50 First Dates’ – and will go down as one of the greatest YA love stories of 2011. Forget vampires and fallen angels – Cat Patrick has given us epic love with a girl who forgets and the boy determined to make her remember. Sublime.

Tears upon tears splat on to the lined pages in my hands as I read about a nightmare come true. Quickly, I wipe away the saltwater so it won’t fade the ink. Because even as my chest caves in and makes me hate the chipper birds and everything else, I know that I needed to read this today, and I need to read it again tomorrow.
For me, reading is remembering.

Throughout the book I had to keep pinching myself that this is Cat Patrick’s debut novel. I needed to keep reminding myself, because ‘Forgotten’ is not the book of a novice or one-hit-wonder. It’s richly intricate and heartbreaking – London’s psyche duality aside, Patrick has managed to layer a love story and mystery atop an already complex character-explorative plot. She has so many story tendrils unfurling throughout the book, but it never felt like too much or too hectic. Everything fit beautifully – the various stories fitting like puzzles pieces and clicking with lovely finality by book’s end. And, mark my words, ‘Forgotten’ introduces Cat Patrick as an author to watch – if she’s this good in her debut I can’t wait to read what she has waiting up her sleeve.

Beautiful and beguiling, ‘Forgotten’ is a book aplenty – offering an epic love story, cunning mystery and fascinating character exposé about a girl who forgets yesterday but remembers the upcoming. ‘Forgotten’ had me devoted after one chapter. By book’s end I was ready to stand on a street corner and spruik the sucker. But more than anything I felt the need to come online and virtually implore anyone who might be perusing my blog to; “Just read it. Trust me.”