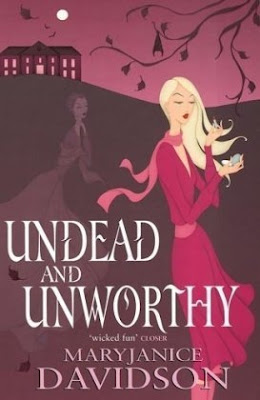 "No one does humorous romantic fantasy better than the incomparable MaryJanice Davidson" (The Best Reviews), and nobody reigns over the undead with more savvy than her heroine Betsy Taylor, back to rule the nights as Vampire Queen--and survive the days as a new suburban bride. But it's not all marital bliss. Betsy's husband, Sinclair, has been perusingThe Book of the Dead, Betsy's being hounded by a ghost who's even more insufferable in death than in life, and a pack of formerly feral vampires has decided to pay an unwelcome visit...

At the end of the sixth instalment, ‘Undead and Uneasy’, Davidson mentioned in an author’s note that the next few books in the ‘Queen Betsy’ series would be focusing on a new plot trajectory, like a mini-trilogy within the already established series.

‘Undead and Unworthy’ in many ways stays true to the good old Betsy. She has many of the same problems – a sultry and conniving husband, vampire minions she doesn’t know what to do with and a vampiric kingdom she’s not entirely sure she’s equipped to run. But Betsy is also battling a few new issues – like married life to a husband who is keeping secrets, a rocky ‘friendship’ with her bestie’s boyfriend (who, admittedly, wants to kill her). Not to mention an old problem is coming back to haunt the queen . . . the ‘Fiends’, dazed and wild vampire barbarians, are back and somewhat lucid while also homicidally intent on killing Betsy.

There’s certainly a lot happening in this book, and it does feel transitional. Davidson is putting a few old storylines to rest, while gearing up for a whole new trajectory for Betsy and co.

I was about to elaborate, when the front door was slammed open and an all-too-familiar voice greeted us with, “What the hell is going on? I leave this shitheap for three days, and the fuckin’ Fiends are loose, my boyfriend’s practically catatonic, and the smelliest bitch I've ever fuckin’ seen practically ran me down on the porch! Not to mention I nearly got into a fender bender with the devil who looks like Miss Fuckin’ February! Jesus fucking Christ, what the hell is going on?”
Antonia the werewolf was home.

Something I am looking forward to in future books is Betsy and Sinclair’s evolving relationship. In this book Betsy has a lot to deal with, and she does wonder if Sinclair will be comfortable and willing to put up with her many mini-disasters . . . though they are married, it’s obvious that Sinclair and Betsy have a lot to work on. Neither of them is prone to outpouring of emotions or long, romantic diatribes. But there is clear affection between the two and I am eager to read how Davidson explores their relationship while staying true to their prickly dispositions and outlandish characters.

‘Undead and Unworthy’ is perhaps the darkest ‘Queen Betsy’ book so far. There’s death and foreboding, and Betsy is questioning the danger her future holds while concerned for those closest to her. I was quite shocked by the finale of this book – it’s sad and bloody and definitely ends on a note of sombreness that the ‘Queen Betsy’ series is unused to. But I like this new trajectory that Davidson is taking fans on . . . Betsy is manning up and taking responsibility while managing to remain fabulous.