'One Grave at a Time' Night Huntress #6 by Jeaniene Frost 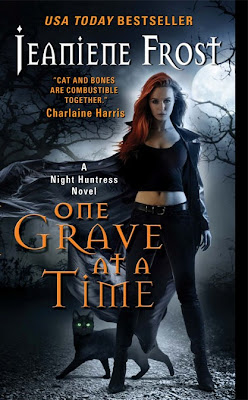 The grave is one wrong step away.

Having narrowly averted an (under)world war, Cat Crawfield wants nothing more than a little downtime with her vampire husband, Bones. Unfortunately, her gift from New Orleans' voodoo queen just keeps on giving--leading to a personal favor that sends them into battle once again, this time against a villainous spirit.

Centuries ago, Heinrich Kramer was a witch hunter. Now, every All Hallows Eve, he takes physical form to torture innocent women before burning them alive. This year, however, a determined Cat and Bones must risk all to send him back to the other side of eternity--forever. But how do you kill a killer who's already long dead?

In the lead up to All Hallows Eve, a misogynistic ghost plans to kidnap and kill three ‘witch’ women . . . but not if the Red Reaper, Cat Crawfield and her husband, Bones, have anything to say about it.

Heinrich Kramer was a bad man in life and has become downright evil in death. When Cat’s ghost friend, Fabian, introduces Cat to one of Kramer’s old victims (now a ghost herself) she and Bones know they cannot let this ghost murder more innocent’s.

Meanwhile, Cat’s old government squad of supernatural fighters is under new management – a Homeland Security moron called Jason Madigan. The new team leader is keeping secrets and combating Cat’s mind-reading with annoying infomercials. . . and he really, really doesn’t like vampires. Tricky, since the best in his team are members of the undead under Bones’s protection.

‘One Grave at a Time’ is the sixth book in Jeaniene Frost’s ‘Night Huntress’ series.

Okay. So, I didn’t love this instalment in one of my favourite paranormal series. I didn’t have the best time with fifth book, ‘This Side of the Grave’, and I was disappointed to read that many of the problems I had with that book are carried over into this one. . .

What frustrated me was that Jeaniene Frost pin-points the problem very early on in the book. Once we learn that Cat’s deceased uncle, Don, is still hanging around as a ghostly apparition and the new team boss, Madigan, is a Homeland henchman with a grudge against vamps . . . Cat notes that Bones isn’t really too disturbed by their piling problems, and he quite succinctly explains his blasé attitude;

“You seem pretty relaxed about this whole situation,” I said with mild exasperation, noting the nonchalance in his tone and vibe.
Bones all but rolled his eyes. “Why wouldn’t I be? For the first time in years, our relationship is solid, no one’s actively trying to murder us, and our closest mates are happy. Blimey, Kitten, if I were any more relaxed, I'd need a smoke.”

Yep. That about sums it up, now hand me a cigarette.

What used to make Jeaniene Frost’s series unique and a titillating treat for fans was her protagonist’s instant attraction. When everyone else in urban fantasy / paranormal romance was hell-bent on the build-up and ‘will-they-or-won’t-they’, Frost gave us ‘they will’ with heapings of loved-up bliss. Kate and Curran took four books to seal their mating. Adam and Mercy didn’t get hitched until the sixth book. Fans loved and loathed the tension of those relationships – but we revelled in Cat and Bones’s guaranteed love, established in book one and maintained (with a few minor hurdles) throughout the series.

Now, it would seem, fans are reading the pitfalls of continuing a story after ‘happily ever after’. The main problem, for me at least, was the plot-heavy focus on drama and action with little tension between the relationship development of Cat and Bones.

Yes, the Heinrich Kramer plot is chill-inducing and interesting. He’s a raping misogynistic ghost who can become corporeal on All Hallows Eve when he wreaks vengeance on ‘disgusting’ females. Great villain, plenty of action and drama. But to balance out that fairly heavy and sinister plot, I felt like ‘One Grave’ needed more love from Cat and Bones and more development from secondary characters.

I miss the Cat and Bones drama. I miss Cat’s jealousy over Bone’s sex-filled past, and Bones’s constant combat against Cat’s independent streak. I miss the sex! When Cat and Bones had all these emotional tug-of-wars with each other, it ended up in the bedroom with some interesting and heated couplings. Now, in their staid wedded bliss, they try to spice things up with some weird sexual adventures . . . but it doesn’t have the same heat as their Chapter 32 loving after Cat learnt of Bones’s heartbroken bedroom shenanigans with Annette. I don’t know what Cat and Bones need, at this point. We have at least two more books with them, and I don’t know how Frost can spice them up now. Dare I say, an amnesiac plot might be needed to start their relationship back at 0? (I’m sure she could do better than True Blood’s Emo Eric this season!).

Missing from this book are my three favourite secondary players – Vlad, Mencheres and his wife, Kira. Vlad, I can kind of understand, since he’s getting his own spin-off ‘Night Prince’ series and Frost probably doesn’t want to inundate us with him. But Mencheres and Kira haven’t really made a substantial appearance since their book ‘Eternal Kiss of Darkness’ when Kira was crowned as Menchere’s wife and intent on becoming a sort of vampiric policewoman. I know they’ve had small cameos in book #5, but I would love to revisit their relationship at length and gauge where it’s at now. Instead, we get Spade and Denise, Cat’s mother Justina and Bones’s best-buddy, Ian. Now, I’m not a fan of Denise and Spade, I find them lukewarm at best and dull at worst. Cat’s mother is a more interesting character, as a vampire-hating human who is now a vampire.

The one character who worked, whole-heartedly, for me in this book was Ian. I love Ian. Love, love, love! He’s all snark and sexy man-whore who I think has a lot going on underneath. Ian’s made even better in this book when a human psychic called Tyler gets a very big crush on him. I don’t know where Frost intends to take Ian’s character – my hope is for a ‘Night Huntress World’ spin-off, because I think it would be fascinating to read whoever captures Ian’s heart and stops his Lothario ways. I have an inkling it might be Justina, judging by some interactions in ‘One Grave’ – I’m not in love with that idea, only because I can’t picture Justina as a sexual being. It’s too weird as she’s Cat’s mum who has been an almost-villain in previous books. I just want more Ian. More, more, more!

What else worked for me in this book was the Jason Madigan storyline. This is shaping up to be a very big plot arc – one that could bring Cat and Bones back into the government taskforce fold (which would mean more Tate and Juan! YIPPEE!). Madigan is an annoying and conniving paper-pusher, and I can’t wait to read where Frost takes this storyline.

Overall, ‘One Grave at a Time’ wasn’t a great instalment for me. I think I’m starting to read the pitfalls of a tensionless happy coupling, and it makes me uneasy for what’s to come in future ‘Night Huntress’ books if it’s more of the same. I did LOVE Ian in ‘One Grave’, and I am intrigued by a new arc that looks to take Cat back to the government . . .