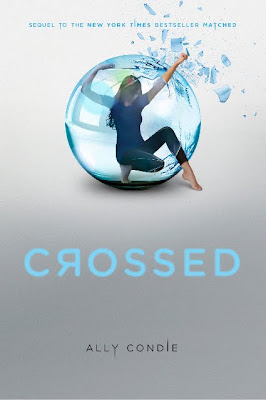 In search of a future that may not exist and faced with the decision of who to share it with, Cassia journeys to the Outer Provinces in pursuit of Ky - taken by the Society to his certain death - only to find that he has escaped, leaving a series of clues in his wake.

Cassia's quest leads her to question much of what she holds dear, even as she finds glimmers of a different life across the border. But as Cassia nears resolve and certainty about her future with Ky, an invitation for rebellion, an unexpected betrayal, and a surprise visit from Xander - who may hold the key to the uprising and, still, to Cassia's heart - change the game once again. Nothing is as expected on the edge of Society, where crosses and double crosses make the path more twisted than ever.

Cassia and Ky are living outside of Society, and both are forming plans on how to find one another.

Cassia is in a working camp helping to keep up appearances for the Society by planting cotton, in the hopes that the mysterious ‘Enemy’ will be swayed by prosperous plantations. Her official matching partner and best friend, Xander, has initiated their courtship once more in every hope that Cassia will join him in city central when her work detail is finished.
But it is while working the cotton fields that Cassia meets and forms an unlikely alliance with a fellow worker girl called Indie, who has just as many reasons as Cassia to make a mad dash and escape to the Outer Provinces.

By stark contrast, Ky is interred at a camp where aberrations are terrorized and brutalized. Ky’s days are spent hefting dead bodies into a supposedly poisoned lake. It is here that Ky meets and befriends a young aberration boy called Eli, who reminds Ky of Cassia’s little brother. He also forms an escape-alliance with a natural-born-leader by the name of Vick, who has his own girl he’s running back to.

Cassia and Ky have been separated by Society . . . but they have no intention of going gentle into that good night. Cassia has found an unlikely match in Ky, and she will do anything it takes to get back to him. Even if it means risking life and limb in the dangerous Outer Provinces, where whispers of a rebellion are hard to ignore . . .

‘Crossed’ is the second book in Ally Condie’s YA dystopian ‘Matched’ trilogy.

This second novel is an Odyssey, of sorts. Since the explosive happenings of ‘Matched’, Cassia has had her eyes opened to the short-comings of Society. She now sees the detriment in having only One Hundred Poems and One Hundred Paintings. She questions the life-limitation imposed at the age of 80. She has learnt to write when writing is forbidden, and she has fallen in love with an aberration boy who was not chosen for her. ‘Crossed’ is a very different book from ‘Matched’, purely because Cassia’s narrative is suddenly self-aware and questioning. Her easy compliance and blinkered non-questioning of ‘Matched’ is no more, and when ‘Crossed’ begins Cassia is an entirely different person.

We also get Ky’s interiority in this novel, and his viewpoint is decidedly romantic. Ky is so focused on getting to Cassia, it’s incredibly sweet to read his heartfelt yearning and just how deeply ingrained she has become on his heart, and vice versa.

If you love someone, if someone loved you, if they taught you to write and made it so you could speak, how can you do nothing at all? You might as well take their words out of the dirt and try to snatch them from the wind.
Because once you love, it is gone. You love and you cannot call it back.
Ky is heavy in my mind, deep in my heart, his palm warm on my empty hands. I have to try to find him. Loving him gave me wings and all my work has given me the strength to move them.

But ‘Crossed’ is much more than a romance this time around . . . in this second novel, Condie is setting up a legend. As Ky and Cassia search for one another, they also hear whisperings of an uprising against their society. Other people like them want to change the way their world is run, and an unauthorized Tennyson poem is the language of rebellion;

For tho’ from out our bourne of Time and Place
The flood may bear me far,
I hope to see my Pilot face to face
When I have crossed the bar.

In this novel Condie’s world-building expands beyond the regimented Society, to become something much, much more. Ky and Cassia travel across Grand Canyon planes and meet other outsiders like themselves – people who speak of a revered but undiscovered ‘Pilot’ who will lead the rebellion and bring freedom from the society. With this whispered-legend, it feels like Condie is writing the history of an uprising, concentrating on the grass-roots of the fight’s greatest leader – a veritable Che Guevara, Martin Luther King or Nelson Mandela in the making. But the big question remains – who is Pilot?

I loved ‘Crossed’. Condie had a big task to deliver something as impressively heartbreaking as ‘Matched’ – and she has done it with absolute aplomb in this second novel. ‘Crossed’ feels epic – as though readers are on the verge of a great discovery, being swept up in the hysteria of revolt and the promise of change. I can’t wait for the third book in this impressive series. 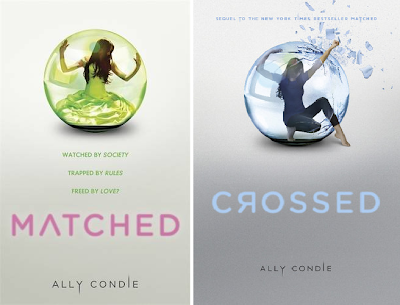