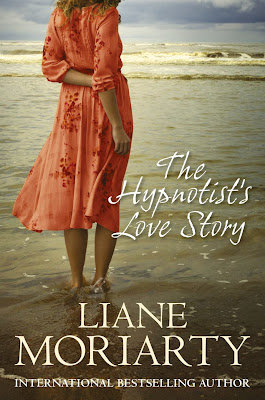 Ellen O'Farrell is an expert when it comes to human frailties. She's a hypnotherapist who helps her clients deal with everything from addictions to life-long phobias. So when she falls in love with a man who is being stalked by his ex-girlfriend she's more intrigued than frightened. What makes a supposedly smart, professional woman behave this way? She'd love to meet her!

What she doesn't know is that she already has. Saskia has been masquerading as a client, and their lives are set to collide in ways Ellen could never have predicted.

This wonderfully perceptive new novel from Liane Moriarty is about the lines we'll cross for love. It's about the murky areas between right and wrong, and the complexities of modern relationships.

As Ellen is about to discover, we're all a little crazy – even her.

Ellen might just be on the cusp of something. After three failed long-term relationships (one of which hurt, quite a lot) and trawling through Internet dating sites, Ellen might just have found something worthwhile. Patrick. A surveyor; man of maps. Widowed, with an eight-year-old boy called Jack. He might be ‘the one’ (not that Ellen necessarily believes in ‘the one’, thanks to a feminist single mother, but it would still be nice…)

But on their fourth date Patrick announces that he has something to tell Ellen, something quite important. Oh, no. He’s going to say he still isn’t over his dead wife – can never love again. Or he’s baffled by her hypnotherapy practice and doesn’t see himself with someone hippy-dippy like her. Or he doesn’t ‘do’ monogamy. The wheels start turning. Her heart and hopes start packing up, and she’s already mentally preparing herself to get over him. But Patrick’s confession is both a relief, and creepily curious. He has a stalker. Her name is Saskia. They dated for three years, and she has been stalking him for three years. Ellen is okay with this; she can handle a non-violent stalking ex-girlfriend. To be honest, she’s even a bit titillated by the news.

Saskia can’t believe it when Patrick seems smitten with ‘The Hypnotist’. Ellen. She probably eats legumes by the barrel-full and dances under the full moon. Honestly. Patrick doesn’t seem to understand that she and him are still connected – even if he ended things three years ago. Doesn’t he understand that she was Jack’s mother – she helped raise him and toilet-train him and teach him to say ‘please’. Patrick can’t just erase her from his life. So she’ll try and become apart of their new life – his and Ellen’s. If she can’t say her peace and let him know how much she hurts, then Saskia will be content to be on the sidelines, a third appendage to this budding romance.

I loved this book! I went into the novel with an open mind, thoroughly intrigued by the title and hypnotism focal point. I had a friend who was cured of nail biting via hypnotherapy, and when I worked in retail I had a regular customer who was a hypnotherapist (I admit, I was a little disappointed that he never wore capes and top-hats, just regular business-casual clothes). I loved the book, but not for the reasons I thought I would …

First of all, I have to say that the hypnotism isn’t really the crux of the story. It’s a convenient (and peculiar) plot trigger, and a thinly-veiled metaphor for relationships in general. Still, I did really enjoy reading about Ellen’s sessions and the finer details of hypnotherapy. It was fascinating to read the delicacies of wording, rhythm, and recollection. But I was also quite relieved that Moriarty (and Ellen) were aware of the stigmas attached to hypnotherapy as a quack profession. Ellen reveals that past boyfriends have treated her occupation with patronizing contempt, which is nothing compared to what her GP mother thinks of her practice. Plus, Moriarty has fun with the hypnotism schtick, and I found myself cackling at a few of Ellen’s insights into her profession of the mind;

‘I’m wondering if you can visualize a wall. And I’m sorry to tell you that it’s painted apricot. But the good news is you’re repainting it an exquisite blue. Your paintbrush is moving up and down in rhythmic strokes. Up … and … down. Up … and … down.’
Too complicated? Ellen had found she needed to be careful with her metaphors. Men often got too literal. A man might say afterwards, ‘You should have had me paint an undercoat first.’ Women tended to go off on tangents. One of her earliest clients had said that she loved to sunbake, so Ellen did what she thought was a pretty safe induction about lying on a tropical beach. Afterwards, the client admitted that she’d spent the whole time trying to choose which swimsuit to visualise herself wearing.

Regardless of the novel’s title, ‘The Hypnotist’s Love Story’ is not really about hypnotism. It’s more about what hypnosis represents – it’s about relaxing your mind to delve into the subconscious, to induce yourself into remembering (sometimes reliving) moments of your life (or past life) in order to view them with new perspective. And that is the crux of ‘The Hypnotist’s Love Story’.

All of the characters are living in their delusions, unable to break away from how they see the past, and the present. Saskia is the worst of all – a woman who doesn’t like being called a ‘stalker’, but admits (in her first person-narration) that she and Patrick didn’t have a clean-cut end to their relationship, instead it was left to infection and fester … and now she’s stuck in her role as ‘the crazy lady’. As readers we are initially thrown by Saskia, the clearly deluded female stalker. Stalkers are usually men, they’re normally ex-lovers or ex-husbands who are brutal and frightening and don’t know when to stop. Very rarely are stalkers women – unless, of course, we’re talking females who stalk their celebrity crushes in the glitzy land of Hollywood;

‘Where’s the woman’s self-respect?’ snapped Julia. ‘Just move on, for God’s sake. She’s making us all look bad.’ There was a real edge to her voice, as if she was personally offended.
‘You mean she’s making women look bad?’ said Ellen. ‘It’s normally men who do the stalking. It’s good. She’s showing women can stalk just as effectively as men.’

But as the story unravels, and more perspectives are put into the pot, Moriarty does a most curious and wonderful thing – she lets us walk a mile in the stalker’s shoes, and even (for me at least) take her side. We learn of Patrick’s rather harsh treatment of Saskia when their three-year relationship ended. We discover that it wasn’t so much losing Patrick that stung worst of all, but losing Jack – the boy she had helped to raise. But Moriarty delves further still … into Patrick’s badly handled grief over his wife’s passing. The bad timings that wreck relationships worse than infidelity. And the pure pain of ‘just letting go’.

And of course there is Ellen – herself the product of a badly timed coupling that saw her raised by a cutting feminist single mother and two beloved godmothers. Ellen, who is experiencing similar difficulties with Patrick that Saskia must have – particularly where his ex-wife is concerned, Colleen, who sits upon a pedestal in his mind.

Ellen and Saskia do cross paths – unknowingly and cunningly – but it’s when they don’t share scenes that they connect the most. They think about each other, obsess even. Saskia wonders what Ellen has that she didn’t, and she envies her new family with Patrick and Jack. Ellen, meanwhile, is fixated on this woman from Patrick’s past – this woman who is clearly hurt and must have once meant something to him. Ellen even forms an odd little unknowing bond with Saskia, as she commiserates over the ‘wonderful’ and dead Colleen, a woman who must have also stuck in Saskia’s craw for her still importance in Patrick’s love life.

It’s also interesting to read the duality and juxtaposition of Saskia’s envious musings about Ellen, versus Ellen’s less-than-perfect reality with Patrick. Saskia seems to remember her time with Patrick and Jack as being perfect – meanwhile as their relationship develops and grows, Ellen can attest to the less than wonderful aspects of coming into an already-established family.

I loved Liane Moriarty’s ‘The Hypnotist’s Love Story’. It’s a book that looks quite cutesy and deceptively quirky on the surface – pretty front cover, interesting hypnosis topic. But there’s a lot going on below the surface. Moriarty is exploring the complexities and fall-outs of unconventional modern relationships, she is investigating matters of the heart and how we all live a little in our fantasies. ‘The Hypnotist’s Love Story’ does have romance, but more than anything it’s observing the delusions of love, the cling-with-white-knuckles insanity of falling for someone who doesn’t fall back. It’s a beautifully complex novel, coloured in grey and utterly compelling.