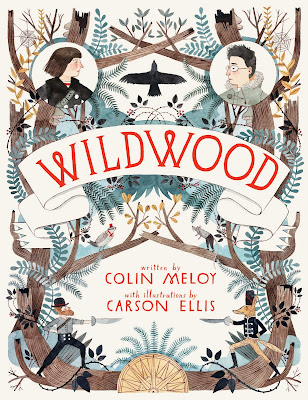 Prue McKeel's life is ordinary. At least until her baby brother is abducted by a murder of crows. And then things get really weird.

You see, on every map of Portland, Oregon, there is a big splotch of green on the edge of the city labeled 'I.W.' This stands for 'Impassable Wilderness.' No one's ever gone in—or at least returned to tell of it.

And this is where the crows take her brother.

So begins an adventure that will take Prue and her friend Curtis deep into the Impassable Wilderness. There they uncover a secret world in the midst of violent upheaval, a world full of warring creatures, peaceable mystics, and powerful figures with the darkest intentions. And what begins as a rescue mission becomes something much bigger as the two friends find themselves entwined in a struggle for the very freedom of this wilderness.

A wilderness the locals call Wildwood.

Prue McKeel’s baby brother has just been abducted by a murder of crows … worse still, the murder have swooped and taken said baby brother into Portland’s Impassable Wilderness.

The Impassable Wilderness (I.W.) is a wooded and dangerous area; nobody who has gone in has ever returned. But with her baby brother at stake, and a geeky classmate called Curtis willing to help, Prue will brave the Wildwood and save her blood …

‘Wildwood’ is the first book in a new children’s trilogy. Written by Colin Meloy (singer/songwriter of ‘The Decembrists’) and illustrated by Carson Ellis. 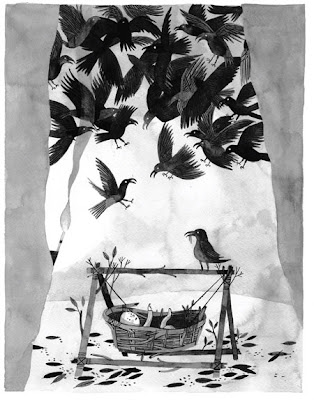 Art copyright © 2011 by Unadoptable Books LLC
I think everyone who has listened to ‘The Decembrists’ and know of Colin Meloy’s haunted and chilling lyrics are going into ‘Wildwood’ like trepid explorers … a lot curious, a little bit fearful but overall hopeful. This is, after all, the man who wrote ‘The Rake’s Song’ – a grotesquely gorgeous tune about a man who kills his three ‘pest’ children after his wife has the good fortune to die in childbirth. Meloy’s lyrics are disarming and charming, mixing beauty with brutishness to create mouth-watering prose that sing like three-minute short stories;

‘Wildwood’ lives up to Meloy’s reputation – combining his penchant for vivid storytelling and word-smithing, with an elaborate fantasy tale, which is actually pitched-perfectly at the younger set (seemingly at odds with Meloy’s preference for dark subject matters). And when combined with Ellis’s adorably evocative drawings, the ‘Wildwood Trilogy’ is sure to go down as a classic.

‘Wildwood’ reminded me of so many old Fairytales and legends. And the book certainly seems to draw on Meloy and Ellis’s childhood fantasizing and remembered daydreaming – but never in a way that feels re-hashed or ripped off. But ‘Wildwood’ is less reminiscent of the sanitized Disney versions, and more along the original lines from the likes of Grimm and Andersen – a lot of dark mixed in with morals and crusading.

The tale reminded me a lot of the 1986 Bowie-extravaganza, ‘Labyrinth’. The connection is obvious, for a girl following her kidnapped baby brother into lands unknown … but the similarities end there. There’s also a boy called Brendan, the King of the Bandits, who is obviously a hark back to J.M. Barrie’s reluctant adult, Peter Pan, who is fiercely independent and original in Meloy’s ‘Wildwood’. The wood is also inhabited by many speaking animals including an Owl King (leader of the Wildwood avian) – who reminded me of the 1982 cartoon ‘The Secret Of NIMH’ (based on the Robert C. O’Brien novel). ‘Wildwood’ is, first and foremost, a Fairytale. The book reads like a classic, and the novel’s villainess, the Dowager Governess, could have been plausibly ripped from a Grimm or Hans Christian Andersen Fairytale for her timelessness and tragedy.

I loved our protagonist, Prue. She’s gutsy and glorious, a whip-quick girl who uses wit and wiles in her Wildwood journey to saving her brother. I especially loved that Prue was a girl – she’s the protagonist mothers will want their daughter to read, and she’s the girl to meet the wishes of anyone who ever fantasized what ‘Harry Potter’ could have been with Hermione in the lead (she’s that cool!).

And, of course, how can I not touch on Wildwood itself – the book’s title and, arguably, most important character. I loved the setting, especially since it’s actually situated in a future Portland (as opposed to a wardrobe wonderland or rabbit hole dimension);

There were no city names here; no network of wandering yellow lines demarking highways and roads. Only vast puddles all shades of green and white and the occasional squiggly blue line linking the myriad remote lakes that peppered the landscape. “There are places in the world where people just don’t end up living. Maybe it’s too cold or there are too many trees or the mountains are too steep to climb. But whatever the reason, no one has thought to build a road there and without roads, there are no houses and without houses, no cities.” He flipped back to the map of Portland and tapped his finger against the spot where “I.W.” was written. “It stands for ‘Impassable Wilderness.’ And that’s just what it is.”

I loved that Wildwood was situated and juxtaposed with reality – it seems to bring a little bit more magic to the tale.

‘Wildwood’ is an impressive new children’s book, and should go down as a modern classic. Amazon lists the reading age to be between 9–12 years (possibly even lower … if read with an adult for hand-holding during some scary battle scenes). But Colin Meloy and Carson Ellis have also come up with an accompanying soundtrack list for the book, which features at least two Led Zeppelin songs – and this should be some indication that ‘Wildwood’ is not just meant for the enjoyment of the younger set. Anyone who has hummed along to one of Meloy’s dark songs will know that they’re in for a treat with his children’s literary foray. In the overgrown and magically overrun landscape of the Wildwood, where a murder of crows ambushes a baby boy and ivy has a taste for blood… Meloy’s wicked melodies and haunting lyrics are actually well suited to a Grimm-esque Fairytale world with a kick-butt heroine whose guts and determination will have you turning the page to keep up with her. Brilliant!