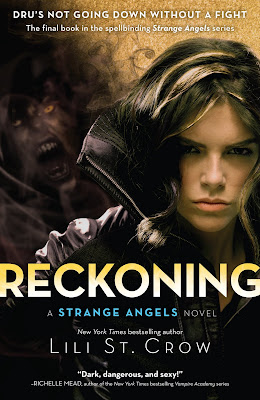 Received from the Publisher
From the BLURB:
This is it.

Sixteen-year-old orphan Dru Anderson has faced down suckers, zombies, and wulfen without flinching. And now that she's bloomed into a full-fledged svetocha, she doesn't even need a gun. But the Real World is still a frightening place . . . and things are about to get ugly. Really ugly.

Dru Anderson has escaped with her life, but she's not out of the woods yet. She's on the lam in a stolen car with her best friend Graves riding shotgun and a Broken wulf named Ash curled up in the backseat. Desperate, Dru heads deep into the Appalachian Mountains to the one place she thinks they'll be safe. But her grandmother's wards and enchantments can't keep Dru's scent from the suckers for long – especially when Dru is betrayed by the one person she trusts most.

It's all come down to this.

ONE battle. ONE choice ONE final sacrifice.

Dru Anderson's not afraid of the dark.

But she should be.

‘Reckoning’ is the fifth and final installment in Lili St. Crow’s helter-skelter paranormal thrill ride, the ‘Strange Angels’ series. We’ve come a long way with Dru, and readers will no doubt be sad to see her go. But fans will find no fault with this crashing finale.

This book comes down to just two people. Yes, fans have been divided into Team Graces and Team Christophe. But ‘Reckoning’ is really and truly all about Dru and her final showdown with Sergej. This is what the finale hinges on – Dru reaping revenge for her mother and father, her lost innocence and all those who were sacrificed along the way. It’s all distilled in one final, epic and bloody battle with Sergej … and it is good. Nail-biting, edge-of-your-seat thrillingly good! Big WARNING; set aside a huge chunk of time to read this book, because once you start you may be physically unable to stop.

The battle also highlights just how far Dru has come. From book one we’ve known that Dru is tough and independent – loyal, almost to a fault, and a butt-kicking heroine not to be messed with. But in the lead-up to her guns-at-dawn final battle with Sergej, we read just how much Dru has grown up. She no longer thinks of herself as a lone entity. In ‘Reckoning’ she is willing to ask for help – to trust and rely on people, to admit that she can’t go it alone. And this leaks into her relationships with two important men in her life, Christophe and Graves.

This is the big draw-card for fans – a love triangle of epically heartfelt proportions. And I refuse to give anything away… except to say that Dru gets very honest in this book, she lays it all out on the line and puts her heart on her sleeve. Fans will be gasping and applauding certain heart-wrenching scenes.

He scooched around a bit, making himself comfortable. His arm tightened, and my nose ended up in his throat. His leg curled over both of mine, and his free hand came up and stroked my tangled hair.
“The only one,” he murmured. His chin dipped a little bit. “You know that, Dru? You’re the only person who’s ever believed in me. You know what that’ll do to a guy?”
What? “I—”
“It makes him want to live up to it.” A sarcastic, bitter little half-laugh, just like the Goth Boy I used to know. The birdlike one who was a little ugly, sure, until you got to know him and saw what had been under the ugly all along. The true beauty.
Sometimes it hides deep, that truth.

Now, as to the ending … if you’ve been reading the reviews of ‘Reckoning’, you should know that the finale is not necessarily a crowd-pleaser. St Crow is not putting a definitive end on Dru and co. (despite this most certainly being the last installment in the ‘Strange Angels’ series). Undoubtedly, the open-ended conclusion will annoy some people. But for me, I liked the little bit of mystery that St Crow leaves readers. I think the infinite ending is a bit indicative of Dru’s life so far, and the overall feel of the ‘Strange Angels’. No journey should end on a definitive full stop. The end of ‘Reckoning’ feels like a befitting conclusion for Dru – like she’s still figuring it all out, taking each day as it comes. And that’s okay – because life is an adventure.