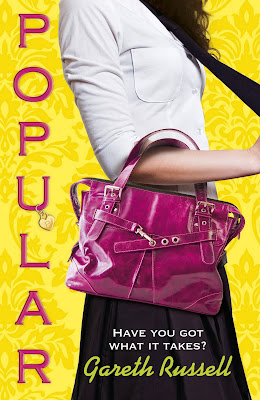 Meredith is rich, popular, manipulative and almost unnaturally beautiful. At the age of sixteen, she's already a social legend.

Imogen, beautiful and sexy-chic, she's Meredith's best friend and a total bombshell. And doesn't she just know it. Then there's . . .

Kerry, daddy's little princess with a passion for pink and a penchant for Fabulous Induced Breakdowns. Now meet . . .

Cameron, six-feet tall, blue-eyed and the most popular guy in school.

Together they're unfathomably gorgeous and, like, totally beau. But under the glamorous surface of parties and spa days is a wealth of comforting lies and convenient silences, bitching, break-ups and scandal. Let the games begin . . .

The first in a fabulously fun new series – you'll love being POPULAR!

Marissa Cooper reigned supreme at The Harbor School. Constance Billard School in NY is ruled with an iron fist by Blair Waldorf. And Mount Olivet Grammar School in Ireland’s Belfast has its own Queenly sovereign in Meredith Harper.

Sixteen-year-old Meredith is popular and beautiful, her father is one of the richest men in Ireland and she is the sole heir to his fortune. Mount Olivet is her court, and Meredith enjoys supremacy along with her minions; Cameron Matthews, Kerry Davison Imogen Dawson and (barely tolerated) Catherine O’Rourke.

But Meredith’s reign is coming under threat and hitting bumpy roads. American import and Zac Efron-lookalike, Blake Hartman, is the new kid on campus and he has got Meredith’s bestie, Cameron, all riled up. Imogen is two-timing her boyfriend, Stewart, with an Immaculate Heart hottie that could end in romantic disaster. Catherine’s boyfriend desperation is reaching sickeningly annoying levels and Kerry has got it into her curly little head that she should take Meredith’s spot as Queen supreme.

But that’s nothing compared to the new levels of aggravation that Meredith’s arch-nemesis, Mark Kingston, is igniting in her soul.

‘Popular’ is the first book in a contemporary Irish YA series from Gareth Russell.

I’ll admit it; I had a very different idea of Ireland before I started reading ‘Popular’. I thought it was all ruined castles, sectarian graffiti and quaint little pubs. The same way I’m sure many people think of Australia as all red deserts and hopping kangaroos, I had a stereotyped idea of Ireland and didn’t really know what sort of interesting shenanigans their teens could get into. . . . oh, was I in for a surprise!

Belfast is a veritable Laguna Beach or New York City, as Russell illustrates and educates. Meredith and her popular posse are all rich little darlings whose parents make up the Belfast elite. They wear Louboutin on their feet, Calvin Klein to school sporting carnivals and Oscar De La Renta to Our Lady of Lourdes fundraisers. They live their lives according to the rules of the Sex and the City boxset, and appear in the Ulster Tatler society pages. Like teens the world over, they obsess over US television and try to live up to the fast lives of fictional American teenagers;

‘I never really liked Blake anyway,’ Imogen said thoughtfully. ‘Too much of a Nate Archibald for my tastes and I’m a Chuck Bass kind of girl.’
‘Thank God for Gossip Girl,’ said Cameron. ‘We haven’t had anything to morally affirm us since Sex and the City.’

I loved reading about the life and times of Irish teens. I especially loved the fact that Russell’s teenagers are neither middle-class ‘Skins’ or spray-tanned O.C. bitches. Russell’s Mount Olivet teens are in a world all their own. There are very different rules of popularity for Irish cliques; attending Mass is a chance to hobnob and being on the Lady of Lourdes fundraiser board is a sign of status. I love, love, loved the fact that ‘Popular’ is about Irish teen cliques – not the typical (and done-to-death) American ‘Mean Girls’ variety. Yes, the characters reference Sex and the City and Gossip Girl, but their lives are decidedly Irish, right down to their religious-laden quips;

‘What are your plans for revision, Imogen?’ asked Cameron, taking another drink of Diet Coke.
‘Saint Jude,’ she replied. ‘Well, I mean, it’s sort of staggered really. I’ll start off with Saint Giuseppe and Saint Thomas Aquinas, but I think in the end it’s all going to come down to Saint Jude.’
‘Oh, he’s very good,’ said Meredith.

Decipher: Saint Jude is the patron saint of lost causes.

Russell’s characters are also delicious dastardly darlings. These teenagers are the richest of the rich, getting their own spreads in the Ulster Tattler and residing in Belfast mansions to rival even the cliff-side residences of Orange County. Fair warning, few characters in ‘Popular’ are redeemable or even likable. Meredith is an Ice Queen who rules by iron fist and double-dealings. Imogen is a pretty girl who knows it, and Kerry is wholly concerned with usurping her best frenemy. These characters are horrendous . . . but Russell writes them with so much panache and ‘OH-MY-GOD!’ antics that they bypass annoying and head straight into horribly entertaining. Like a car crash you can’t look away from, the characters in ‘Popular’ are often times so depraved and annoying that they’re entertainingly fabulous.

Although, there are one or two characters who have kind souls beneath their tough underbelly. Cameron, for instance, is battling his own sexuality when the ‘High School Musical’ lookalike student, Blake, sends his heart fluttering. A good deal of the book concerns Cameron coming to terms with what everyone else has always assumed.

I also loved ‘Popular’ for all the little United Kingdom pop culture references that kept me chuckling along the way (especially when some of my favourite TV shows and movies were mentioned *cough* Marie Antoinette *cough*!);

Moving on quickly, Catherine continued to defend the evening. ‘It’ll be fun, guys, seriously. Let’s just forget the drama for one evening.’
‘Blasphemy,’ hissed Kerry.
‘The only thing we forget are morals and the basic rules of mathematics,’ snapped Imogen. ‘How dare you condemn us to an evening with Belfast’s answer to the Inbetweeners!’

You can tell that ‘Popular’ is just the beginning – the veritable tip of the Mount Olivet iceberg. I can’t wait to read Gareth Russell’s second instalment in this fabulous new series – when Cameron confronts uncomfortable truths, Mark Kingston confesses his true feelings for a certain Ice Queen and Meredith decides how to pull her friend’s strings like the puppet master she is. Fantastic!