'This is Shyness' by Leanne Hall 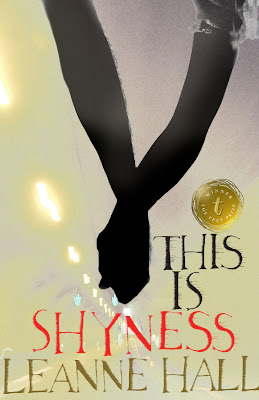 A guy who howls. A girl on a mission to forget.

In the suburb of Shyness, where the sun doesn’t rise and the border crackles with a strange energy, Wolfboy meets a stranger at the Diabetic Hotel. She tells him her name is Wildgirl, and she dares him to be her guide through the endless night.

But then they are mugged by the sugar-crazed Kidds. And what plays out is moving, reckless...dangerous. There are things that can only be said in the dark. And one long night is time enough to change your life.

She meets him in the suburb of Shyness, at the Diabetic Hotel. He’s a hairy cowboy, all swagger and intensity. He howls upon meeting her, and calls himself ‘Wolfboy’. The words emblazoned across her chest earn her the nickname ‘Wildgirl’.

They have one night together, in the suburb of Shyness where it’s darkness all the time, and the sun hasn’t made an appearance in three years.

Sometimes, one night is all you need.

Leanne Hall won the Text Prize in 2009 for her debut young adult novel, ‘This is Shyness’ which was published in 2010.

I’ll admit it; I was thoroughly confused by the blurb. Considering how popular the YA paranormal genre is, I saw the name ‘Wolfboy’ and instantly thought ‘werewolf’. Coupled with the strange mention of a suburb in darkness . . . I really had no idea what I was getting into when I cracked this book open (and that was half the fun).

‘This is Shyness’ is a blend of realism, speculative fiction and urban fantasy. Leanne Hall is writing two fragile, lonely characters and exploring their delicate psyche’s in a blackened suburb full of dreamers, sugar-trippers and pink ukuleles.

Wildgirl lives in a housing complex near Shyness, with her single mother. She dreams of the day when she can skip town and never look back. Wolfboy resides in his parent’s decrepit mansion, full of memories and ghosts that he can’t ever forget . . . and so, he howls;

I howl.
I howl at the roof like a hotted-up bomb doing donuts, full of screeches. I howl like an air-raid siren, my arms stretched out wide. Howls are like songs. They can’t be summoned; they just happen. They come from a place that I barely understand. And then something else climbs to the surface, something black and jagged, something from the deep. Imagine all your worst feelings surfacing. Imagine coughing up razor blades. Imagine not being able to stop the pain from coming out, and not knowing when it’s going to end.

Wildgirl and Wolfboy’s problems are real. They stem from a broken family, unknown father and school bullying. The Wild and the Wolf are living real pains, and it’s only Shyness that is fantastical and strange.

Shyness turned dark three years ago, and hasn’t seen light since. It’s an anomaly that has sparked rumours of Armageddon and government conspiracies. The darkness has, understandably, had an odd effect on the residents of Shyness – there are those who keep dreaming, never sure when day begins and nights ends, so they remain happily ensconced in dreamland. Shyness residents are pale and anaemic-looking, like walking ghosts. Doctor Gregory’s face appears on billboards all over Shyness – promising personal cures for the darkness, and remedies for coping with the night. Businesses have closed up and moved into the daylight, so parts of Shyness are abandoned and dead.

But by far the strangest product of the darkness is ‘The Kidds’. KIDDS RUSH IN is tagged all around Shyness, and people are scared of these young no-hopers. The Kidds are hooked on sugar; they have trained monkey-like creatures called tarsiers to sniff out the good stuff . . . wizz-fizz would send these children into the stratosphere! The Kidds who roam Shyness reminded me of the 1979 urban wasteland movie ‘The Warriors’, for all the street tribes and bizarre gang wars. They’re odd, to be sure, but fascinatingly so.

When Wolfboy and Wildgirl get on the bad side of the Kidds, they have to venture into their housing complex haven to retrieve something that was stolen . . .

‘This is Shyness’ is a beautifully strange novel. The darkness reflects the minds of Wildboy and Wolfgirl, who are each dealing with personal catastrophe. This certainly isn’t your typical Aussie YA novel – and I kind of love that. Hall is pushing the boundaries of urban fantasy by bending speculation and realism to her narrative in order to explore personal tragedy through physical manifestation. It sounds all big, scary and literary . . . but the beauty of Hall’s novel is that it’s also wonderfully entertaining. Reader’s get caught up in Wolfboy and Wildgirl’s dance of attraction, and their slowly revealed pasts which come to reflect the darkness that is Shyness. A truly magnificent debut novel from an interesting new voice in Australian YA.