'The Fault in Our Stars' by John Green 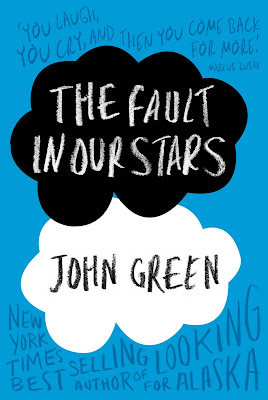 Despite the tumour-shrinking medical miracle that has bought her a few years, Hazel has never been anything but terminal, her final chapter inscribed upon diagnosis. But when a gorgeous plot twist named Augustus Waters suddenly appears at Cancer Kid Support Group, Hazel's story is about to be completely rewritten.

Insightful, bold, irreverent, and raw, The Fault in Our Stars is award-winning author John Green's most ambitious and heartbreaking work yet, brilliantly exploring the funny, thrilling, and tragic business of being alive and in love.

Hazel Grace has cancer of the terminal variety. There is no cure, no getting better and no chance of survival. But a drug called Phalanxifor is helping to prolong her fight, even if it isn’t curing the build-up of fluid that creaks her lungs.

Hazel’s mum and dad know what a blessing it is to have her with them for just a little while longer. But her lengthened life won’t mean much if she doesn’t get up off her butt and do something with it. So they send her into the Literal Heart of Jesus (architecturally speaking) – to a cancer support group where people talk and cry, praise the battle-weary cancer kids and repeat stories about losing their testicles to the big-C. It’s a hoot.

And then one day, while sitting around discussing a cancer survivor’s current state of ball-lessness, Augustus Waters walks in, and everything changes.

Augustus Waters is currently in remission, minus one leg courtesy of the cancer monster. Augustus has stared death in the face, and laughed heartily . . . and now he continues to chortle. He sticks cigarettes in his mouth but doesn’t smoke them. He is a terrible driver. His best friend is about to be blind, and he falls irrevocably and stupidly in love with Hazel pretty much at first sight.

But Hazel is reluctant. Augustus has already lost so much to cancer, and she doesn’t want to be another grenade in his life (sure to wound) . . . so she tries to resist his crooked smile and general hotness. Just friends, okay?

‘The Fault in Our Stars’ is the new contemporary YA book from astronomically popular Edgar & Printz winning author, John Green.

Brace yourselves. John Green’s newest book is a love story starring two cancer-ridden teenagers. Yes, it’s sad. Yes, it’s actually so sad you will blubber while reading and be all snotty by the last page. Expect great big gulping, hiccupping tears. The embarrassing kind. The kind you don’t want to shed on public transport. You have been warned.

That being said . . . this is a John Green novel, so it’s totally worth your crying, blubbering, hiccupping, snotting tears. Truth be told, ‘The Fault in Our Stars’ is down-right magnificent.

Our narrator is Hazel Grace Lancaster – terminally ill ‘cancer kid’ whose mortal coil has been somewhat lengthened thanks to a (minor) miracle drug. But Hazel has been sick for so long that she doesn’t exactly know how to be normal and just live. She’s only sixteen but attending college, having surpassed her classmates studying by herself while being cooped up indoors. She’s a quick-witted firecracker of a girl who has side-stepped the brink of death only to become a terminal couch-potato (addicted to ‘America’s Next Top Model’). Her mother, and full-time carer, wants to see Hazel interact with the world. Hence, Cancer Support Group in the Literal Heart of Jesus. Hence, meeting Augustus Waters. Hence inconveniently falling for a cancer survivor who she is bound to hurt and maim when the death-knock sounds for her.

The fault, dear Brutus, is not in our stars,
But in ourselves, that we are underlings.

Hazel and Augustus grow closer (despite her reservations) when she shares an important part of herself with him in the form of her favourite book, Peter Van Houten’s ‘An Imperial Affliction’. A book famous for ending abruptly, and somewhat incompletely, about a cancer girl and her glass-eyed mother who falls for a rich Tulip Man. But the abrupt ending plagues Hazel, and then Augustus. Peter Van Houten has not written another word in seven years, and has no plans of writing a sequel or answering fan-mail.

I loved the story behind ‘An Imperial Affliction’, mainly because it felt like Green putting a little tiny bit of himself in his book – a bit of life imitating art. John Green’s first novel was ‘Looking for Alaska’ – a Printz-award winning book that beguiled and surely frustrated many teen readers. Frustrated, because there’s a rather crushing death in the book that is never fully explained. No definitive reason is given for a beloved character’s passing, and I have read reviews in which people cursed and lamented the lack of resolution at the end of ‘Alaska’ (despite the fact that there’s truth in the not knowing). In ‘Fault’, Hazel and Augustus wrack their brains over the abrupt mid-sentence ending of ‘An Imperial Affliction’ – which hints at the protagonist’s death, but never confirms it. They become obsessed with the idea of getting the answers from the author, Van Houten himself.

I loved this story-within-a-story. It feels like John Green speaking rather directly and affectionately to his readers (but it should be noted that Green couldn’t be further from the Van Houten character). Through Hazel’s obsession with ‘An Imperial Affliction’, Green assures readers that he understands how important fictional characters can be . . . that they have a life of their own within reader’s hearts and minds, and that the author has a certain ‘contract’ to fulfil with the reader by letting them walk into our lives and consume us for a little while. And consume us they do, such is the case with Hazel and Augustus . . .

These characters will get to you. You’ll wish that they are real people you can hang out with, talk to them and try to keep up with their whip-quick comebacks and banter. You will love them. Augustus is sweet and earnest, a perpetual optimist who goes after Hazel with everything he has. He and Hazel are a riot together – bouncing off each other beautifully, able to sway between deep metaphorical musings and laugh-out-loud repartee. They’re both a little bit brilliant. Which is why reading their doomed star-crossed love hurts so much (and will induce aforementioned snotty blubbering);

I would probably never again see the ocean from thirty thousand feet above, so far up that you can’t make out the waves or any boats, so that the ocean is a great and endless monolith. I could imagine it. I could remember it. But I couldn’t see it again, and it occurred to me that the voracious ambition of humans is never sated by dreams coming true, because there is always the thought that everything might be done better and again.

Something I especially love about John Green novels is the abundance of quotable quotes. I come away from a Green reading with many curious thoughts and ideas to turn over in my mind. And since the themes and topics in ‘Fault’ are so expansive - hopeful and morbid, set on epic life-or-death scales - the book is full of heartfelt reflections and pin-point accuracies.

It seemed like forever ago, like we’d had this brief but still infinite forever. Some infinities are bigger than other infinities.

Nobody should be surprised to learn that ‘The Fault in Our Stars’ is simply sublime (as we all knew it would be). John Green is exploring a deathly disease with gallows humour and infinite tenderness. It’s a total cliché, but you will laugh and you will cry. And by the end of the book you’ll feel a little bit bruised and battered, tender and exposed. But Hazel and Augustus will stay with you for a long while after reading, John Green having fulfilled his promise to the reader that these characters matter; they have weight and substance, and they will not be easily forgotten. You will feel lucky for having read about them.

Email ThisBlogThis!Share to TwitterShare to FacebookShare to Pinterest
Labels: John Green, YA