'The Last Letter From Your Lover' by Jojo Moyes 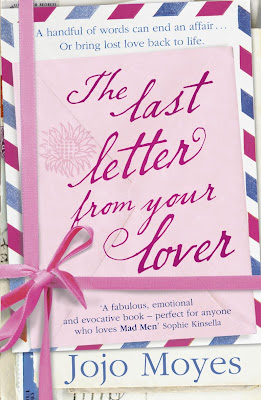 When journalist Ellie looks through her newspaper's archives for a story, she doesn't think she'll find anything of interest. Instead she discovers a letter from 1960, written by a man asking his lover to leave her husband - and Ellie is caught up in the intrigue of a past love affair. Despite, or perhaps because of her own romantic entanglements with a married man.

In 1960, Jennifer wakes up in hospital after a car accident. She can't remember anything - her husband, her friends, who she used to be. And then, when she returns home, she uncovers a hidden letter, and begins to remember the lover she was willing to risk everything for.

Ellie and Jennifer's stories of passion, adultery and loss are wound together in this richly emotive novel - interspersed with real 'last letters'.

It’s 2003 and Ellie Haworth is turning 32 but finds herself floundering. Her affair with a famous, married, author has turned her life upside down and sent her career into a tumult. Ellie waits by the phone for measly text messages, she ignores her friend’s disgruntled and disapproving looks, sleepless nights and snatched moments are impacting on her work as features reporter for The Nation. She needs a big article, a retro look at love ‘now and then’. And just when Ellie thinks she’s all out of ideas, a trip to the basement archives reveals a mysterious letter hidden amongst the stacks… a letter, in which the writer begs the recipient to leave her husband and run away with him, dated 1960…

It’s 1960 and Jennifer Stirling has been in a car crash. She has little memory of the events surrounding the accident, or even who she is. The nurses tell her she is wife of asbestos entrepreneur, Laurence Stirling. They live in a London townhouse, have no children, but frequent the Riviera. They live an affluent, comfortable life. But upon Jennifer’s return home from the hospital, she cannot shake an odd feeling. A sense that this is not the life she is meant to be living.

The discovery of a love letter, tucked into the pages of a trashy romance novel, spark Jennifer’s curiosity … they are letters addressed to her, from a mysterious “B”, and they are so full of love and wanting that Jennifer finds herself falling in love with the writer. As she investigates the many letters she stashed around the house, Jennifer unfurls a romance between herself and a mystery man she cannot remember.

Running alongside Jennifer’s investigations into her mystery love affair, is the remembered disastrous meeting between her and journalist, Anthony O’Hare, which took place some time before her car crash. Anthony is an alcoholic foreign correspondent, disgraced after a near-death job in Africa. He meets the Stirling’s when he is invited to the Riviera with them, to write a feature article (fluff piece) on Laurence’s asbestos empire. While there Anthony makes a fool of himself and embarrasses Mrs Stirling…

All of these stories converge and orbit around one epic romance, between Jennifer and her mysterious “B”. The mystery is reignited in 2003, but back-tracks through 1960’s London and a disastrous affair of near-misses and lost chances…

Jojo Moyes’s ‘The Last Letter From Your Lover’ was the 2011 ‘RNA's Romantic Novel of the Year Award’ in the UK.

I have done things a little backwards. I kept hearing and reading about ‘The Last Letter’ throughout 2010/11… but it wasn’t until I recently read Moyes’s latest book ‘Me Before You’ that I was impressed enough to back-track and read her most popular novel, second. I loved ‘Me Before You’, and decided that Moyes was a pretty special writer… but now having read ‘The Last Letter From Your Lover’, I am absolutely smitten with her.

‘The Last Letter’ is simply sublime. It’s a modern-day romance that reads like a classic black and white movie. Think Rick & Ilsa in ‘Casablanca’, their doomed “we’ll always have Paris” romance. Imagine the elegance of Grace Kelly or the fraught tensions of ‘The English Patient’, mixed with Bendrix’s consuming madness in ‘The End of the Affair’. Moyes’s novel is just that kind of classic, the romance reads like one of those divinely painful romances of yesteryear – and while reading I was picturing ‘Bogey’ in the role of dashing “B”, playing opposite his golden-haired muse, Lauren Bacall.

The novel begins in 2003, with Ellie Haworth finding herself in a predicament. She is in love with a married man, but the unreality and undefined edges of their romance is sending her a little crazy. Her friends are sick of hearing about her plight of missing John, her lover, when he insists on spending time with his family. Rightfully so, her friends are starting to ask uncomfortable questions of Ellie after she hits the 1-year mark with her married lover … is she thinking of his wife and two small children? Does he intend to leave his wife? Is Ellie too old to be decoding cryptic text messages and dropping everything when he can spare her an hour or two? Ellie’s job is particularly suffering, and she needs a brilliant feature to get back in her editor’s good books. And then she discovers, completely by chanced fate, an old 1960’s love letter mixed amongst papers in the library. A love letter imploring a mysterious woman to leave her husband. Ellie is intrigued and needs a story, so she searches …

The novel then backtracks to 1960’s London and the life of Jennifer Stirling. Jennifer’s omniscient narrative is split in two – before her car accident, and after. ‘Before’ takes us through her disastrous meeting of a disgraced foreign correspondent, Anthony O’Hare, who is writing a fluff piece on her husband. One night Jennifer overhears Anthony calling her a privileged good-for-nothing ‘tai-tai’ … a bout of name-calling bought on by Anthony’s heavy drinking and bitterness at being down-graded in his newspaper. To make it up to her, Anthony takes Mrs Stirling on a lunch date. The two spend days together, talking and chatting and revealing uncomfortable truths about one another. Anthony admits he is a cruel drunk, bitter because his ex-wife does not let him visit his son often, and his career is in shambles after a disastrous turn in Africa. He frequently steals other men’s wives, and doesn’t like himself enough to stop drinking. Jennifer, meanwhile, was raised to be beautiful and little else. Her husband, Laurence, expects little of her other than to keep her mouth shut and look pretty.

But as the two spend time together, talk and reveal truths about themselves, something happens. Jennifer is encouraged and challenged by Anthony, to use her mind and sharp wit. Because of Jennifer, Anthony wants to be a better man.

'I'm afraid of what I feel for you. I'm afraid to love somebody this much.' Her voice broke. She folded her cocktail napkin, twisting it between her slim fingers. 'I love him, but not like this. I've been fond of him and I've despised him, and much of the time we exist reasonably well together and I've made my accommodations and I know I can live like this. Do you understand? I know I can live like this for the rest of my life and it won't be so bad. Plenty of women have worse.'
'And with me?'
She didn't answer for so long that he almost repeated the question. 'If I let myself love you it would consume me. There would be nothing but you. I would be constantly afraid that you might change your mind. And then, if you did, I would die.'

Jennifer’s ‘after’ concerns the car accident, which has left parts of her memory blank. She does not remember much of her life with Laurence, but knows there is some rift between them. And she cannot shake a feeling that something is missing. The discovery of heartfelt and burning love letters from an unremembered “B” ignites Jennifer’s passion, and her determination to find her lost love.

Yes, the romance is criss-crossing, hair-raisingly complex. The narrative swoops and weaves through Jennifer’s hazy memories; interchanging between her searing romance and then ebbing back to her time as an unhappily married society darling. The narrative does, eventually, return to 2003 where Ellie’s investigations into the love letter of PO Box 13 have uncovered some interesting finds…

Moyes’s novel is beautifully crafted, and this is one of the best-paced books I have ever read. Moyes writes her love story mystery with enviable slight of hands and plotted curveballs. She employs red-herrings and chapter cliff-hangers that will keep you reading well into the night … she takes readers through the affluence of high society London, then the ever-changing swinging-60’s to come out into modern day, all while wrapped around the extramarital affair of two unlikely people.

Interspersed with Ellie’s investigations and Jennifer’s searing love affair are some gut-wrenching ‘real life’ last love letters. In her ‘acknowledgements’ page, Moyes says she gathered these after a ‘call to arms’ to her friends and the online community. Each chapter begins with the excerpt of a last love letter – and they are all authentic. Moyes has collected last send-offs from Jeanette Winterson, she includes one between Zelda and her husband, F. Scott Fitzgerald. There are newer goodbyes (lots of painfully abrupt Facebook, text and email messages), as well as some old heartbreaking letters that still sting, despite their age;

I will say that in the novel, Ellie Haworth is rather a tough character to like. But she’s meant to be. Ellie is the corrosive opposite of Jennifer’s truly heartfelt betrayal with a man she loved. Ellie is, unfortunately, a bit of a modern girl with modern sensibilities. She wants it all – the perfect job, adoring boyfriend, fabulous friends … and she wants it before she hits 40. She’s a little bit selfish and narcissistic. The polar opposite of Jennifer who had old-school sensibilities – but in this too, Moyes points out the problems. Feminism doesn’t count for a lot, and Jennifer remains downtrodden rather than speak her mind to Laurence. But I actually came to rather like my frustrations with the characters, and how Moyes presents them as neither good nor bad, just capable of making disastrous mistakes. It’s also why I liked Anthony O’Hare – not at all your typical romance hero, but rather a drunk and bitter reporter, who surprises readers with his path to redemption. Moyes’s prickly and difficult characters are a reflection of the ultimate conundrum in ‘The Last Letter’… about affairs and betrayal, love and loss. Sometimes people make mistakes, following your heart can sometimes lead you astray and love does not necessarily justify bad behaviour. We are all capable of mistakes, particularly in matters of the heart. It’s what you do in the aftermath that counts.

Jojo Moyes’s ‘The Last Letter From Your Lover’ is simply sublime. This is one of those romances that everyone who enjoys the genre simply must read. But it’s also one of those books for people not-so-keen on the schmaltzy stuff … with a wonderfully atmospheric London setting, grey characters and a twisting mystery at its heart, ‘The Last Letter’ is simply a must-read book.