'Then Came You' by Jennifer Weiner 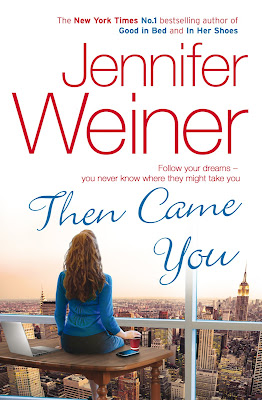 Jules Wildgren is a 21-year-old Princeton college student with a full scholarship and a family she's ashamed to invite to Parents' Weekend. Tall, blonde, and outwardly identical to her wealthy classmates, her plan is to take the 10,000 dollars she'll receive from donating her 'pedigree' eggs and try to save her father from addiction.

Amie Barrow is a 34-year-old married mother of two who scrapes by on her family's single paycheck.After watching a TV show about surrogates, she thinks she's found a way to recover a sense of purpose and bring in some extra cash.

India Bishop, 38 years old (really 43), believes she's found her happy-ever-after when she marries a wealthy and much older man, Marcus Croft, but decides that a baby will seal the deal. When all of her attempts at pregnancy fail, she turns to technology - and Annie and Jules - to help make her dreams come true.

But each woman's plans are thrown into disarray when Marcus suddenly dies, and his 23-year-old daughter, Bettina, is named guardian of India's unborn child. As the baby's due date draws near, these four women - with nothing and everything in common - discover what makes each of them a mother in her own right.

The old saying ‘it takes a village to raise a child’ has never been truer than in this day and age. Although it’s not so much ‘raising’ but the ‘conceiving’ that can now take upwards of three people, as four women are about to discover. . .

There’s the egg-donor, Jules, an attractive college student who wants to put the $20,000 towards her father’s drug rehabilitation.

Annie is a stay-at-home mother of two, with a husband working two jobs and studying at night. Though only twenty-four, she already knows the many woes of scrimping and saving, so she sees offering up her womb to a paying couple as not only a great way to make money, but a way to put her best credential (being pregnant) to good use.

India is a chameleon. She’s been botoxed, tucked, pumped and injected to within an inch of her 43-years (though 38, if anyone asks). Now she has scored herself one of New York’s wealthiest older gentlemen, Marcus Croft, and she wants a family – in part, because of the cosy prenup she’ll get for having one of Marcus’s children, but also because she wants to feel more like a family unit with the man she has (unexpectedly) come to love and care for.

Bettina is India’s sceptical step-daughter. Her mother ran off to a Mexico Ashram with her younger yoga instructor lover, and for years her father was the butt of newspaper column jokes and society sympathy. Now he has India, and he seems happy. But a little digging reveals that India is no more real than her double-D’s, and her father may be being taken for a ride . . . throw a baby into the mix, and India will get double the money and sink her claws even further into Bettina’s beloved father.

One egg donor.
One Surrogate.
One paying mother.
One baby.
Four women.

‘Then Came You’ is the new novel by best-selling author, Jennifer Weiner.

In 2007 a Marie Claire article by Abigail Haworth came out, titled ‘Surrogate Mothers: Womb for Rent’. After reading in glossy magazines about the celebrity mothers who used surrogates, and the feel-good stories about gay couples able to conceive, Haworth’s article was a disturbing revelation. She researched the growing trend of ‘reproductive tourism’, in which would-be Western parents use Indian surrogates to carry their children (for a number of financial and legal reasons). This article was a very different viewpoint about surrogacy and the scientific miracles of in vitro fertilization – because Haworth presented this ‘miracle’ as a business transaction, yet another commodity for Western parents to outsource and export. Understandably, the article was a water-cooler topic. And now, best-selling author Jennifer Weiner (of ‘In Her Shoes’ fame) is tackling the surrogacy issues from multiple angles. . .

In ‘Then Came You’, Weiner offers up four different viewpoints, which are at first disjointed and superficially related. Annie and her husband, Frank, are struggling to keep up payments on their sprawling farm house where they dreamed of raising their big family. . . and then the recession hit. Now Frank is working round the clock and Annie, as a stay at home mum, feels like she isn’t contributing much to their struggling finances. When she hears about a surrogacy program (which offers women, minimum, $50,000 to carry someone else’s baby) she starts to formulate a plan. . .

Jules is an attractive college student who has never felt comfortable in her beautiful body. But when a stranger suggests she look into egg donation (and get herself a nice nest egg of $20,000 in the process) she instantly thinks of her drug-addicted father, and how that money could get him into a decent rehab facility. . .

Then there are the other two women, Bettina and India, who are connected by Bettina’s father, Marcus Croft, who also happens to be India’s new husband. These two float on the periphery of reader’s minds for a few chapters, unsure of where they fit into the grand scheme of things. India, having snagged the wealthy New York businessman, decides she wants to have a child with him. Unable to conceive at the age of 43, she and Marcus decide to use a surrogate and egg-donor . . . enter, Annie and Jules. Meanwhile, Bettina grows suspicious of India’s motives for wanting a child so late in life, and does some investigating, which produces alarming skeletons in India’s closet.

Weiner looks at surrogacy from a very different viewpoint in ‘Then Came You’. She could have gone a different route with this story – making the ‘barren’ parents into a gay couple, for instance. Instead she has botox-beauty, India, as the mummy-wannabe. And, it’s fair to say, India is not likable. We get chapters from each character’s point-of-view, and India doesn’t kid herself for one second that she’s interested in Marcus Croft beyond his bank balance and penthouse apartment;

He was fifty-five. That was older than I thought, but I could work with it. I figured that, barring an early and lucrative divorce, we could be man and wife for twenty years, and if he was considerate and didn’t linger, I'd have plenty of years to be a very merry widow.

Bettina is partially right in assuming that India wants a baby with Marcus to double her prenup payout if he should die or they divorce.

Likewise, Jules and Annie aren’t donating their eggs and wombs for completely moral and self-sacrifcing reasons. They are also motivated by money – Annie, for the home renovations and new clothes that $50,000 could buy, and Jules for the (slightly more) moral reason of getting her dad into rehab. Some readers may be aghast that Weiner is writing about surrogacy from a ‘grasping’ and greedy perspective. But, honestly, this is fairly realistic.

Surrogacy has become an industry just like any other; based around supply and demand. When science has stepped in and made having a baby easier than ever (provided you have the $$$) it’s no wonder that people’s motivations for entering into the programs have likewise become fueled by the green stuff.

I will admit, when so much of ‘Then Came You’ is based around monetary gains and less-than-altruistic reasons for bringing a baby into this world, I did begin to become a little disillusioned with the book. Weiner has a fairly bleak outlook on the whole baby-making machine that is surrogacy. And like I said, this would be a very different story if India and Marcus were a young gay couple hoping to conceive with a surrogate. But, actually, Weiner’s viewpoint is probably in the minority – and the themes and circumstances she’s exploring in ‘Then Came You’ are important to the debate on science and modern parenting.

I did grow to like the characters in the book. Annie, in particular, was a favourite. She has a very Midwestern viewpoint on love, marriage and family. She didn’t go to college, and abides by the rule that her husband wants dinner on the table promptly at four o’clock every evening. She likes to read, and once upon a time a sweet college boy she worked with encouraged her to read literary greats and modern classics, pushing herself to understand and appreciate them. But then her husband, Frank, but a stop to all that. But her husband isn’t tyrannical or abusive – they have a very sweet, tender romance that reads true. It’s just that Annie has never expected more for herself. I really liked this character, and thought she had the best (and clearest) evolution of any character in the book. I particularly liked her insights into the surrogacy program, when she was looking to be picked by a prospective parent and her worries about truthfulness on the surrogacy questionnaire form;

I'd been torn about dieting. On the one hand, maybe infertile women would want their surrogate to look robust and healthy, with broad shoulders and wide hips that evoked peasants in the field, squatting to give birth without missing a swing of their scythes. Then again, rich people hated fat people, maybe because they thought that being fat was the same as being lazy, or they were afraid of becoming fat themselves.

I liked Annie, and Jules also grew on me. As the novel progresses, Jules grapples with her awakening sexuality and sexual orientation. But bigger than that are her problems with her drug-addicted father. Jules’s scenes had me blubbering, and she was another interesting layer to this complex issue.

I had more of an issue with Bettina and India. It doesn’t help matters that both of these women are wealthy New Yorkers (one inherits her fortune, the other marries into it). I disliked Bettina immensely in the beginning (poor little rich girl), but as the novel progressed I came to understand and even like her character. She talks about her mother abandoning the family, and her father’s depression in the wake of divorce. But more importantly she reveals her own insecurities about people only liking her for her money (much the same way she suspects India only married her father for his fortune. . . )

India, on the other hand, I never grew to like. No matter how much sad backstory Weiner wrote for her, I just could not see beyond India’s botox and brow-lift. Sorry, I disliked her from beginning to end (and because of that, parts of the book were soured).

Jennifer Weiner is writing about a modern medical miracle from a very different viewpoint. She excels in writing between the lines, in the gray areas of ethics and moral conundrums. Regardless of what you feel about the characters (and their motivations) in ‘Then Came You’, this will nonetheless be a book to get you talking and thinking about ‘wombs for rent’.