'Queen of the Night' by Leanne Hall 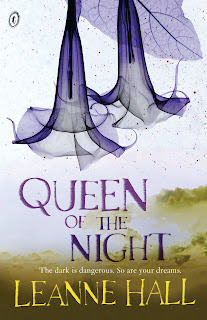 The dark is dangerous. So is the past. So are your dreams.

For six months Nia—Wildgirl—has tried to forget Wolfboy, the mysterious boy she spent one night with in Shyness—the boy who said he’d call but didn’t.

Then Wolfboy calls. The things he tells her pull her back to the suburb of Shyness, where the sun doesn’t rise and dreams and reality are difficult to separate. There, Doctor Gregory has seemingly disappeared, the Darkness is changing and Wolfboy’s friend is in trouble. And Nia decides to become Wildgirl once more.

Six months is not enough time to forget someone. Not when you spent one memorable, hell-raising night with them in an impossible town of darkness chasing tarsiers and playing on a pink ukulele. But that’s just what Nia has been trying to do, ever since she left Wolfboy sleeping in his bed as she slipped out of Shyness…

Six months later and Wolfboy (aka ‘Jethro’) never called Nia (alias ‘Wildgirl’) after their hedonistic night. So Nia moved on. She went back to her dull Panwood life, and tried to forget about the beautiful howling boy.  She took a job at vintage clothing shop, Emporium, and changed schools. She kissed a new boy and made firm friends with her two Emporium colleagues, Helen & Ruth.

And then Ortolan walks into Emporium, and Nia is thrown back into Shyness and obsessing over Wolfboy.

Meanwhile, in the suburb of darkness, Jethro has been nursing his hurt after a failed reconnection with beautiful Wildgirl, Nia. He has been spending time with his niece, Diana, and helping out her mother, Ortolan. But he can’t stop thinking about Nia, and what could have been.

Jethro’s daydreams are interrupted though, when his best friend and ‘The Long Blinks’ band mate, Paul, starts acting strangely. He’s gaunt and distant, disappearing for nights on end and tight-lipped about his ex-girlfriend. Jethro starts noticing similarly odd behaviour around Shyness, from the ‘blue people’, and when Dr. Gregory redoubles his efforts to contact him, Jethro knows it’s time to ask for help from the one girl he can trust …

‘Queen of the Night’ is the sequel to the 2009 Text Prize-winning novel ‘This Is Shyness’, by Leanne Hall.

I absolutely, positively adored ‘This is Shyness’ – a crazily beautiful novel about two lost souls finding each other in the darkness of Shyness. So I was thrilled to learn that Leanne Hall was releasing a follow-up to her 2010 debut, and I was doubly-excited when an advance copy of ‘Queen of the Night’ landed in my mailbox.

Some people may have been surprised to learn of a follow-up to ‘This is Shyness’. Admittedly, it read beautifully as a stand-alone, and even its open-endedness suited the dreamscape of the story, giving it that extra little dash of magical realism, with hope on the precipice – when Wildgirl left her howling Wolfboy asleep in his bed, as she walked home and into daylight. But fans should quickly dispel any lingering doubts that Wolfboy and Wildgirl’s story ended there, as Hall takes us back to the darkness of Shyness, and explores what happened after ‘happily ever after’…

When ‘Queen of the Night’ begins (six months after the events of ‘This is Shyness’), Nia and Jethro only allow themselves fleeting thoughts of that night and each other as Wolfboy and Wildgirl. Both are nursing their wounds from the fallout of that night, while also glorying in their gains. For Jethro, Nia’s insistence that he get to know his niece, Diana, and her mother Ortolan, despite the hurt left over from his brother’s death, has seen him gain a family. Jethro also opened his home to Blake, an ex-Kidd sugar junkie who has turned her life around since leaving Orphanville. Jethro became a babysitter and gained a roommate, and now he doesn’t feel quite so alone in the darkness.

Nia, meanwhile, has an improved relationship with her mother. It helps that Nia’s mum is now attending night school, and that Nia left her old, hated, school behind… she has found a creative outlet at the Emporium vintage clothing store, and has gained two wacky lovely friends in Ruth and Helen, shop assistant and owner of the store.

But even with all these changes for the better, neither Jethro nor Nia can quite shake the feeling of something unfinished, a loose thread that needs tying. And Nia especially cannot shake the bitterness she feels after having had such sweet expectations of her Wolfboy;

I thought we would be more. I wouldn’t have said that about an ordinary one-night hook-up, but nothing about that night was ordinary. Not meeting Wolfboy, not getting mugged by the Kidds, not breaking into Orphanville to get his brother’s lighter back, not the rooftop showdown with the creepy Doctor Gregory. Not the feeling that we were just two stars in the endless night sky, as dazzling and dwarfed and stupendous and insignificant as that made us. I let my guard down with Wolfboy, and I think he did the same with me. I like to think that I’m a good judge of people, but I guess I’m not.

But pretty soon Shyness finds a way of throwing these two together again … Nia bumps into Ortolan, who frequents the Emporium, and an intriguing conversation with her about Jethro fans Nia’s curiosity about what Wolfboy is up to now.

Meanwhile, Jethro’s best friend and band mate, Paul, has succumbed to the ‘blue people’. Appearing like Shyness dreamers at first, Jethro has cause for concern when he crosses paths with Dr. Gregory again, and a mysterious ‘darchitect’ takes an unusual interest in Ortolan and Diana’s apartment. Too many coincidences and bad feelings forces Jethro to reach out to the one person he promised himself he’d forget.

‘This is Shyness’ was a beautiful tale compressed into one night; a night in which Jethro and Nia, Wolfboy and Wildgirl, used the dark cloak of a Shyness night to find themselves and help each other. In ‘Queen of the Night’, Leanne Hall is exploring what comes next. What happens when you wake from the dream into reality, and all is not as you dreamed it would be.

‘Queen’ stretches beyond a single night, giving Jethro and Nia days of normality to reacquaint themselves with one another, and be together in the ‘real world’. A good portion of the book takes place outside of Shyness, in the daylight suburb of Panwood. If ‘This is Shyness’ was the dream – a fantastical blend of real and imagined, skating the genres of speculative fiction and urban fantasy, then ‘Queen of the Night’ is a wake-up call. Indeed, some of ‘Queen’ reads like the blurred edges of an ungraspable dream – just the wisp of remembrance. Hall moves readers between Shyness and Panwood, juxtaposing Jethro’s life in Shyness (complete with tarsiers, Kidds and looming Dr. Gregory) with Nia’s normality (school, work at the Emporium, conversations with her means-well mum).

‘Queen of the Night’ also serves to expand Shyness. In the first novel Hall took readers on a curving adventure around the dark town’s landmarks – the Diabetic hotel, Orphanville and Jethro’s abandoned home. ‘Queen’ is more about exploring the history of Shyness, and its magic too. Jethro discovers a curious book about the town’s history, SHYNESS: A young lady’s treatise by Delilah Gregory, and Jethro starts to wonder about the years of unexplained darkness. And the big question, will the darkness recede? Jethro’s investigations also lead him and Nia to the ‘blue people’ – not-quite-dreamers who seem to be in a constant daze, blaming their forgetfulness and flights of fancy on ‘slippage’. It will take a visit to the Queen of the Night to understand how these blue souls came to be, and how Paul got suckered into their dream. . .

I loved Hall’s further exploration into the darkness of Shyness; it was exactly what I wanted from a follow-up book, but Hall doesn’t get so clinical or detailed about the town’s history as to shatter that magical realism vibe. Shyness still teeters on the edge of fable, even when Jethro and Nia start to poke and prod its origins – if anything; Hall manages to imbue the town with even more mysticism by writing a twisted history of the place.

‘Queen of the Night’ is, first and foremost, a love story. Jethro and Nia are delectable and infuriating in their lover’s dance, and their sweet romance is the big drawcard of this second book. Shyness may still be a place of dark mystery; full of dreaming blue people and looming sugar junkies, but Hall writes a good old-fashioned romance for Nia and Jethro that’s absolutely swoon-worthy and relatable. Both Wildgirl and Wolfboy learnt a lot about themselves during their night of revelry in ‘This is Shyness’, but in ‘Queen of the Night’ they have to live beyond the fairytale and be brave enough to take a chance on each other. I love these two; Jethro’s gentleman beast to Nia’s tough-girl act is completely adorable, and I won’t be alone in hoping that ‘Queen of the Night’ isn’t the last we see of these two. . .

‘Queen of the Night’ is everything fans are hoping of a follow-up to the mad-cap surrealism of ‘This is Shyness’. Leanne Hall returns triumphant with her delectable prose and whimsical storytelling, pulling readers back into the darkness to know what happened after Wolfboy and Wildgirl’s not-quite-happily-ever-after. I have my fingers firmly crossed that Leanne Hall writes a third instalment for Jethro and Nia, since ‘Queen of the Night’ finishes on a note of endless possibility – as vast as the night itself. Simply stunning. 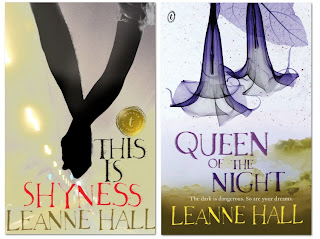