'The Shiny Guys' by Doug MacLeod 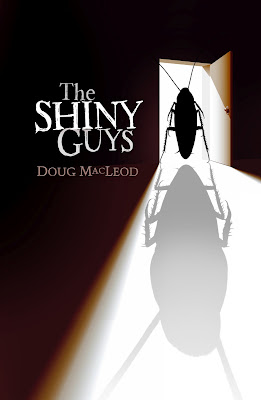 'Wouldn't it be funny if they were real?'
'Shiny red men?'
'What if I were the sane one and everyone else was mad?'

One night, the shiny guys visit fifteen-year-old Colin Lapsley. They don't speak, but Colin can read their thoughts. They want him to pay for the terrible thing that he has done. When the shiny guys won't go away, Colin is admitted to ward 44. Ther he discovers an alien world, a powerful weapon, a gentle giant, and a girl who may be able to see what he can see.

The Shiny Guys is a dark, sometimes funny novel about how fantasy and reality can merge, especially when electricity is involved.

Colin Lapsley is in Ward 44 because he has a little problem. Colin’s troubles began with the disappearance of his little sister three years ago. Briony was snatched from a hiking trail while under Colin’s care, and ever since her disappearance the Lapsley family haven’t been coping too well. Then new information came to light in Briony’s cold case… and ever since then, Colin has been seeing the shiny guys.

Because of Colin’s issues with the shiny guys, he is in Ward 44. Everyone here is a little off-kilter. There’s Mango, a seventeen-year-old guy who has a problem with hugging people. Jill apologizes to everyone, for everything. Val is an alcoholic who has found Jesus Christ through AA. And Len is Colin’s roommate, a cantankerous basket-obsessed jerk whose snores are sickening.

There’s basket weaving on Ward 44. Blue pills and yellow pills throughout the day, plus talks with Dr. Parkinson. Not to mention electroconvulsive therapy (ECT) for the not-so-lucky few.

When a beautiful new girl called Anthea joins the crazy crew on Ward 44, already strange things start spiralling even more out of control in Colin’s mind. He meets Dr. Vendra and Dr. Maximew, two cockroaches from the realm of Nestor who let Colin in on a little secret… Nestorians have been kidnapping humans, and Briony might still be alive.

‘The Shiny Guys’ is the new young adult novel from Doug MacLeod.

Doug MacLeod’s CV and backlist is a wee bit impressive. He’s had a hand in some of Australia’s most beloved and popular TV shows, such as ‘Fast Forward’, ‘SeaChange’, and ‘Kath and Kim’. He also writes books for children, like ‘Kevin the Troll’, and last year his novel ‘The Life of a Teenage Body-Snatcher’ was an honour book for The Children’s Book Council of Australia. However, MacLeod’s newest book is a more serious deviation from his usual comedic fare.

The book begins rather ominously. MacLeod’s bio warns that ‘The Shiny Guys’ is a 'serious book without too many jokes'. And if that warning isn’t enough, the opening line is sure to set spines tingling; 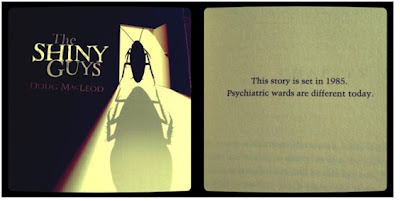 Crazy he may be, but readers slowly learn the circumstances surrounding Colin’s stay in Ward 44, and what bought the ‘shiny guys’ into his life, and it’s enough to send anyone round the bend.

Colin’s little sister, Briony, was snatched while on a camping trip. She was abducted while walking on a hiking trail, with Colin, and nobody has seen her for three years. Colin remembers little of the circumstances surrounding her disappearance, much to his parent’s disappointment. However, when Briony’s cold case was reopened (in light of a horrifying new discovery) the shiny guys started appearing out the corner of Colin’s eye …. Hence, Ward 44.

Colin doesn’t like Ward 44. Since staying there he has become a bit of a kleptomaniac, stealing packets of jam and the good doctor’s texta. He is also deeply fearful of ECT, electroconvulsive therapy, also known as ‘shock therapy’ – and he clings to the knowledge that his parents would never sign the release papers permitting Dr. Parkinson to perform it on him. But Colin has also made a good friend in the ward, a young man called Malcolm (‘Mango’ for short). Mango is a bit of a conundrum – he has rage and hugging issues, and recurring nightmares about the ‘impossible cupboard’, from which there is no escape.

Colin has been taking drugs to get rid of the shiny guys. But weeks into his stay at Ward 44 and they are back, and shinier than ever … and then Colin meets Dr. Vendra and Dr. Maximew, two giant cockroaches from the planet of Nestor. Nestorians, Colin is told, abduct humans. When Colin learns of this he instantly thinks of Briony, and confides his discovery to Mango;

'It makes sense. That's why I was seeing so many Nestorians around the hospital. They have to work together. It takes a hundred of them to abduct a single human. You believe me, don't you?'
'I will always believe you,' says Mango. 'I believe you when you say you will help me find the impossible cupboard. I know that will happen one day.'
'It will.'

Coinciding with Colin’s discovery of Nestor is a newcomer to Ward 44, a beautiful young girl called Anthea, with raven-black hair who has lying, drug and eating issues, and who Mango falls instantly in love with. Together, this trio intend to help Colin with his Nestorian plan…

This book is set in a psychiatric ward. Our protagonist sees cockroaches, and his friend dreams of an impossible cupboard. But this is not a book about ‘crazy’ people. Doug MacLeod writes with infinite sympathy and compassion about mental illness, and the people who are often misunderstood and misrepresented because of that label.

Cockroaches or not, Colin is a witty and endearing young man. I would have liked him anyway, since he’s from my hometown (my sympathies to him);

'I come from a mystical place called Frankston.'

MacLeod has written a rather infectious and cunning young protagonist in Colin. Mango is particularly impressed with him, because he does not swear and ‘talks funny’ – in stark contrast to the few chapters from Mango’s POV, which are written in spelling mistakes and colliding trains of thought. Readers very quickly come to realize that Colin is a unique and interesting young man. And, actually, his ‘illness’ is probably the least interesting thing about him. Rather, it’s his quick-wit and sharp mind that really entertains;

What is it about making a basket that is supposed to induce sanity? Most baskets are made in China, which should make it the sanest country in the world, yet they still melted all their saucepans when Chairman Mao told them to.

Colin is also a bookish young man. He has made a special friend of the Ward’s librarian, and has started reading Franz Kafka’s great unfinished novel, ‘The Castle’. It’s little wonder then, that cockroaches are such a symbol in ‘The Shiny Guys’ – admittedly, you can’t really talk cockroaches without at least a mention of the existentialist writer whose most famous work, ‘Metamorphosis’, was about a man called Gregor who one day wakes to find himself turned into a cockroach.

Something I really enjoyed while reading ‘The Shiny Guys’ was the fact that Colin’s ‘illness’, his depression and hallucinations, did not define him. He is a character in his own right, not a caricature of a ‘depressed person’. It’s also why I was quite surprised to find myself smiling through a lot of ‘The Shiny Guys’ (considering MacLeod’s warning of it being a ‘serious book’). Our protagonist has issues and is depressed, but MacLeod has not written a character that is black and white, and the obvious textbook definition of ‘depressed’. As Dr. Parkinson points out to Colin;

'Well, I think that jokes are your way of coping.'
'With what?'
'You'd be surprised how many comedians suffer depression. Being funny is their way of dealing with it.'

Something else I really liked about ‘The Shiny Guys’ was the lack of villains. I did go into the novel thinking of another famous book set in a psychiatric ward ‘One Flew Over the Cuckoo's Nest’ by Ken Kesey, and I suppose I was half expecting a clear-cut ‘baddie’ Nurse Ratched type of character. Once again, MacLeod writes truer to life, and in ‘The Shiny Guys’ doctors are not out to get the patients and the nurses work a rather thankless job. MacLeod excelled at infusing his ‘crazy’ characters with warmth and a personality beyond their illness. He does the same for the staff members of Ward 44 – the people who are genuinely concerned for their patient’s health and wellbeing, working a rather depressing and difficult job for measly pay.

I was not surprised to come to the end of MacLeod’s book and discover, through the author’s website, that he had once been hospitalized for depression (in Ward 44, no less) back in 1985. I say it was no surprise, only because of the tenderness and patience he showed in writing these characters and carers. MacLeod gave them backstory and a reason behind their ‘mental illness’, he made them human and fragile and utterly endearing. Colin is a remarkable young man, for all that he has suffered in his young life and the remarkable (if imaginary) way he has found to cope with his losses. Mango was an equally extraordinary character whose personal history is gut-wrenchingly and exquisitely revealed.

‘The Shiny Guys’ is a little bit amazing. Doug MacLeod writes about the fragile human psyche with a raw understanding that is quite remarkable in young adult fiction. Yes, as MacLeod warns, ‘The Shiny Guys’ is a serious book, but I would say it’s also an important book for how he realistically portrays psychiatric patients, their care and coping, not to mention the catharsis that can be found in friendship.