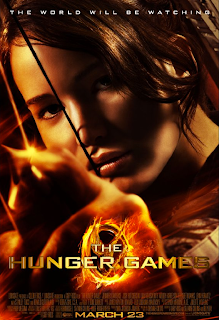 ** It goes without saying that there are SPOILERS in this review, of all the books in Suzanne Collins’s series **

24 tributes enter.
Only one will survive.
Let the games begin.


This is it. The moment fans have been waiting for since they first read about The Capitol, District 12 and Katniss Everdeen back in 2008. The adaptation of Suzanne Collins’s first book in her ‘Hunger Games’ trilogy is here, and it’s bloody spectacular.


I was lucky enough to win tickets to an advanced screening of the film (Thank you, Empire Magazine!) last night. I went to the film in two minds… being a HUGE fan of the book series I did have my reservations about an adaptation. I ashamedly admit I was one of those people who scoffed at the announced casting of Jennifer Lawrence in the epic role of Katniss. I can admit it now (with hanging head) that I was rooting for Kaya Scodelario and couldn’t imagine Jennifer, blonde bombshell and Oscar nominee, as everybody’s beloved volunteer tribute. Oh, how wrong I was!

I was also concerned, like many fans, about the supposed PG+13 rating of the film. I couldn’t imagine how director Gary Ross could do Collins’s book series justice with a PG leash, when violence and glorified blood sport is not only the backbone of the plot but an intricate reflection of the distorted dystopian society. Luckily the film ended up with an M-rating, recommended for mature audiences… And in the film Ross proves that the violence can be impacting and justifiably horrifying, without being overtly bloody or gratuitous. 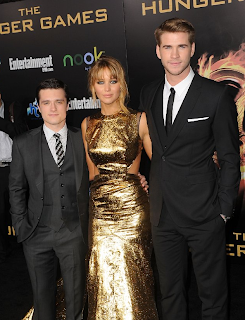 And, finally, I was most concerned by the casting of Josh Hutcherson as Katniss’s fellow District 12 contribute, and potential love interest, Peeta Mellark. Josh is 20 to Jennifer Lawrence’s 22, but his short stature and baby-face make him appear even younger… especially when compared to Liam Hemsworth who plays Gale Hawthorne, Katniss’s friend and eventual rival for her affections in the next two books. My worries about Hutcherson were not helped when I started perusing the premiere photos of him with his co-stars. The height and age difference in real-life seemed a (laughably) too big hurdle to overcome, and I wondered if the awkward red-carpet poses would translate to the big screen….


First of all, the look of ‘The Hunger Games’ is fantastic! I think Gary Ross was doing a bit of a head-nod to the fact that Collins’s books have been compared to George Orwell’s ‘1984’… while watching I did think that parts of the District 12 and Capitol worlds were reminiscent of the 1984 film adaptation. It was in the ‘fancy’ blue clothing that the District 12 children wore to their Reaping, and the smooth granite façade of the Capitol’s stadium.

District 12 will feature more prominently in the next two adaptations, but the glimpse we got in this first movie was exactly what I wanted. It’s like a time-warp, made all the more noticeable when compared to the glitz and glamour of the Capitol. And it was here that Ross’s adaptive vision really excelled…

I said in my book review of ‘The Hunger Games’ that the look of the Capitol and its residents all leaked into the Dystopian theme… District 12 is the coal district, and its residents are hard done by - they’re all a little ragged and dirty and in a 1950’s depression era look, whereas the Capitol is full of outlandish abundance. Women dye their skin fanciful colours and men wear gravity-defying hair dos. There’s no doubt that this fictional future dystopia is our current society in a fun-house mirror – embellished and ruined. But Gary Ross’s Capitol has the feel of Marie Antoinette’s Versailles – for all the pompous wigs and garish colour schemes. Marvelous!

My one complaint with costume design had to do with Katniss and Peeta’s all-important fire costume (which gives Katniss the nickname, ‘The Girl on Fire’). I know this was a tall order, costume-wise, but the flames were underwhelming and too fake looking. I liked their coal-black costumes, but the flames were a bit of a CGI giggle. What worked better, I thought, was Katniss’s twirling flames number, when she’s interviewed by Caesar Flickerman. Now *that* looked cool!

All the Men and Women, Merely Players


What really stood out for me in this movie was the absolute spot-on perfection of the secondary characters.

The smaller players in the books actually come to mean a great deal as Katniss’s story progresses… and for some of them, their roles gain weight in the next two books. So I was pleased-as-punch to discover that the casting of secondary characters was absolutely nailed! There were three stand-outs for me...

Elizabeth Banks as Effie Trinket, Katniss and Peeta’s Capitol-assigned escort. Banks could have been swamped by the outlandishness of her character, and furthermore by her gloriously over-the-top costume. But she really, truly excelled in this role (small as it may be). She was funny, while managing to remain a Capitol darling who doesn’t quite gain our sympathy just yet… 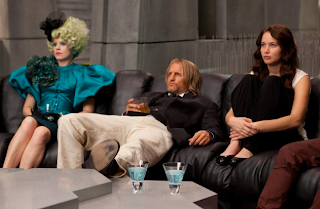 Stanley Tucci as Caesar Flickerman was PERFECTION! Caesar is the host of the Hunger Games televised event; he interviews the tributes and narrates the goings-on of the actual arena games. I’m a big Tucci fan anyway (coolest dad ever in ‘Easy A’!) but I thought he outdid himself and fan expectation in this role. Even without garish prosthetics (there was rumour of false teeth) he managed to convey the disturbing hilarity of Caesar’s role to narrate the bloodthirsty games for the viewers at home. Tucci’s smile alone was totally Caesar – through and through. 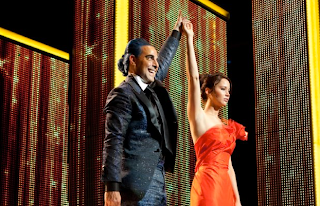 Finally, Amandla Stenberg as Rue, the young District 11 Tribute. Now, Rue’s book character has a big fan-following, and was always going to be favourite. So I do wonder if part of my being impressed by Stenberg was just the fact that she had a great character to play (courtesy of Suzanne Collins), but upon reflection I just think she was another example of hit-the-nail-on-the-head casting. Rue’s early scenes drew some sweet giggles from the audience (particularly her antics during Tribute training) but it was her climactic death that really proved she was a force to be reckoned with. It’s a pivotal scene for a lot of reasons – Katniss’s first close quarters kill, among them. But the scene was just heartbreaking and both Stenberg and Lawrence did a wonderful job. The sound editing in this scene, and switched-perspective were also masterful.

One of the more contentious secondary character castings in the movie was Woody Harrelson as Haymitch Abernathy, previous District 12 winner, now Katniss and Peeta’s mentor. I know everybody wanted Robert Downey Jnr (me included!) to play the alcoholic curmudgeon. But Harrelson did a surprisingly good job (distracting blonde, straggly locks aside). Something I liked in this adaptation was how Gary Ross showed the behind-the-scenes workings of the Hunger Games. He takes viewers out of the arena on occasion, to show Haymitch schmoozing with Capitol sponsors and getting people on the outside onside with Katniss and Peeta. This was brilliant, and a very important component to the Games! I also liked Haymitch’s interactions with Games coordinator, Seneca Crane (Wes Bentley – with a FANTASTIC beard!), which illustrated just how badly the odds are, and not always in anyone’s favour because much of the Games is scripted. Likewise, Seneca’s scenes with President Snow (Donald Sutherland – again, more brilliant casting) are a nice leeway into the next two books…

Probably the worst casting was Lenny Kravitz as Cinna (Katniss’s designer). He pretty much just played Lenny Kravitz (tight leather pants, but no sunglasses – thankfully!). His scenes illicited a few giggles, only because of the absurdity of Lenny Kravitz dishing out deep and meaningful’s.


Now, to the most important casting of all… Katniss and Peeta.

I won’t comment on Liam Hemsworth as Gale. As fans of the books know, Gale’s role in the first novel is absurdly small and it’s impossible to say anything about Hemsworth’s role beyond “he did good”. If I was Josh Hutcherson I might be mildly ticked off at having to share the red-carpet with an co-star who had a diminished role in comparison to my own… but, hey, Gale’s importance lies in book’s two and three.

I bow down before Jennifer Lawrence and take back every single negative thing I ever said about her casting. She was perfection. I always think that with ‘Twilight’, fans are smitten with the series because of love interests, Edward and Jacob (nobody actually likes Bella, do they?). But with ‘Hunger Games’ it seems like all fans have a bit of a crush on Katniss. We want to be her and we want the best for her… so much so that her character has taken on a cult-like following, akin to her role in the District revolution. But fans forget that while she kicked butt in ‘Catching Fire’ and ‘Mockingjay’, she started out as just another scared tribute in ‘Hunger Games’. Jennifer Lawrence bought such a fantastic, steely vulnerability to the character – she was sublime, and I think she will have exceeded many fan’s expectations.

Josh Hutcherson as Peeta, I’m a little more on-the-fence about. I admit, I went in with low expectations and came away pleasantly surprised… but not totally convinced. I still think that in the romance stakes, there’s no competition between him and Liam Hemsworth, and knowing the outcome of the love triangle I’m afraid lots of people will be wondering a big WTF? when it comes time for Katniss to choose. So I didn’t feel much sizzle between Peeta and Katniss (admittedly though, we’re meant to be constantly questioning and double-guessing Peeta’s affections for Katniss… so maybe that worked well in hindsight?). I just didn’t take Peeta seriously enough, I don’t think. I mean, there was one camouflage scene that had me (and the entire audience) cracking up in hysterics, but I still don’t know if that was actually meant to be serious (instead I was left to wonder why the Capitol included a M.A.C. cosmetics counter in the arena?). I think Josh Hutcherson will really be given an opportunity to show his mettle in ‘Catching Fire’, and I really hope he doesn’t botch it up. It could go either way at this stage.

The Sound and the Fury


Finally, I feel like I have to mention the violence. I really, truly think that the violence was necessary in this adaptation, because it’s intricate to the books. The unnatural violence of kids killing kids for sport and entertainment is so viscerally wrong, it’s part of how Collins framed this as a Dystopian world.

Gary Ross does bring the violence in this movie. It’s not overly bloody, and it’s not unnecessary and does stay true to the books… but I know that at the advanced screening there were people wincing and flinching, gasping at certain death scenes. And you know what? – good! It’s meant to impact. It’s mean to provoke a feeling of horror and wrongness – juxtaposed with the scenes of Capitol viewers going crazy with blood-lust as they watch the big screen.

May the Odds be Ever in Your Favour


All in all this is a superb adaptation – and a befitting tribute to Suzanne Collins’s wonderful series. If you loved the books, rest assured they have been adapted with the upmost care, respect and craft. I can’t wait for the next two films – bring it on!