'Losing It' by Julia Lawrinson 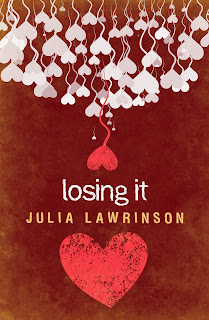 To avoid Losing It in the bushes with some random guy in a heavy-metal T-shirt after too many tequila shots, four best friends make a bet: to lose it before schoolies week – and preferably in a romantic, sober way that they won't regret.

What follows is a sometimes funny, sometimes awkward, but always compelling comedy of errors as Abby, Mala, Bree and Zoe each try to find their Mr Right . . . or at least get laid.

Meet Bree, Zoe, Abby and Mala – the GeeGees (aka ‘Geek Girls’). The GeeGees quickly banded together as the outcast scholarship kids at prestigious SMAC (aka ‘St. Michael’s Anglican College), and ever since then they have been inseparable.

Bree is the glamazon of their group – she turns boy’s heads but has a reputation as an ice queen.

Abby is a sweet Christian girl – but don’t be fooled, because it’s the quiet ones you’ve got to look out for.

Mala is the dutiful daughter who is slowly being suffocated by her lovingly over-protective family.

And Zoe is trying to control her insatiable love of men’s muscly arms, and trying to keep her jealousy of Bree in check.

All four girls are currently still in possession of their V-plates (aka ‘virginity’) but all that’s about to change… Schoolies week is, statistically speaking, the time in a young girl’s life when she is most likely to pop her cherry. But losing it on a sandy beach surrounded by boozing teenagers and empty bottles does not sound overly romantic. So the GeeGees have made a pact to lose ‘it’ before Schoolies.

‘Losing It’ is the new YA novel by Australian author Julia Lawrinson.

For some readers, ‘Losing It’ will be a head-nodding, cathartic and hilarious read that will either trigger memories of your own befuddling experience, or act as a ‘what not to do’ as you navigate the treacherous terrain of virginity. And then for a few other readers, ‘Losing It’ will no doubt be a special glimpse into the secret world of girls … and all our neurotically romanticized ways.

When we meet the GeeGees – Bree, Abby, Mala and Zoe – they are formulating a plan to avoid a dreaded Schoolies week cherry-popping;

'Okay,' Zoe said. 'Here's a better idea. Why don't we still have the rules, but also say that nobody's forced to participate if they don't want to.'
'What's the point of that?' Bree said. 'We may as well just leave it to chance.'
'Well, no,' Zoe said. 'It could be a challenge, instead of a bet.'
'What's the difference?' Bree asked.
'A bet is something juvenile, shallow, something you do with no thought. A challenge, on the other hand, is something you rise to, so to speak –' she ignored the giggles '– something that has a moral element, something that implies that you're overcoming the thing that is holding you back, that you're a new and better person by the end of it.' Zoe raised her fist in the air. 'It's about freedom – freedom to become somebody different!'
'You sound like you're talking about a new political movement, not getting laid,' laughed Mala.


From there we follow the girls’ individual journeys through year twelve, on their missions to lose ‘it’.

We meet Zoe – a science geek with an inconvenient penchant for muscle-bound jocks. For a few years now Zoe has been quietly stewing over the fact that her best friend, Bree, seemingly turned into a glamazonian hottie over night … leaving the rest of the GeeGees to pale in comparison. Zoe is especially frustrated at having to watch Bree parading around with her gym buddies – handsome older guys with bulging pectorals and drool-worthy arms. In a fit of frustration Zoe turns to Matty, honorary brother-like GeeGees member and Zoe’s science partner. It’s not love, it’s not even lust… and the back of a Yaris is hardly the place to get amorous. But a girl’s gotta lose what a girl’s gotta lose – and Zoe is hell-bent on losing her V-plates while she’s trying to get her P-plates.

Abby is a good Christian girl whose faith in love was rocked when her Youth Group sweetie got cold feet and chose abstinence over her virginity. Abby is struggling to get close to anyone since her first romantic disaster, and she doubts she’ll even be in the virginity competition. Putting a further dampener on her cherry-popping is the reappearance of her terrible, atheist older brother, Zeke. He’s back from the wheatbelt and he has a few revelations to share with the family…

Mala is a good, dutiful daughter with an impossible crush on her cousin, Mo. From an early age she knew that Mo was the one for her – but what’s acceptable in the old country is considered incest in Australia… and Mala has to put aside her romantic notions about the beautiful and dark-eyed Mo.

Finally, Bree is the St. Michael’s Anglican College resident ice queen. All the girls want to be her, and all the boys want to get in her pants… but nobody knows what really makes Bree tick. The St. Michael’s boys don’t interest her, and she envies her friend’s crushes and flirtations – their enviable lust leaves Bree feeling like a late-bloomer. But all that changes when she has a revelation at the gym one day.

First off, I should say that ‘Losing It’ is not Julia Lawrinson writing a lengthy and raunchy advocacy of promiscuity. The GeeGees are not entering into this ‘competition’ for one-upmanship or to participate in any of those rainbow party type shenanigans that ‘Today Tonight’ so likes to scare parents with. The girls enter into the ‘competition’, rather blindly, simply because they want to get the task of losing their virginity over and done with … and since they are not thrilled with the statistic that predicts they’ll most likely lose it at Schoolies week, they decide to do the deed beforehand. Now, if you’re tut-tutting and shaking your head at this naiveté, then never fear!… Lawrinson explores the myriad of ways that all four girls realize the pitfalls of their plan.

I really liked the fact that Lawrinson didn’t preach in this book. Readers, and the GeeGees, all have to come to the realization that losing your virginity to a competitive timeline is probably not the smartest move. All of the girls have mini-breakthroughs about themselves in the course of ‘Losing It’… but Lawrinson doesn’t shove these life lessons down reader’s throats. She doesn’t make situations too easy on her female characters either. Like Abby, who thought she had her brother all figured out until he shocked her with his reappearance. Or Bree, who everyone else has all figured out until we read her point of view and realize how wrong they are. This really is Lawrinson inviting readers into the secret world of girls (whether to commiserate or learn a little something) and she doesn’t pull punches or write an easy way out for her protagonist’s tricky situations. I liked that, a lot.

Really, all of the girl’s individual stories were juicy enough to warrant a book all to themselves. I really wished some girl’s stories had been longer (or stand alones) in particular, Bree & Abby’s – whose revelations (both personal and familial) really intrigued me, and by the end of the book I was wishing we’d been able to spend more time with those two girls in particular. I would have especially liked to read the fallout and ramifications of their situations…

I also wish the book had focused more on the GeeGees friendship group. We don’t really get many scenes with the foursome – and for that reason it felt like their talked about camaraderie was missing, not really shown. In the beginning I was concerned that the ‘losing it’ competition was made in spite – that these girls weren’t really close friends and the comp was a bit of sabotage by some of the girls in the group. But as the novel progresses and we read each of their perspectives, we do come to understand that the girls do care about each other and value their friendship. I just think that might have been a bit clearer though, if we had more scenes with the GeeGees hanging out together. On the other hand, each of the girls has secondary characters that become big players in their individual stories… science geek, Matty, was a particular favourite!

Funny and endearing, Julia Lawrinson has written an unflinching and hilarious journey through the momentous time in four girl’s lives when they decide to lose ‘it’, on their own terms.

Australian Women Writers 2012 Reading and Reviewing Challenge
Posted by Danielle at 11:26 AM