'Grace Beside Me' by Sue McPherson 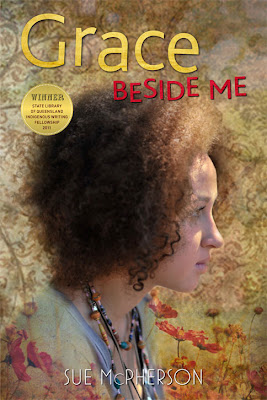 Life is not ordinary for Fuzzy Mac. But it should be. What could possibly be exciting about growing up with her Nan and Pop in a small country town?

Rivalry, romance, Nan’s mysterious premonitions, an encounter with a particularly unusual kind of ghost and the mix of characters who live in this high-country town make Fuzzy’s life far from boring.

‘Grace Beside Me’ is packed full o f timely wisdom, humour and down-to-earth advice, reminding us that, despite the difficulties of growing up, we are never alone on this journey.

Meet Fuzzy McCardell, otherwise affectionately known as ‘Fuzzy Mac’ – named for her mop of fuzzy hair, and because her real name, Ocean Skye, is just a little too hippy-dippy. Fuzzy Mac lives in Laurel Dale or ‘Laurie' as the locals call it, with her Nan and Pop.

Fuzzy has lived with her grandparents ever since her mother died of a drug overdose when Fuzzy was still a baby. Fuzzy could have lived with her dad, Sonny Boy, but he travels a lot and it’s gotten to be that Fuzzy couldn’t imagine life without her Nan and Pop. Because of them Fuzzy uses words like ‘bloomers’ and ‘wireless’, she listens to Nat King Cole and adheres to Nan’s strict protocol of hanging washing on the line (undies on the inside, so you don’t flash your neighbours).

We meet Fuzzy in 2008, in her last year of high school, which just so happens to be a year of big change. For one thing, Kevin Rudd is saying ‘sorry’ to the Aboriginal people for their stolen generation – this means a lot to the McCardell family, since Nan is part Koorie and there are plenty of people in Laurie from tribes all over Australia who were taken and affected. But that’s not the only change happening . . .  Nan starts the year with one of her premonitions, and Nan’s words of warning are never to be trifled with. For one thing, Nan speaks to ghosts and knows a thing or two about the powers that be. For another, Nan dreamt of brown sugar spilling all over right before Fuzzy’s mum died. Something is happening in Laurie and to Fuzzy, who can feel the change in her guts.

In a year of change, Fuzzy has a story or two to tell, and she intends to tell it in her own sweet time. . .

‘Grace Beside Me’ is the debut young adult novel from Sue McPherson, which won the 2011 State Library of Queensland Indigenous Writing Fellowship.

The town of Laurie is a wonderful melting pot of curious characters. Fuzzy writes with true affection about some of her friends and neighbours, recounting their antics and delighting in their odd behaviour. There’s Yar (Thomas Edgar Stanley the Third) who occasionally wears a purple tutu, insists everyone wear purple on their feet when inside his house (to placate the fairies) and has a house between him and his wife, Jilly (they love each other very much, but cannot reside in the same residence). The McCardell family are good friends with the Steiners, who came to Laurie after surviving the Holocaust. Mr. Steiner was an especially good friend, and Fuzzy can still remember hearing the story of how once, when he was a boy, he played violin with Einstein.

Not all of Laurie’s residents are happy souls though, and Fuzzy tells their stories too. Like Lefty, who never knew his heritage and ended up in jail, but is on a better path now thanks to Nan and Pop. There’s also Bruiser Buchanan, who regularly lays into his wife, Trudy, while their eight children watch (and until Pop intervenes). The Mullins boys never got out of the jail system, but there is one Koorie girl who came good. Beautiful Mary is a vintner who travels all over Europe for her work. But Mary made good on account of her father, Dr. McNamarra, a white doctor who loved Mary’s mum, Ruby, but whose family forced him to abandon her after she got pregnant. There’ also Mr. Ridgeway, the town Mayor, who Nan and Pop have over for tea and biscuits, but who Nan can never stand to be in the same room with for too long. Fuzzy is starting to understand Nan’s suspicions too, when Mr. Ridgeway starts staring at Fuzzy too long, and making her hairs stand on end.

Fuzzy’s classmates are also interesting. There’s Catherine Turnbull who comes from old money and infuriates the class when she regurgitates her parents thoughts about sorry day being a waste of taxpayers’ money. There’s also new girl Matilda Grace, who brings stories about boys and sex – and Matilda’s crush-worthy brother, Brian, who has all the Laurel Dale Public School girls panting after him. But Fuzzy has eyes for Teddy Ryan, who is on his way to ‘alright’ and has a cheeky grin at the ready for Fuzzy. And of course there’s Tui Mui, Fuzzy’s boy-obsessed best friend who is a walking dictionary.

Sue McPherson has written a beautiful coming-of-age story set in the small town of Laurie, and told through Fuzzy Mac’s curious eyes. It may seem like ‘Grace Beside Me’ is merely a collection of stories about this strange little town, but Fuzzy’s side-stories about Laurie and its inhabitants is a way for her to get the words right in telling her own tale. To understand Fuzzy, we’ve first got to first understand her town and its history, the people who live here and influence her outlook on life. As Fuzzy comes to learn, some stories are not so easy to tell, but they are all about connection and remembering;

Pop, Nan and me, we all love stories, especially good ones.
Nan says, ‘All good stories need a storm or a climax.’ I agree with Nan. It’s the guts of the storm that enriches the story, gives it strength and substance.
Like Nan and Pop I’m also a guardian of stories. Without a keeper of words, stories tumble and fall, eventually melting into the ether, never to be heard of again. Stories link us to our mob, doesn’t matter if you are Koorie, Irish, Kiwi, Welsh or Indian.
It’s the listening and telling of these stories that bring our people close, both young and old. Stories keep our culture and our faith alive.


In telling her story, Fuzzy is also trying to find her little bit of grace. It’s something her Nan and Pop talk a lot about – in moments of great trouble and hardship, looking within yourself for peace. It’s something that walks beside you, always; you just have to be willing to let it in.

Fuzzy Mac is a wonderful narrator. She’s a beautiful hodge-podge of young and old, wisdom and youth. Living with her grandparents has given Fuzzy an odd old lexicon of words (from ‘bloomers’ to ‘bloody oath’). And always Fuzzy tries to follow her grandparent’s well-learned wisdoms, but it’s not always easy when they’re in conflict with her impulses and head-strong heart.

I also really loved the characters of Nan and Pop, who were absolutely crack-ups! Pop’s a bit of a grizzly old-timer, having survived the Vietnam War and a lifetime of racism, but has come out the other side with a kind heart and infinite patience. Nan is a devout woman who speaks to ghosts and has her own ideas about heaven and redemption. I especially liked Nan’s idea of Jesus as “a mixture of Denzel Washington, Vivian Richards, Sidney Poitier and, of course, Marvin Gaye.” These two characters were wonderful and heart-warming, and the love in the McCardell family was palpable.

‘Grace Beside Me’ is a story to get gloriously lost in. McPherson has written a fantastic narrator in Fuzzy Mac, and her hometown of Laurie is full of beautiful chaos and lovely curious characters . . .  readers will enjoy spending time in Laurel Dale with Fuzzy and her friends, learning the story of Lefty and Yar, Ruby and her daughter Mary, the bad Mullins boys and creepy Mr. Ridgeway. All these stories are interconnecting and leading us to Fuzzy Mac finding her grace and understanding more about herself and her mother. Slowly, bit by bit, Fuzzy Mac’s story unfolds, and it’s a wonderfully heartfelt tale to behold. Grace beside you, always.

'Grace Beside Me' will be available from Magabala Books from April 16th, 2012. 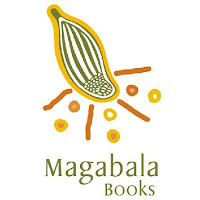 Australian Women Writers 2012 Reading and Reviewing Challenge
Posted by Danielle at 9:53 AM