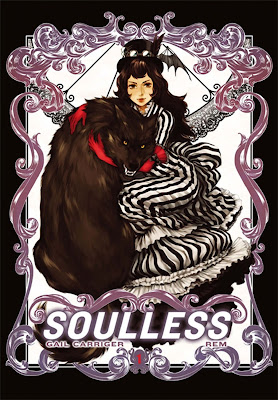 Alexia Tarabotti is laboring under a great many social tribulations. First, she has no soul. Second, she's a spinster whose father is both Italian and dead. Third, she was rudely attacked by a vampire, breaking all standards of social etiquette.

Where to go from there? From bad to worse, apparently, for Alexia accidently kills the vampire - and then the appalling Lord Maccon (loud, messy, gorgeous and werewolf) is sent by Queen Victoria to investigate.

With unexpected vampires appearing and expected vampires disappearing, everyone seems to believe Alexia responsible. Can she figure out what is actually happening to London's high society? Or will her soulless ability to negate supernatural powers prove useful or just plain embarrassing? Finally, who is the real enemy and do they have treacle tart?

I love the recent trend of graphic novel adaptations. I really enjoyed Dabel Brothers ‘Mercy Thompson’ adaptation, and I especially loved Del Rey’s adaptation of Diana Gabaldon’s ‘The Exile’. Now, I know that lots book fans haven’t really embraced the graphic adaptations, for a number of reasons – some of them are valid (such as not liking character drawings to intrude and determine reader’s imaginations) to the ridiculous (like lashing out at authors because they assume the graphic novel is the next book in the series, not an adaptation of the first book?!). Whatever your stance on the graphic novel debate, I truly believe that everyone should at least give these adaptations a chance, because they might surprise you. And if you’re dipping your toes in the adaptation waters for the first time, I can highly recommend this manga representation of Carriger’s steampunk series.

I was curious at reading a manga ‘comic’, when I have only ever read (and enjoyed) graphic novels. But I actually think the more comic styling of manga suits Carriger’s over-the-top series. For those who are unaware – graphic novels are considered more ‘books’ than comics, often more text-heavy and more realistic drawing representations. The Japanese word ‘manga’ literally means comic/graphic/cartoon, so is basically the same as a graphic novel. . .  except the manga format looks less real, more anime (I guess you could say it’s the difference between a drawn cartoon show, and a CGI movie?). 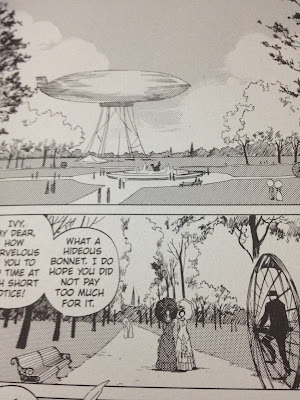 Carriger’s steampunk series is perfectly suited to the manga style. For one thing, the ‘Parasol Protectorate’ book series is so rich in outlandish description (from mechanical ladybugs to luxury dirigibles) that seeing these gorgeous steampunk contraptions drawn to life will be absolutely splendid! The little drawings of steampunk machinery throughout ‘Soulless’ are lovely and fantastical, and exactly how I pictured London when reading Carriger’s books! Admittedly, ‘Soulless’ features less of those lovely steampunk inventions than latter books in the series – indeed, this first book is more about setting up the players and meeting the characters. And I must say, artist Rem has drawn each and every one of them to a T!

Alexia is beautifully represented, in all her big-busted, parasol-wielding glory. Actually, quite a lot is made of Alexia’s *ahem* assets. . .  but it’s often for a bit of light relief, like when Conall is bending over to examine a dead vampire, and just so happens to cop a lovely eyeful down Alexia’s corset. I really loved Aexia’s drawn fashion too – her dresses are Victorian delights, and her long locks are always a little bit unkempt and wispy (staying very true to Carriger’s descriptions of her in the books). Speaking of style. . . . I also love, love, loved the mangafied Ivy Tunstell! Rem has indeed captured her outlandish dress sense; her hats are divinely flouncy and there are ruffles aplenty! 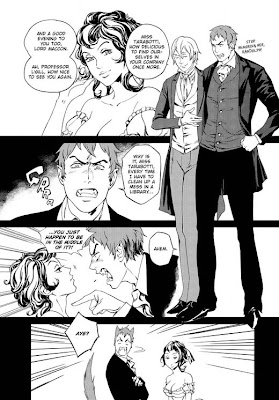 And then there’s Conall (Lord Maccon). At first I wasn’t overly thrilled with his appearance – I guess I wanted him a little more rugged and Alpha manly? And I thought his semi-wolf ‘angry face’ looked a little ridiculous (his actual werewolf does look more like a frightening wolf, it’s just when he’s snarling at Alexia that the ears and tail pop out for some reason). My scepticism turned to appreciation towards the end. . .  as people who read ‘Soulless’ will remember, at the end of the book werewolf Conall is captured, and thrown into a cell with Alexia. . .  whose touch turns him human (and very, very naked). And *that* is the Conall I was imagining! He’s absolutely scrumptious in his naked manga glory – all broad chest, rippling abs, not to mention firm in all the right places (insert lascivious wink).

My other favourite drawn character was Lord Akeldama – Alexia’s vampire friend and delectable cream puff. Rem has drawn a fabulously flamboyant Akeldama, and I especially liked that he’s so damn attractive! 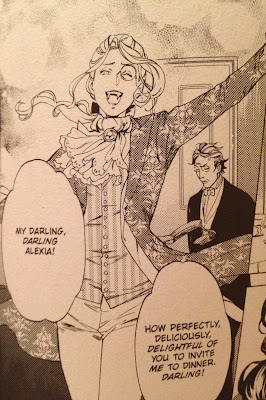 ‘Soulless’ is one of the best adaptations I have ever read! The manga style perfectly suits Gail Carriger’s over-the-top fabulous steampunk paranormal series; from the Victorian clothes to the roped dirigibles in the park. I especially loved that the manga adaptation covers every aspect of the first book! Even if you’re not so sure about illustrated adaptations, give ‘Soulless’ a read – I think lots of sceptics will be very surprised at how wonderful this adaptation is.