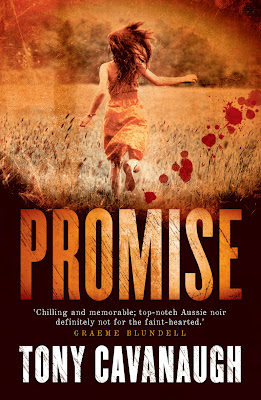 Top Homicide cop Darian Richards has been seeking out monsters for too long. He has promised one too many victim's families he will find the answers they need and it's taken its toll. After surviving a gunshot wound to the head he calls it quits and retires to the Sunshine Coast in an attempt to leave the demons behind. But he should have realised, there are demons everywhere and no place is safe. A serial killer is prowling the Sunshine Coast area and Darian tries to ignore the fact his experience could make a difference hunting him down.

All he wants is to sit at the end of his jetty on the Noosa River and ignore the fact that girls from the area have vanished over the past fourteen months. All blonde and pretty. Youngest: 13. Oldest: 16. He knows they are all dead but the cops were saying 'missing' or 'vanished . That s what you have to say if you don t have a body.

Jenny Brown was the first. She vanished sometime after 4 in the afternoon, Saturday 15 October the previous year. Except for her parents and her friends and everybody who knew her, it was thought she was just a runaway. Especially by the cops who allowed a good two or three minutes before arriving at that conclusion. By the time they d reached the gate to the front yard of her house, before they d even walked across the road and climbed into their cruiser, they would ve forgotten Jenny Brown even existed.

But then others disappeared and they couldn t call them all runaways. Darian can t sit idly by and he decides he is going to find the killer and deal with him ... his way.

Darian Richards threw his service weapon into the ocean and walked away from his job as Australia’s more successful homicide detective. He has left Melbourne behind after failing to catch ‘the train killer’, and has settled in for retirement on Queensland’s Noosa River.

Darian spends the first few months enjoying his retirement and a certain notoriety in his new, small town. He has a similarly retired friend in Casey Lack, a fifty-something ex-brothel owner who also migrated from Melbourne, after his club was blown to high heaven. Then there’s Casey’s twenty-something girlfriend, Maria, a cop on the local force. Maria is beautiful and smart (as Darian believes all female officers are, far more than their male colleagues) but she doesn’t like Darian, partly because her station has ruffled feathers over the country’s top homicide detective moving on to their turf (retired or not).

And then girls start going missing . . .

Young girls, aged between 13 and 16, all with blonde hair have been reported missing. At first the local police were happy to write the disappearance of one girl off as a runaway case. . . but when more reports came in, with all the missing sharing similar physical descriptions, it was hard to ignore. And then the ‘trophies’ started showing up – the girl’s mobile phones, with disturbing photos loaded, leave little doubt that all of the missing are dead, and met violent ends.

Darian cannot ignore ‘Operation Blonde’ for a minute longer. The local police are showing a disturbing level of incompetence, and in once case cover-up, and he is compelled to reach for his gun once again.

This is a highly-anticipated novel. Tony Cavanaugh has quite a resume – he’s a writer and film/television producer (having worked on shows like ‘The Sullivans’ and ‘Carson’s Law’). He was also nominated for the Victorian Premier’s Literary Award for the screenplay ‘Father’ and the Queensland Premier’s Literary Award for the screenplay ‘Through My Eyes’. ‘Promise’ is his debut novel, and with a writing resume that stellar it is riding on high expectations . . . and meets them, in my opinion.

A few years ago Scottish crime writer, Ian Rankin, made the explosive statement that "the people writing the most graphic violence today are women ... they are mostly lesbians as well". Backlash ensued. But I would say that if Rankin were to read Tony Cavanaugh’s debut novel, he might just eat his words.

‘Promise’ is a difficult read. Cavanaugh has written a bloody and masochistically violent killer, and he vividly documents the abuse of the missing girls in stomach-churning detail. The detail is especially overwhelming because parts of the book are told from the killer’s point of view (interspersed with Darian’s). That’s right, from the get-go readers know who the killer is; he calls himself ‘Winnie’ and it becomes quickly apparent that he is warped and caught somewhere between man and child; he’ll rank his favourite Disney movies in one sentence, and then go cut into his latest victim. The story becomes a cat and mouse game, as we read Darian close in on the killer, while also simultaneously subjected to the madman’s thoughts, his creepily personal addresses to the reader (“brothers and sisters”, as though he knows he has an audience) and then we read his torture, rape and eventual killing of his young female victims. It is supremely unsettling, akin to reading Patrick Bateman’s first-person lunacy in ‘American Psycho’.

Winnie’s descriptions of his outbursts, sexual assaults and violent rapes are horridly vivid and hard to get through. But what is also creepy is his step-by-step ‘instruction’ on how to kidnap ‘prey’. He speaks, at length, about how much he loves shopping centres; in particular, he adores shops like SUPRÉ and Sportsgirl, where he can pick his next victim, perhaps catch a glimpse of them in the change-rooms. . . As a female reader, I found the lead-up to Winnie’s violence utterly terrifying, because there’s no doubt in my mind that Cavanaugh has done research into how predators work – and it’s horrifying to think how simple it is to be caught in some lunatics’ crosshairs.

So, in that sense, ‘Promise’ is extremely unsettling. But at the same time, the violence and grotesqueness of Winnie’s POV did add to the tension. I can’t deny that it was damn good storytelling, no matter how disturbing.

I’m not sure if ‘Promise’ is the first in an ongoing series with Darian Richards, but I hope so. Because Darian is a very interesting ex-cop. For one thing, he’s extremely smart. Cavanaugh places a lot of emphasis on Darian having been the top homicide detective in Victoria – with a kill-rate and arrest record that had him being courted by other states to clean up dragging cases and nagging cold cases. And I, for one, completely believed that Darian was that good. He receives some geeky tech-support help from a friend back in Melbourne called Isosceles (by all accounts a brilliant recluse) but for the most part Darian relies on his own wits throughout the investigation.

Darian is by no means an ‘ordinary’ cop – this job has got under his skin and it will never leave him. Darian’s unique brilliance comes to focus in strange little paragraphs and asides. Like when he recounts the history of guns; that his preferred Beretta company goes back to 1526 and the Italian Wars, while the Smith & Wesson is from 1852 (coinciding with the American Civil War) and the Glock is a product of the 60’s (and the Vietnam War). When he comes face-to-face with the more archaic and ‘Neanderthal’ attitudes of the local Queensland police force, he puts those deadbeat cops in their place (either with an encyclopaedic knowledge of the rule book, or physical force). Darian has been in the force since he was nineteen-years-old; and in his many years he has collected insights into the cop psyche that are Raymond Chandler-esque for their accuracy;

Cops have this thing about loyalty. When a cop puts on a uniform, it’s like they’ve just departed the human race and joined another clan. I used to be like that. You think you’re different and, in truth, you are. You think your loyalty is to your fellow officers but it’s not. It’s to the victims. Sometimes it takes a little while for a cop to discover that. Sometimes a cop won’t ever discover it.


That’s not to say that Darian doesn’t have his faults as a protagonist. He is fascinating for his brilliance, but certainly lacking a more substantial warmth and, possibly, long-lasting interest. Darian is a solitary being, and by no means perfect. He admitted to being an alcoholic at one stage in his career. Part of the reason he decided to retire to Noosa was because of a broken promise to a victim’s mother, and the near-miss ethical over-the-line he almost had with that same mother. Darian doesn’t do relationships – but he’s not the womanizing archetypal cop so prevalent in the genre. Instead he prefers the once-a-week company of a young escort, who he ‘quietly loves’, but only needs human contact in small doses. At one point he reveals that his father abandoned the family when Darian was ten, to go and live in Thailand. But personal insights like that are far and few between, and I did wish that as a reader I had more of a human connection to Darian, more understanding of what makes him tick and future interesting human entanglements.

The more interesting character, really, is Maria who becomes a sort-of sidekick for Darian. Maria is young, and for her the sheen of the badge hasn’t quite worn off. But over the course of ‘Operation Blonde’ she starts having nightmares, and begins to understand the inherent evil in some people . . . even more disturbing for Maria is the realization that her fellow cops are not perfect, that they do not have the same integrity as she does (particularly where female victims are concerned). Darian is not surprised, since he maintains that female cops are always smarter. But for Maria, circumstances and damning evidence lead her down a dark path;


Something else I really loved about ‘Promise’ was how Tony Cavanaugh peppered the story with interesting insights and factoids about Australian police history, the most interesting of which concerned females in the force. For example, Darian (again, showing his mettle as an above-average cop) mentions that the first female police officers in Queensland were Ellen O’Donnell and Zara Dane, who joined in 1931, but “throughout their lifetime careers on the force, they were never sworn in.” One of the most fascinating (and disturbing) factoids was about Lorelle Saunders, who in 1984 became the first woman to become a detective in Queensland – only to have her fellow officers charge her with conspiracy to murder a fellow cop (her lover), “a charge of which she was innocent”, but still spent ten harrowing months in prison for. Thanks to Cavanaugh, I went away and researched these juicy morsels of history.

All in all, ‘Promise’ is a fascinating and unsettling read. I welcome Tony Cavanaugh as a startling new voice in the genre, and hope that he intends to write more books for his unique ex-cop character, Darian Richards. Gruesome it may be, but ‘Promise’ is also a deliciously hair-raising thriller to keep readers hooked until the very last sentence. . .