'Disharmony' The Telling #1 by Leah Giarratano 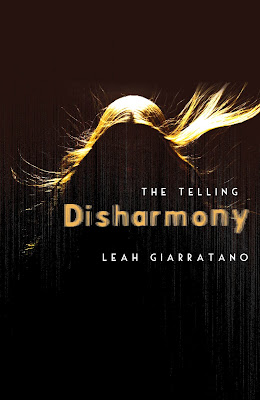 A gripping new series about a collision of worlds, the power of destiny, and the darkness in us all . . .

We live in a world of chaos, but it has not always been this way. Wars, murder, poverty… they all started five thousand years ago. And when the chaos started, a prophecy foretold of three children who would one day bring an end to it. A psychopath. An empathy. A genius.

One, a child with no capacity to feel emotional pain and no ability to understand the emotions of others.
Another, the opposite, a child of such pure emotional connection that she would have known where and why you had an itch before you even knew that a mosquito bit you.
And the third, a laser beam of concentrated brilliance – pure, personified intelligence.
And there you have it. The Psychopath, the Empath and the Genius.
Together, they can create harmony. You know, heal the world. Peace, love and hummus, baby.
But the big problem was, according to the Telling, they could also be used as a weapon if the wrong person got a hold of them, schooled them up the wrong way. You see, they have to be taught about their Calling. They have to be instructed from their earliest years in how to use their powers, in how to fulfil their destiny, in how to save the rest of us. They need guidance, the right parents. They need love.


Those children were born to the witch, Morgan Moreau, who died birthing the genius. Then the children were separated – and that’s where the story really begins.

‘Disharmony’ is the first book in a new Australian YA series by Leah Giarratano.

Samantha White is a stolen Gaje-princess, living with her adoptive gypsy family in Pantelimon, Romania. She is sixteen-years-old, and loves her family dearly, even if she knows she isn’t really one of them. Lala is the closest thing to a mother that Sam has ever had, and she teaches her how to trick foolish Gaje (non-Romony) out of their money during fortune-teller sessions. Only, sometimes Sam’s gypsy witchery is real – sometimes she can tell when a person’s heart is breaking, or they’re too blind to see their own ignorance. Sam loves walking through the forest at night, hanging out with her best friend Mirela or meeting up with her pickpocket friend, Birthday Jones, in the streets of Bucharest. Sam also loves being near Tamas – a fellow gypsy boy who tends to the camp’s horses, and has held Sam’s heart since she was just a girl.

But the winds of change are coming; Sam can feel them chilling her skin. The gypsy king – an overweight ex-mobster – has his sights set on Sam and her ability to read people’s fortunes with such pin-point accuracy, beyond just a gypsy show. Sam and her friends find themselves running through the city streets, being chased by gypsy mobsters, female ninjas and other villains who belong in comic books, not real life;

The girl seemed clad in a black rubber membrane. Toe to throat, she wore a single skin-like sheath that slicked across lean limbs and muscles. She wore a high, shiny-black ponytail, a filigreed-blossom tattoo on her neck, and a smile like nuclear waste. Samantha’s first thought was to wonder whether they might be the same age; her second was to decide that she had never seen a more beautiful girl. Her third thought tore at her heart: who or what had created a creature so completely devoid of human feeling?


Meanwhile, across the seas in the Dwight Juvenile Justice Detention Centre, Sydney, Australia resides Luke Black. A childhood spent in foster care has taught Luke a thing or two – about never trusting anyone and always looking out for yourself. So he’s a little surprised when new inmate, Zac Nguyen, defends him during a scuffle with a fellow kid. And why Zac keeps saving his butt when a weird new inmate attacks him for seemingly no reason, after mistakenly calling him ‘Lucifer’.

‘Disharmony’ switches between Luke’s story and Samantha’s, as they both battle with mysterious foes and begin learning the secrets of their orphaned past … all the while we, the reader, are seemingly being led down the plotted path by ‘User: Intellicide’ – a mysterious narrator logged-in who needs us to know of The Telling, to understand what is coming.

If it sounds like a lot is going on in Giarratano’s debut YA book, you’d be right. She throws us into the deep end and then writes at a break-neck pace – sliding between Romania and Sydney, dropping hints of ‘The Telling’ and unwinding the complicated histories (and even more complicated destiny’s) of our two protagonists . . .

What makes ‘Disharmony’ even more complex is that as readers, we know more about Sam and Luke than they do. Our protagonist’s are living in ignorance of their true selves, and while readers are made privy to the history and mystery surrounding ‘The Telling’ and the murderous mother witch, Morgan Moreau, Luke and Sam only start to play catch-up when assassins and ninjas start coming out of the woodwork and conspiring to let them in on the secret of their lives. Heck, even readers know that Sam and Luke are twins – different sides to the same coin, an empath and a psychopath, two pieces to the prophetic puzzle. So ‘Disharmony’ feels like a lot of push and pull, between readers piecing the puzzle together and then reading how Luke and Sam are slowly coming to see the truth. . .  it doesn’t always work, this disparity between the reader knowing more than the protagonists, but it is an interesting plot twist. What’s even more interesting is how we are all waiting, with bated breath, to know more of ‘the genius’ – the third child of the prophecy who is conspicuously missing from ‘Disharmony’s’ narration.

One thing I really loved in the book was Samantha’s story, set in a Romanian gypsy camp. I’m going to reveal a guilty pleasure and say I’m a big fan of the TV show ‘Big Fat Gypsy Weddings’ – and I was really impressed at how Giarratano wrote such a true and fascinating gypsy home for Samantha. Everything from their Gaje-cons, to the lovely family community and male-dominated households was very honest and compelling. I also loved the people in Sam’s life – like Birthday Jones (his quirky real name, courtesy of a smart-aleck night nurse) a pick-pocket living on the streets. Then there’s Tamas – Sam’s crush and a veritable horse-whisperer with killer smile and allergy to t-shirts. Giarratano wrote a really vibrant community around Sam, and I look forward to how that community will hold up in the wake of Sam’s revelations. . .

Luke’s story is much bleaker – set in a juvenile detention centre and revealing the hard-knock life he has had.  Leah Giarratano is a psychologist, and I think it showed in Luke’s story, with regards to the bullying inside the government facility (from staff, as well as fellow boys), really interesting if a little disheartening. The bright spot in Luke’s story is his developing friendship with Zac – a new inmate whose rake-like vegan physique belies his whip-quick fighting skills. Luke and Zac have some fantastic moments in ‘Disharmony’, and are a great buddy-pairing. I do wish though, that the character of Luke had revealed a bit more of his psychopathic-tendencies. I don’t mean I wanted to read about him killing kittens or anything, and I’m not even sure if  Giarratano intended for readers to be guessing if Luke was the genius or psychopath (once it became obvious that Sam was the empath) – I just needed a little more evidence of Luke’s nature. It might also be because ‘Disharmony’ is told in third-person, omniscient narration that we don’t get inside Luke’s head to know how unfeeling he really is, but by the time it was revealed that he was the psychopath – I wasn’t entirely convinced.

Overall, I really enjoyed ‘Disharmony’. Giarratano has written a dark and twisted new series that’s wholly unique and has the potential for great longevity. She left enough tantalizing breadcrumbs in ‘Disharmony’ to have me eager for the second instalment, to continue Luke, Sam and their mysterious sibling’s journey to prophecy. . . and the big question remains; will their coming together bring about peace, or destruction? I don’t know, but I’m going to enjoy finding out!