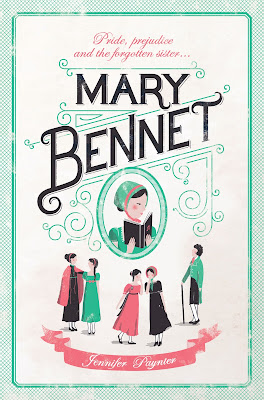 'I prayed for a brother every night. My two older sisters also prayed. They felt the want of a brother equally keenly, for our father's estate was entailed upon a male heir, and without a brother to provide for us or a rich husband to rescue us, we would all be destitute.'


Mary Bennet has been long overshadowed by the beauty and charm of her older sisters, Jane and Elizabeth, and by the forwardness and cheek of her younger sisters, Kitty and Lydia. From her post in the wings of the Bennet family, Mary now watches as Mr Bingley and Mr Darcy – and Mr Wickham – glide into her sisters' lives. While she can view these three gentlemen quite dispassionately (and, as it turns out, accurately), can she be equally clear-sighted when she finally falls in love herself?

In this elegant retelling of Pride and Prejudice, Mary at last learns – with a little help from the man she loves – to question her family's values and overcome her own brand of 'pride and prejudice'.

Poor Mary Bennet is the sister most forgotten in Jane Austen’s beloved classic ‘Pride and Prejudice’. She was the first Jan Brady; and if she had been in the Three Tenors, Seinfeld would have called her “the other guy”. Mary is firmly stuck in her ‘middle child’ role, between beautiful older sisters, Jane and Elizabeth, and her silly younger siblings, Lydia and Kitty. Austen was hardly kind to the middle bookish Bennet sister, describing her thus;

Mary, who having, in consequence of being the only plain one in the family, worked hard for knowledge and accomplishments, was always impatient for display.
Mary had neither genius nor taste; and though vanity had given her application, it had given her likewise a pedantic air and conceited manner, which would have injured a higher degree of excellence than she had reached.

If you go to the ‘Pride and Prejudice’ Wikipedia page there is a line beside Mary’s character summary that says it all; ‘She is included very little in the book.’

But the good thing about Mary is that she’s the closest thing to a clean slate that the classic has to offer – so underwhelming a character in ‘Pride and Prejudice’, who is often overlooked (or turned into a comical embarrassment in movie adaptations!) that the bare bones of Austen’s forgotten character is ripe for adaptation and reinvention. And so, Australian author Jennifer Paynter has written her debut novel around the forgotten middle sister, ‘Mary Bennet’.

The novel gives us a glimpse into Mary’s childhood, and then sweeps through Elizabeth and Jane’s courtships that became the focus of ‘Pride and Prejudice’. The story looks at Elizabeth and Mr. Darcy’s timeline from Mary’s (often scathing) perspective, and then Paynter veers off into the wilderness and writes a new destiny for poor old Mary, taking her away from the Longbourn Estate and travelling to colonial Australia.

Mary wasn’t just an overlooked character because she was stuck firmly in the middle of the rambunctious Bennet family – it was also the case that Jane Austen did a bit of a character assassination on Mary. She’s bookish and pious, thinks herself terribly wise and clever but is actually anything but. It’s a tough gig to write about such a prickly character whose very off-putting nature is sort of her only characterization . . .  Paynter had her work cut out for her because, while it was all fine and well for Ms Austen to make Mary thoroughly unlikeable, when she’s the heroine of her own story as Paynter as made her, you sort of have to make her likable to be readable. I don’t know if Paynter entirely succeeded. There were times when I wanted to reach into the book and give Mary a jolly good slap. But I can’t deny that parts of Mary’s prickly nature were explained, quite satisfactorily, and she did garner some sympathy from me. . .

Paynter does a fine job of writing back-story for Mary, who seems to have had the weight of the Bennet family resting on her shoulders from birth. Mr Bennet put all his hopes and dreams on Mary being a boy, and heir to the Longbourn estate. Thus, when Mary was born she seems to have been a thorough disappointment – and, unfortunately, Mr Bennet only seemed to have reconciled his wishes for a boy by the time Lydia and Kitty were born;

'And how will you like having a little brother, Lizzy?' he would say, whereupon Elizabeth would clap her hands. 'But it may be you'll have to make do with another sister.' At which Elizabeth would frown and shake her head. I am told this caused my father much amusement.
He was not amused however to hear of my own arrival—telling my aunt when she tried to sympathise: 'Mrs Bennet will bear me a son eventually, depend upon it. And if she does not, I can always divorce her, like King Henry the Eighth.'
I am told Papa made these sorts of remarks more often after I was born. He had always enjoyed teasing Mama, but hitherto his jokes had been good-humoured. Mama, of course, was incapable of laughing at herself even at the best of times (a failing my father believes I have inherited), and soon tears and hysterics became the rule at Longbourn, my father spent more time than ever in his library and the Bennets could no longer pass for a happy couple.


Sadder still is the story that when Mary was a month old, her mother’s nerves got the better of her and Mary was “farmed out” to a wet nurse by the name of Mrs Bushell (whose husband was gamekeeper at the Great House of Stoke). Mary recollects that she spent a good deal of time with Mrs Bushell in her infancy, even after she was weaned. Mary eventually returned to her family and the Longbourn estate, but the Bushell’s continued to have an impacting influence on Mary – when she came to witness Mr Bushell’s drunken state, and consequently become terrified of men. And then there is Peter Bushell, the gamekeeper’s son. Peter proves an interesting influence on Mary, and he is the object of her (prickly) affection.

No doubt Elizabeth and Mr. Darcy are the benchmark for any Austen-inspired romances. I can’t say that Peter and Mary were as splendid a couple, but I certainly enjoyed reading their romance in this story. Paynter stays true to the original message of ‘Pride and Prejudice’, in writing the courting of Mary by Peter – possibly because in this instance, Mary is the Darcy to Peter’s Elizabeth? She is the stand-offish one who we come to slowly care about and come to understand and forgive. . .

One thing I really loved in ‘Mary Bennet’ was Jennifer Paynter’s enviable Austen voice. The novel really does have an authentic echo of Ms Austen, and that seamless voice makes it easier to get lost in the adaptation. If the novel falls short it’s only because Paynter was too true to Austen’s original Mary Bennet – continuing with her off-putting, high and mighty nature that made her the very unlovable middle sister in the first place. I think Paynter’s prose and narration were authentic enough to warrant a little more of her own characterizations for Mary, that didn’t so closely adhere to Austen’s original blueprint.

All in all, ‘Mary Bennet’ is an interesting and thoroughly believable re-imagining of Jane Austen’s oft-overlooked Bennet sister. Paynter’s voice is so very, lovingly Austen-esque that you can really imagine ‘Mary Bennet’ to be the story she would have written, if she had been so inclined to be a little bit kinder to the “only plain one in the family”.