'The Golden Day' by Ursula Dubosarsky 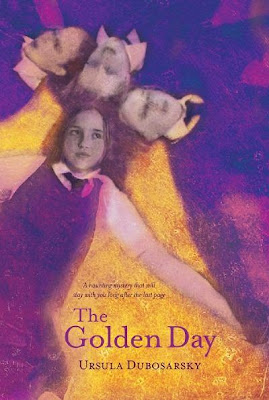 There were only eleven of them, like eleven sisters all the same age in a large family. Because it was such a very small class, they had a very small classroom, which was perched at the very top of the school - up four flights of stairs, up in the high sky, like a colony of little birds nesting on a cliff.

'Today, girls,' said Miss Renshaw, 'we shall go out into the beautiful Gardens and think about death.'

In the Gardens they meet a poet. What follows is inexplicable, shocking, a scandal. What really happened that day? Is 'the truth' as elusive as it seems? And do the little girls know more than they are letting on?

The Vietnam War rages overseas, but within the confines of a girl’s school in Sydney, a classroom of eleven girls are listening as their teacher, Miss Renshaw talks to them of death and hanging, injustice and the need to be open-minded.

The eleven little girls, in their matching ginghams and straw hats, take Miss Renshaw’s words very seriously. And when Miss Renshaw asks them not to tell their parents or other teachers about Morgan, the little girls are determined to keep their teacher’s secret; “our little secret.”

Morgan is the poet who tends the grounds of the Ena Thompson Memorial Gardens. He is a conscientious objector, and he has an owl’s voice.

Georgina swears she saw Morgan and Miss Renshaw kissing in the gardens, but nobody believes her.

And then one day, on another poetry outing with Morgan, Miss Renshaw takes the girls down to the rocks, to see a cave with artwork by the Aborigines inside. All eleven girls troop down to the water’s edge, holding on to their straw hats in the strong breeze, they enter the cave… and when they emerge, Miss Renshaw and Morgan are nowhere to be seen.

A search begins, but the girls cannot tell. They cannot tell their teachers, parents or even the police about Morgan… because he was their little secret with Miss Renshaw.

‘The Golden Day’ is a children’s book, written by Ursula Dubosarsky and recently named in the Children’s Book Council of Australia, shortlist of books for older readers.

This book haunts me. It’s beautifully sinister, for underneath the gorgeous prose there lays an eerie mystery. 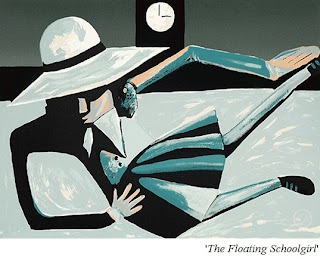 Dubosarsky says in her author’s note that the seed for ‘The Golden Day’ was planted by a Charles Blackman painting called, ‘Floating Schoolgirl’. But she was also inspired by a collection of sad and sinister real-life stories. Such as Lennie Lawson, the painter and killer who murdered a Moss Vale schoolgirl in 1962. The disappearance of Juanita Nielsen from Kings Cross in 1975. And the disappearance and subsequent murder of Samantha Knight in 1986. All these tales of mystery and murder swim around ‘The Golden Day’ – and perhaps that’s why the book reads like it could be the true account of a murder mystery, because its seed was planted in history and inspired by true-to-life horror stories.

The book opens with Miss Renshaw talking to eleven little girls about death, more specifically the upcoming hanging of murderer Ronald Ryan on February 3, 1967 (he will be the last man hanged in Australia). It just so happens that this year, 1967, will be one marred by death for the eleven girls – “The year began with the hanging of one man, and ended with the drowning of another” – come December 1967, Prime Minister Harold Holt will drown on Point Nepean, his body never to be found. But for the eleven at this Sydney school, 1967 will be a year of death much closer to home – when their teacher Miss Renshaw vanishes, foul play suspected.

‘The Golden Day’ is wonderful. It’s amazing that Dubosarsky creates a feeling of creeping catastrophe from the first line, but still manages to lull readers into the story, capturing a moment from her own childhood in a 1967 Sydney school, and the class of eleven girls who are like their own little family.

The setting of the Sydney school read like my own experience. I attended a private all girl’s high school on the Mornington Peninsula. I wore checkered ginghams (dresses) and straw hats were compulsory. My school was situated on a hill, and overlooked Port Phillip Bay, with the city of Melbourne in the distance. There is even an old school song called ‘The Little Grey School by the Sea’. So I found it quite eerie how similar my school was to the one in ‘The Golden Day’;

Because it was such a very small class, they had a very small classroom, which was perched right at the top of the school. Up four flights of stairs, way up in the sky, like a colony of little birds nesting on a cliff,  blown about by the wind with the high, airy sounds of the city coming up the hill in the ocean breeze.


Reading ‘The Golden Day’, I was transported to my own school days when the world behind the gates seemed far removed from reality. I could almost feel that old straw hat sitting atop my head, and smell the breeze from the bay that filled the classrooms… 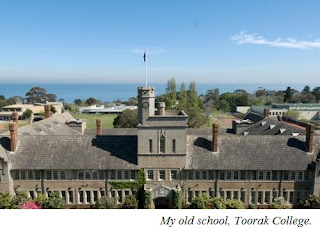 Dubosarsky’s novel is told in third-person, but pays special attention to two of the eleven girls – Cubby and Icara. They have been friends since the first day of school, and while they are not particularly close outside of the school gates, Cubby and Icara have a special bond;

'Far-flung,' wrote Miss Renshaw on the board in yellow chalk. Miss Renshaw had large, round, sloping, marvellously neat blackboard writing. Nobody could write on the blackboard like Miss Renshaw. 'Icara is far-flung.'
Far-flung
But with Cubby, Icara was not far-flung. She was nearby-close-at-hand-a-stone's-throw-away. They were friends without either of them really knowing why. It was as though, after that first day when Icara had taken Cubby's frightened hand, she had never let it go. Cubby and Icara could sit together in the playground or on the bus or in the library not saying much for hours, just a lovely rhythmic silence, like the sound of breathing when you're asleep.


When Miss Renshaw disappears after their outing with Morgan, Icara is the first to suggest she may be dead. Other girls protest and proclaim that Miss Renshaw will return… but the years tick away to 1975, and she never does.

I could not put down Ursula Dubosarsky’s book. It really is an absolute marvel – at once beguiling and beautiful, full of rich prose and wonderful characterizations. But when the story turns dark and foul play is afoot, Dubosarsky did an equally wonderful job of chilling me down to the bone, and making my hair stand on end. I think this book has one of the best endings I have ever read – wickedly delightful!

At one point in the novel, Cubby remarks that history doesn’t seem real, almost like a hoax; “Millions and millions of people, living and dying. It’s sort of unbelievable. How could the world have so many people in it?” – and I think that’s the crux of the story. The disbelief in our own history’s – that memory is ravaged by time, truth and fiction blur and our own past’s can seem so much like someone else’s story… and, sometimes, those stories haunt us.