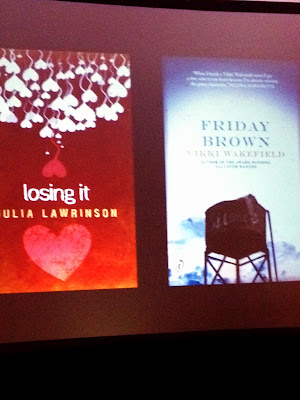 One of the reasons I love Melbourne Writers Festival? You can walk out of one session, spy another author you love and decide to follow and let them lead you to another equally enchanting event . . .  that’s what happened to me on Tuesday. I had just finished the ‘Meet Melina Marchetta’ talk and went down to the signing area, where I spied Vikki Wakefield dashing to the Yarra Building for the ‘Hard Lines’ discussion with Julia Lawrinson.

Being a big fan of both Vikki Wakefield and Julia Lawrinson, of course I decided to follow her to ‘Hard Lines’, an interesting event described by MWF as: The teenage characters in novels by Julia Lawrinson and Vikki Wakefield often face hard, sometimes life-changing, decisions. See how two authors find hope in a world that is all too real and where there are no easy answers. The event was chaired by the lovely Adele Walsh, from the Centre for Youth Literature.


•    Julia Lawrinson began by saying that she had the beginnings of the ideas for ‘Losing It’ after reading negative reviews of Melvin Burgess’s ‘Doing It’ – in which teenage boy’s wise-cracked foul about their exploits both imagined and underwhelming. Julia really loved the book, but thought a particularly cruel review of it was completely missing the point. She especially thought about how girls have the same experiences with regards to sex and ‘Losing It’, but people seem to think writing about it is crass or taboo. So in describing what her book is about, Julia funnily admitted that it actually sounds like “a YA version of American Pie” (a few school kids in the audience perked up at this description) but then she promised that it wasn't all about "exploding penises." HA!

•    Vikki Wakefield wasn’t sure how to describe her new book, ‘Friday Brown’ – so enticingly said it’s about street kids who take over a ghost town. Julia Lawrinson chimed in, as a fan of the book, to say it’s about a lot more than that but to even attempt to describe the explosive second-half would be to spoil the story . . . Julia did point out that the cover itself is a spoiler. I love the ‘Friday Brown’ front cover, and I especially loved when Vikki agreed that the cover is an “omen” (YES!) and actually based around events in Chapter 28, which is also the section of the book that Vikki started writing first.

•    Talk of Vikki’s cover moved Adele to mention that around the office she was calling ‘Losing It’ the ‘sperm hearts’ cover – which got many giggles from the school crowd . . . and then a delayed-reaction about five minutes later, when someone (I think it was a teacher?) let out a little “Oooooohhhhh!” when they ‘got’ it. Adele and I were actually talking to Julia about her very distinctive front cover before the session started, and she described how the Penguin design department asked her many questions about what her characters looked like (details right down to their hair colour, eye colour) but they set all that aside to create a very distinctive (and, frankly, quite succinct) front cover instead. But, hey, it works!

•    Vikki spoke a lot about how she likes to write underdog characters. Really, characters only become interesting for her when they are underdogs – when you take away something like wealth, status, beauty and let them struggle with the lack. Friday Brown is really the ultimate underdog though, because Vikki took away her mother, had her living on the streets and at the mercy of a dangerous surrogate street mother. But Vikki really likes underdogs because their transformation to a strong individual by the end of the book is made all the more interesting for the struggles that came before. . .

•    I found it really intriguing that in ‘Losing It’, Julia set out to write about female sexuality and just girls in general, in a new and non-cliché way. She doesn’t like reading about one-dimensional girls who are just there as ‘objects’ on the page.

•    On the subject of romance – Vikki Wakefield admitted to being a ‘tease’ when it comes to writing relationships. She thinks that the moment a couple get together, they stop being interesting – so she tends to write everything leading up to that point, and then veer away. 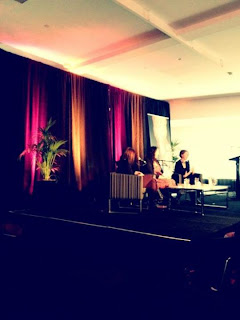 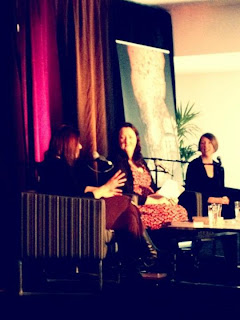 •    There was one really thoughtful question asked towards the end, concerning the TV show ‘Puberty Blues’ and the fact that the book it is based on was released in 1979. Vikki and Julia were asked if they think teenage girls have changed a whole lot between 1979 and now. Vikki made the fantastic comment that the TV show creators have changed the intent (and impact?) of the original novel quite a bit, by making the characters in the TV show 16 when they’re actually 13 in the books. Julia agreed, and said that 13-year-olds are very much doing all those confronting, questionable things and raising the age is maybe a bit sanitizing? But Vikki also said that she truly believes girls today are stronger. She doesn’t know what it is or how it came about, but girls have found a new strength from somewhere that was maybe missing for them in the 70s.

•    One school-boy put his hand up and asked the obvious of Julia – did she have a pact of her own when she was younger, like the girls in ‘Losing It’ do? I think the audience were very surprised that Julia admitted that she did indeed have a pact as a teenager – and, of course, everyone wanted to know more (the boy who asked the question said to be as detailed as possible). Julia recounted a rather hilarious story, much like the opening chapter of ‘Losing It’, which involved her climbing into the backseat of an ugly, small car with a boy . . . but ending up on her knees, praying with him that she wouldn’t get pregnant from their interlude. HA! I think the audience (pupils especially, while their teachers hid smiles behind hands?) were utterly enthralled by the enthusiasm and high hilarity of the ‘Hard Lines’ session. Julia, Vikki and Adele all bounced off one another so beautifully . . . and that wonderful repartee led into the final surreal moment of ‘Hard Lines’. . .

•    Both Julia and Vikki were introduced at the beginning of the seminar as having a small cosmic connection – which was that they had both been check-out chicks at one point in their lives (they mentioned that they both had the opportunity to closely study people and watch the world go by in that job, because customers generally didn’t think of their check-out chicks as ‘people’ they revealed some true colours and quirks around them). However, by the end of the session another connection was uncovered – Julia recently discovered (through an unsuccessful Facebook search) that her first boyfriend had spent 25-years in jail. Vikki found out that an ex of hers had been accused (not convicted?) with attempted murder! I think this was also a little insight into how differently Vikki and Julia’s lives could have been had they continued on the hedonistic paths of their adolescence . . . a path that they now both write about in their very tough, very true books but both seem quite happy to have deviated from. 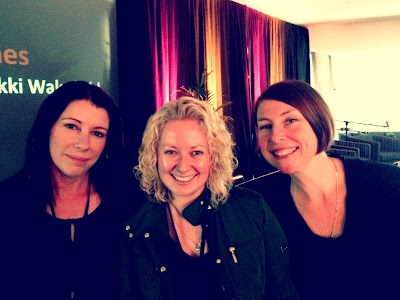 Vikki Wakefield, me and Julia Lawrinson (two of the nicest, funniest authors I have met at MWF!)