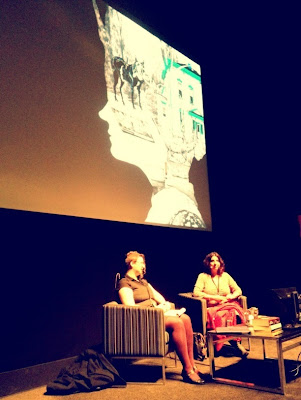 Yesterday I attended Melina Marchetta’s last Melbourne Writers Festival appearance, at the ‘Meet Melina Marchetta’ event, which was also part of the schools program. The event was chaired by the wonderful Jordi Kerr, from the Centre for Youth Literature.

This was my second Melina event at MWF, after the fantastic workshop with her on Sunday. But ‘Meet Melina Marchetta’ was a very different event, which also had an entirely different focus. . .

For one thing, ‘Meet Melina Marchetta’ was in the large ACMI building, and it was packed full of school kids out on excursion at the Festival (so jealous, by the way – I would have LOVED to visit Melbourne Writers Festival when I was in primary/secondary school!) so a very different venue from the intimate Wheeler Centre room. The Marchetta workshop on Sunday also focused on the craft of her writing, and the ‘Lumatere Chronicles’; while ‘Meet Melina Marchetta’ was very much the ‘Jellicoe’ show – and happily so!


•    As a sort of introduction, Jordi asked Melina to talk about her first book ‘Looking for Alibrandi’. Melina replied that she really thinks of her career in two sections – ‘Alibrandi’, and everything else. She wrote that book in solitude, and spent years editing and working on it with Penguin. When the book was released she calculated that she knew some 200 people in Australia, and therefore assumed that only those 200 would read it . . . so imagine her surprise when ‘Looking for Alibrandi’ not only won the CBCA Children's Book of the Year Award, but also found such popularity amongst teen readers that it was the most shoplifted book in bookstores and unreturned to libraries in Australia! Melina said that someone recently ‘psychoanalysed’ her and said that she doesn’t cope well with people’s high expectations of her – she concedes that’s very true, and ‘Alibrandi’ didn’t help matters. It’s probably why it took her eleven years to write her second book, because she said that every week for eleven years someone would ask her “are you going to do it again?”. Melina is still very humble with regards to ‘Alibrandi’s’ success; she said it just so happened to come out at the right time and hit a nerve.

•    With regards to the ‘Looking for Alibrandi’ film adaptation – the ball got rolling when producer, Tristram Miall, approached Melina with the idea to bring it to the big screen. Melina just so happened to be a big fan of Tristram’s other movie, ‘Strictly Ballroom’, and also admits that he wasn’t what she expected a producer to be (i.e.: slimy and money-hungry). He seemed to really understand the book, and was passionate about it. Melina went into the movie-making process with a very clear goal of doing justice to the Italian characters represented. She feels that so often in Australian film & TV, certain nationalities are whittled down to stereotypes (like Italians always being the ‘bad guys’ in shows like ‘Underbelly’).

•    Melina learnt a lot about writing and craft when she worked on the ‘Alibrandi’ script, with help and encouragement from the film’s director, Kate Woods. Melina says there’s a big correlation between the ‘Looking for Alibrandi’ movie being released in 2000, and her writing ‘Saving Francesca’ which was released in 2003. She just thinks that she grew a lot as a writer in developing the ‘Alibrandi’ script, and what she learnt from Kate Woods (who is attached to the ‘On the Jellicoe Road’ movie!).

•    Speaking about the award-winning ‘Looking for Alibrandi’ movie segued nicely into talk about Melina’s next (hopeful!) movie adaptation, this time of her 2006 award-winning novel ‘On the Jellicoe Road’. Jordi asked what Melina could and could not say about the movie’s status, and Melina could reveal that as of that moment ‘Jellicoe’ was on the verge of something big, as the script was about to be sent out and hopefully optioned (basically, looking for funding). Melina said she has been working on the ‘Jellicoe’ script for three years!

•    Melina does want a US distributor for the film – she says there was an option for it to be a little Australian movie (like ‘Alibrandi’) or making it for an international appeal. If they choose to go the US route, a ‘name’ actor will have to be attached – either for the roles of Taylor Markham or Jonah Griggs. Having a known actor attached will mean getting more money and attention for the film . . . but the ‘pro’ of making a little Aussie film, is that they could potentially get the casting right (instead of having to find a ‘name’ actor for the sake of funding.) Either way I got the distinct impression that this is Melina’s baby – she won’t sacrifice or cut-corners, she knows how much this book means to young readers. This thought was distilled when Melina said ‘Jellicoe’ “could be a really big film, if we get it right.” And I have every confidence that Melina will devote herself to getting it absolutely right. 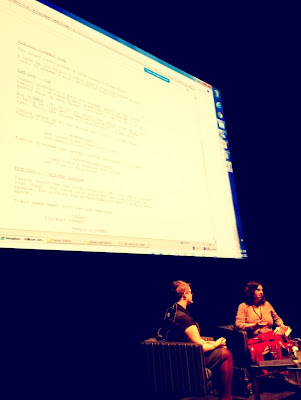 'On the Jellicoe Road' film script on the screen!

•    Then Melina put an excerpt of the script up on the big screen – which was amazing! It was the scene in which Taylor’s mother is about to abandon her on the Jellicoe Road . . . I can tell you that eleven-year-old Taylor was written to be “clutching a copy of Harry Potter in her hands” and the beautiful Cold Chisel song “Flame Trees” is playing on the radio, with Taylor and her mum singing along. The scene she showed us was short, but beautiful and it’s amazing how Melina seems to have condensed a lot of information and internal monologue into such a scene. Readers of ‘Jellicoe’ will know that the memory of being abandoned on the Jellicoe Road is more of a hazy flash-back recounted by Taylor in the book. In the movie, it’s the opening scene – but Melina has included interaction between Taylor and her mum that lets viewers know she loves her daughter, but hints that there’s more going on that will have to unravel before becoming apparent . . . it was really incredible, and I have no doubt that Melina Marchetta has again done justice to the film adaptation of her book, just as she did with ‘Alibrandi’. Also interesting to note that the film script is 139 pages, with each page being about 1 minute of screen time.

•    In writing the ‘Jellicoe’ script the hardest thing Melina had to do was keep everything in that readers love – but work around the fact that lots of those beloved moments sprout from Taylor’s inner thoughts, memories and monologue. The ‘Jellicoe’ movie will have no voice-over, so Melina had to find other ways of incorporating those events . . . she has done so by including things like a letter written to the boy she loves, and cutting out the character of Sam (he appears at the very end). But don’t worry – Melina really hasn’t cut the important bits that readers love: Hannah is still there, so is Santangelo and Raffaela.

•    Somebody in the audience asked if Melina would ever write Hannah’s book (in the ‘Jellicoe’ novel, the character of Hannah has a half-finished manuscript recollecting the awful and wonderful events from her childhood). Melina said she won’t, because it would just be too hard for her to revisit those raw, emotional and terrible moments. She said they were hard enough to write the first time around.

•    Then Melina said she is also working on a ‘Jellicoe’ TV series, set five years after the events of the book and concerning the war. She described it as “a teen version of ‘The West Wing’” (for the scheming and focus on whip-quick dialogue). OH. MY. GOOD. LORD! I’m hoping and praying for a ‘Jellicoe’ movie first and foremost, but with a teaser like that I’m also ridiculously keen for a TV show! Melina also touched on the fact that many people are unsure of the heightened reality of ‘On the Jellicoe Road’, and how that will work for film/TV – but as Melina said, she’s not a fan of reality TV (that’s her life, that’s boring, not transportive) and she likes to watch shows and movies that are full-on and high-stakes.

•    Towards the end of the session, I actually stuck my hand up to ask a question of Melina (big deal for me – in a room packed full of schoolkids and knowing the session was being recorded for posterity!) I asked Melina the story of her receiving the phone call to say ‘Jellicoe’ had won the (2009) Michael L. Printz award, and how winning had changed her international profile. Melina told the very funny story of receiving the phone call about winning the Printz award, but after hanging up she assumed the person on the other end had meant she’d been shortlisted, not ‘won’. She then had to stay up all night until the winner was officially announced in America (and she could share the embargoed news) she managed to stay awake by watching the comedy ‘Tropic Thunder’. On the subject of how winning the Printz changed her international profile, Melina maintains that Americans more readily embraced ‘Jellicoe’ (and her fantasy, ‘Lumatere Chronicles’ series) because they’re used to that big, exaggerated storytelling style; whereas Australian fiction seems to favour down-to-earth, relatable material.  But she said that by the time she received the news of the Printz award, ‘Jellicoe’ had also been embraced by Australian readers.

•    I guess I asked this question, because I found it quite a lovely dichotomy that after Melina’s Sunday event, in which she spoke at length about the initial negative reactions to ‘On the Jellioe Road’ (and that one awful co-worker who told her he threw it across the room rather than read it) that today I was in a room with hundreds of schoolchildren who were so enthusiastic about ‘Jellicoe’ and kept asking questions about the movie adaptation! It was a true testament to the fact that, even though ‘Jellicoe’ may not have had the easiest start, it has since grown and arguably become Melina’s most popular and powerful work to date.

As a small P.S. – I also really enjoyed this event because I met up with a fellow blogger (Bree, of 1girl2manybooks fame!) and bumped into some people I know from Twitter. And a couple of times while walking around the hustling and bustling Fed Square building, I had to stop and stare at the masses of schoolkids who were lining up in droves to get their books signed and speak to authors (National Year of Reading is alive and well!). There’s just a lovely atmosphere around Fed with the Writers Festival – reading and writing may be a solitary experience and, heck!, even blogging about reading and writing can be a lonely solo-show . . .  so I love that this festival is bringing us bookish types together. I've had the chance put faces to Twitter-handles, shake hands with authors I've admired for a while now and just generally enjoy the Melbourne book community (which sometimes feels more like a family). It’s amazing, and definitely my favourite time of year! 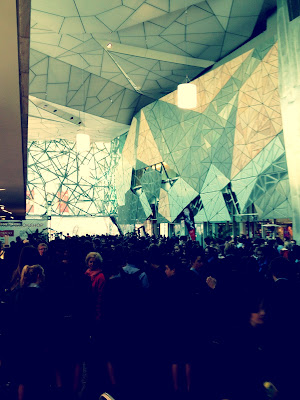 In the belly of Fed Square
Posted by Danielle at 3:09 PM