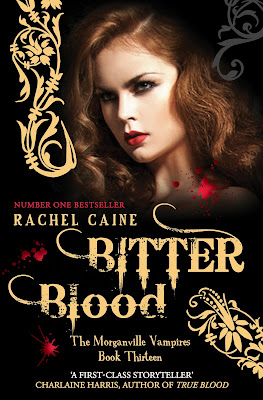 For years, the human and vampire residents of Morganville have managed to coexist in peace. But thanks to the eradication of the parasitic creatures known as the draug, the vampires of Morganville have now been freed of their usual constraints. With the vampires indulging their every whim, the town's human population is determined to hold onto their lives by taking up arms. College student Claire Danvers, with ties to both humans and vampires, isn't about to take sides.

To make matters worse, a television show comes to Morganville searching for ghosts, just as vampire and human politics collide. Now, Claire and her friends have to figure out how to keep the peace without ending up on the nightly news . . . or worse.


The humans of vampire-run town, Morganville, once thought their deadly tyrants were unbeatable. The town had once risen against their vampire foe, but were beaten down severely and put rebellion out of their heads forever. Not to mention the human residents have also paid for a bitter warfare that raged between Morganville’s founder, Amelie, and her father, Bishop.

No, if there’s one thing Morganville has taught its human residents it’s that you can’t beat them, and you wouldn’t want to join them.

But then something changed – a new enemy came to town and was a great threat, not just to humans, but especially to vampires. The draug lived in the Morganville water supply; they fed on vampires and were all but unbeatable. For the first time, possibly in history, humans witnessed a villain greater than the vampires – and the draug came very close to wiping them out. Forever.

The draug would have succeeded; if it hadn’t been for the humans helping their vampire neighbours defeat them and take back the town.

It seemed that the defeat of the draug marked a turning in Morganville, and especially Amelia. The town founder could no longer ignore the fact that the food chain had to change: the vampires needed humans, and for more than just food. The draug’s defeat heralded a new promise of human-vampire peace, so decreed by Amelia.

It has been mere weeks since the draug incident, and infamous Morganville residents of the Glass House – Claire, Shane, Eve and vampire Michael – are hopeful of a new age in the vampire town. But their hopes are quickly dashed in the wake of Michael and Eve’s wedding – the first vampire/human union has been met with hostility from both sides, and the awesome foursome of the Glass House are once again relying on themselves for safety, when the death threats and attacks start piling up.

But the Glass House has also expanded – local girl, Miranda, died in the house during the draug battle and now haunts its premises as Michael once did, before turning vampire.

And while the Glass House undergoes changes – of the ghostly and honeymoon variety – Morganville is also being turned on its head. Oliver is whispering in Amelie’s ear, suggesting that the vampires should once again reclaim their place as human overlords. His pretty persuasion could see legalized hunts reinstated, which in turn insights human-supporter Captain Obvious, to again call for human rebellion.

The town of Morganville is again descending into chaos and destruction – but at who’s urging?

And the cherry on top of this swirling disaster is a television crew from a popular ghost-hunt show coming to town, looking to unearth Morganville’s deadly secrets.

So much happened in twelfth book, ‘Black Dawn’, that it’s a welcome head-first jump into ‘Bitter Blood’ which is set a few weeks after that book. A mere few weeks since the vampires’ only enemy, the draug, were defeated and the vampire race gifted with a new sense of immortality. A few weeks since Michael Glass and Eve Rosser declared their undying love for one another and got married, without Amelie’s wishes, and to the disgust of vampires and humans alike.

When ‘Bitter Blood’ opens, there’s an odd mix of hope and despair in the air. Hope, because Amelie did make a promise at the end of ‘Black Dawn’ to rebuild Morganville with a more human-friendly foundation. And despair, because despite this uneasy truce between humans and vampires, the very embodiment of this olive branch is being threatened – the human Eve and her vampire husband, Michael, are being bullied and receiving death threats for their mixed marriage.

And then the creeping despair winds ever closer, as once again Caine offers alternate character perspectives beyond just Claire’s, and as she began in ‘Bite Club’, we have chapters from Amelie, Oliver, Michael and Myrnin’s. Amelie and Oliver’s chapters are particularly disturbing – as we read Oliver’s influence over Amelie, whispering in her ear that humans need to be re-taught their place in the Morganville hierarchy. Humans feel the unease in the air, and a new rebellion looms closer;

When Claire didn’t speak, Hannah shook her head, leant over, and picked up the weapon. She seated it in a holster under her arm. ‘There’s a war coming,’ she said. ‘A real war. There’s not going to be any room for people like you standing in the middle, trying to make peace. I’m trying to save your life.’
‘You always wanted peace.’
‘I did. But when you can’t have peace, there’s only one thing you can aim for, Claire, and that’s winning the war the best and maybe the bloodiest way you can.’


I had many questions after ‘Black Dawn’ and the defeat of the draug – arguably the last creatures on the planet capable of destroying vampires. I did wonder what was next; if the vampires were made to feel secure that they were top of the food chain once again. Where would the conflict be then? But pretty soon ‘Bitter Blood’ answers that question in a most resounding way – namely that vampires’ biggest threat is themselves. They are, quite literally, their own worst enemy. Power hungry hubris has been the fall of many great empires and leaders – and the vamps are no different.

Fascinating as the power-plays of the vampires are in ‘Bitter Blood’, it’s also the evolution of the Glass House gang that’s so interesting in this thirteenth book. Things undoubtedly had to change after Michael and Eve’s wedding – partly because of town hostility, but also between them. ‘Husband’ and ‘wife’ hold more weight than ‘boyfriend’ and ‘girlfriend’, and it’s interesting to see how their union is changing the awesome foursome dynamic – and also forcing Claire and Shane to ask themselves how far along they’ve come in their relationship too.

We have only two more books before Rachel Caine’s epic ‘Morganville Vampires’ series comes to a close – leaving us with a grand total of fifteen books. ‘Bitter Blood’ certainly ends in such a way as to let fans know that Caine is gearing up for the big finale … the ripples of change are most clearly felt in Claire, our main protagonist from book one, and by the end of ‘Bitter Blood’ she has a lot of big questions to ask of herself – where Shane, school and her own identity are concerned. I’m sad to think that the end is nigh for ‘Morganville Vampires’, a smart young adult vampire series that I’ve been reading and loving since 2006 – but I am most intrigued as to where Rachel Caine is leading Claire, and readers, on this path to finale… 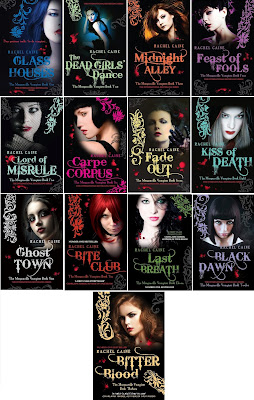