‘Saga’ Volume One by Brian K. Vaughan and Fiona Staples 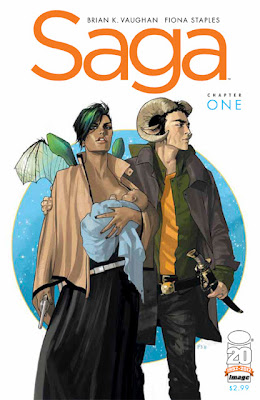 From New York Times bestselling writer BRIAN K.VAUGHAN (Y: THE LAST MAN, EX MACHINA) and critically acclaimed artist FIONA STAPLES (MYSTERY SOCIETY, NORTH 40), SAGA is the sweeping tale of one young family fighting to find their place in the worlds. When two soldiers from opposite sides of a never-ending galactic war fall in love, they risk everything to bring a fragile new life into a dangerous old universe. Fantasy and science fiction are wed like never before in a sexy, subversive drama for adults. This specially priced volume collects the first arc of the smash hit series The Onion A.V. Club calls "the emotional epic Hollywood wishes it could make."

We meet Marko and Alana the day their daughter is born. In the back of an old body shop, on a star called Cleave, little Hazel is born to parents who were once on opposite sides of an ages old war. Now, with the birth of their hybrid daughter, Marko and Alana’s old armies have even more reason to find the new family and end them. . .

Marko is from planet Wreath. He was a prisoner and Alana his guard; she was from planet Landfall. Both of them decided their love was more important than continuing to fight in a war that neither planet can remember the origins of.

But now Hazel has been born, and there is a buzz in the Landfall Capital. Prince Robot IV is being taken out of his peaceful reprieve and sent to hunt down Marko and Alana – making sure to end them before word gets out to either side of their AWOL treachery in the name of enemy ‘love’. Meanwhile, Wreath’s people have hired freelance assassins to kill the dissenting parents, and return with baby Hazel alive. On the case are two of the galaxy’s most successful assassins – The Will, along with his trusty Lying Cat. Then there’s The Stalk – who never misses her target.

‘Saga’ Volume One is the first graphic novel instalment in a new intergalactic series from Image Comics, with story by Brian K. Vaughan and art by Fiona Staples. 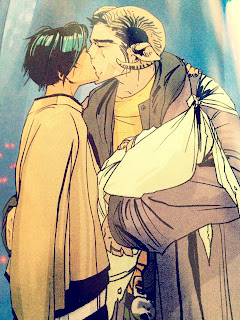 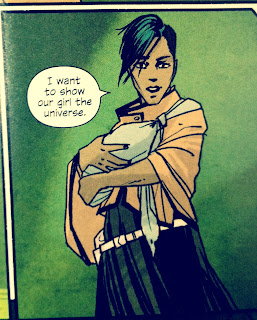 I am a fan of graphic novels – but I admit, I've been very conservative in my graphic reading habits. I tried to get into the spin-off ‘Buffy’ comic series back in 2007, because it was touted as being Season eight and I was still feeling the ‘Buffy’ void after the show’s end. But I just couldn’t get into it – Joss Whedon’s particular brand of snark works best for me on TV. So then I limited my reading to graphic adaptations of the book series I already loved – Diana Gabaldon’s ‘The Exile’ story set in her ‘Outlander’ universe. I love the graphic adaptations of Patricia Briggs’s ‘Mercy Thompson’ and Gail Carriger’s ‘Parasol Protectorate’ series. I journeyed outside my comfort zone when I read the brilliant children’s graphic novel ‘The Deep: Here Be Dragons’ with story by Tom Taylor, and art by James Brouwer. So I was well and truly ready to delve even deeper into the graphic novel world, when a blog I frequent by the name of Gawker wrote up a glowing piece on this new series called ‘Saga’. It sounded dark, smart and complex – but it was mention of a (literal) star-crossed lover’s story that really hooked me.

‘Saga’ is so, so, so good! I was laughing from the first page – and from the first panel glimpse of Marko, I was swooning. The story begins right in the thick of action – with Alana giving birth to Hazel and soldiers from both Wreath and Landfall breaking in to take the family down – because word of enemy’s falling in love and starting a family would be one hell of a bad PR campaign for this war of no end. 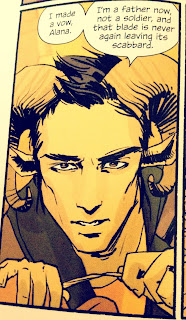 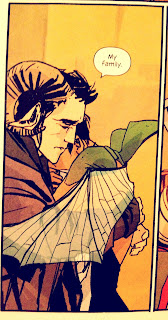 The series is very clever and makes societal and political commentaries that are reflective and relevant to the modern-day. It’s in the things like Landfall royalty, Prince Robot IV, having a television for a head – that, I think, says something about corrupt media’s tyrannical hold over society. Then there’s the pornographic planet, Sextillion, where hired assassin The Will travels when he’s down on his luck hunting the new parents and wants to drown his sorrows in sex. Sextillion is all bright lights, paid flesh and beautiful depravity – but, as The Will soon discovers, it has a sick and seedy underbelly . . . again, this is no doubt commentary on the sexualisation of our own society – and in a particularly horrendous scene, Vaughan will really have you thinking about the slippery slope of carnal consumerism.

I did appreciate how very, very clever ‘Saga’ was – for all that’s between the panels, if you will. But what made this graphic novel so brilliant was the story. In particular, I loved our narrator; an older Hazel is recounting the story of her parent’s love and her birth from somewhere in the future. She peppers her reminiscence with references to life now. At one point she muses; “From my very first day, I was pursued by men. All of them tried to hurt me, but only one managed to break my heart . . . Sorry, getting ahead of myself.” I loved that Hazel had a voice in this novel, it means that though she’s an adorable (but silent) baby when this story starts, we do get a sense of her personality through her omniscient narration – more than that, her hints about what the future holds makes me very, very hopeful for a long, epic series in which we eventually catch up in the story to follow an older Hazel. 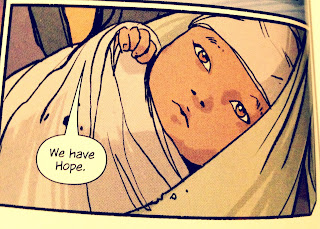 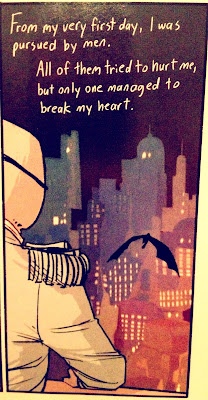 ‘Saga’ is very much an adult graphic novel (if the mention of Sextillion wasn’t enough of a tip-off). There are graphic sex scenes, and violent deaths. It’s also scary as all get out . . . when I turned the page and saw an image of spider-like assassin The Stalk I felt my palms begin to sweat. It’s really a testament to Fiona Staple’s utterly beautiful, detailed and sometimes creepy artwork. She’s amazing – and I think I will have to trawl through her backlist and read absolutely everything she’s put her artistic licence to. 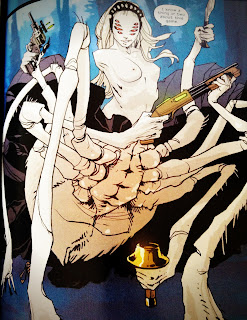 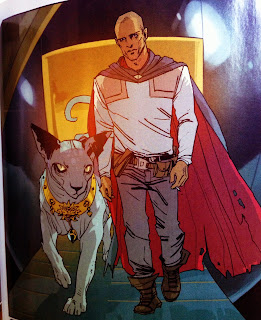 The fact that ‘Saga’ is so adult is also why I liked it so much – it’s complex and far-reaching, set on an epic scale and concerning AWOL lovers, broken-hearted assassins and royal soldiers with post-traumatic stress disorder. This is really a series to sink your teeth into. 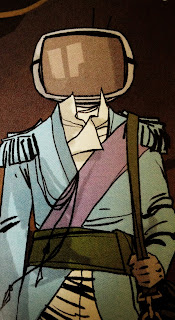 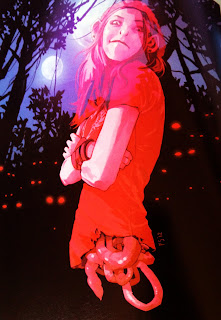 I will also say that ‘Saga’ has a very cinematic quality to it. I have high-hopes that because Brian K. Vaughan has a Hollywood history (he was a writer/producer on TV show ‘Lost’) that there is every chance this brilliant series could be adapted . . . I’m especially elated to discover that Vaughan wrote for the Buffy season 8 comic series, because while reading ‘Saga’ I kept thinking that it had a Joss Whedon quality to it – with hints of ‘Firefly’. It’s in Alana’s snarky comments, a tangled back-story between The Will and The Stalk and a clear long-reaching story arc.

I love, love, loved ‘Saga’. I’m now officially addicted. Issue number seven has recently come out, with instalment eight due later in November. I need it – seriously! It has become a delicious drug, delving into this intergalactic love story and I just can’t wait to go back. . .