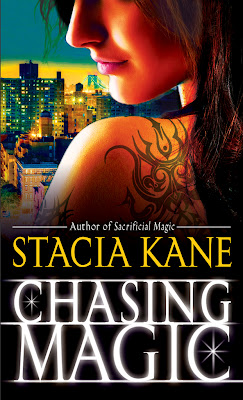 Magic-wielding Churchwitch and secret addict Chess Putnam knows better than anyone just how high a price people are willing to pay for a chemical rush. But when someone with money to burn and a penchant for black magic starts tampering with Downside’s drug supply, Chess realizes that the unlucky customers are paying with their souls—and taking the innocent with them, as the magic-infused speed compels them to kill in the most gruesome ways possible.

As if the streets weren’t scary enough, the looming war between the two men in her life explodes, taking even more casualties and putting Chess squarely in the middle. Downside could become a literal ghost town if Chess doesn’t find a way to stop both the war and the dark wave of death-magic, and the only way to do that is to use both her addiction and her power to enter the spell and chase the magic all the way back to its malevolent source. Too bad that doing so will probably kill Chess—if the war doesn’t first destroy the man who’s become her reason for living.

Chess Putnam is in a good place, quite possibly for the first time in her life. She has her man, Terrible, and her place in the Church. She may still be hooked on cepts and caught between two rival Downside gangs – but Terrible’s steady love and her purpose as a Churchwitch save Chess most days.

And then Downside begins to unravel … there’s death-magic on the streets, leaving behind living corpses and helping to fuel an already raging battle between the two men in Chess’s life –Terrible and Lex.

It’s been a while since I’ve been down to Downside, and oh! how I’ve missed it. Kane’s new novel is a wonderful melding of terror on the streets and creeping catastrophe in Chess’s own life.

The mystery of death-magic is brilliantly played out, alongside gang rivalry as Lex declares (following the death of his father in ‘Sacrificial Magic’) that Terrible can either join him, or stand with Bump against him. Considering Lex’s history with Chess, and Terrible’s jealous streak, it’s not hard to guess which side he chooses … but it puts Chess right in the middle of their warfare, and right when she and Terrible were just about past her indiscretion.

Couple this with a nasty plague of death-magic cursing the streets, which Chess has to investigate in her unofficial capacity as Churchwitch, and there’s plenty to chew on in ‘Chasing Magic’.

But with as interesting an anti-hero as Chess Putnam, it should come as no surprise that the more interesting aspect of this book is her chaotic life. In ‘Chasing Magic’, Chess’s mentor, Elder Griffin, uncovers Chess’s secret concerning Terrible and a dead psychopomp, which could jeopardize her job with the Church, and see her thrown in jail.

But even more interesting is Chess’s continuing battle with her drug addiction. For a little while now she’s been worried that Terrible, in his capacity as Bump’s right-hand-man and supplier of drugs, has all the power in their relationship because Chess is a drug addict. But in ‘Chasing Magic’ it also becomes apparent that Terrible is more concerned with her welfare than controlling her.

But what I really love about this fifth book is the few moments when Kane writes beautifully and heartbreakingly about how far Chess has come in rebuilding herself. Abused as a child, prone to self-hatred and self-doubt, her relationship with Terrible has been a big dose of good in a sea of bad for our girl Chess, and some scenes really capture how much she has gained with him (and how much she has to lose?):

His lips cut her off. Not a long kiss, or a deep one, but one that made her cheeks do that tingling have-to-smile thing anyway. “Know you ain’t, baby.”
People started filing back into the building, or at least most of them did. A few resolute smokers stayed on the patio, talking or looking up at the sky, pale and starless above the city’s glow. Chess looked up at it, too, at that blank stretch of cloudy gray covering the world like a sheet pulled over its head. It was watching her, wasn’t it? Watching her and Terrible, and for some reason the sight of it – the thought of it – made pain and loneliness twist in her chest.
Pain because she wasn’t part of that sky, would never be part of it, because it looked like a home she could never enter. She’d never know what it was like to be so peaceful. Pain because she was so fucking insignificant, so small, so worthless compared to that incredible expanse. Loneliness because she didn’t belong to it, and because she knew one day she’d be alone again, and because some deep part of her still felt alone; would always feel alone.


‘Chasing Magic’ is another thrilling instalment in what is one of the smartest and toughest urban fantasy series on the shelves at the moment. Chess’s downward spiral continues, but with moments of perfect love and clarity thanks to her equally anti-hero hero, Terrible. I can’t wait to revisit Downside again.